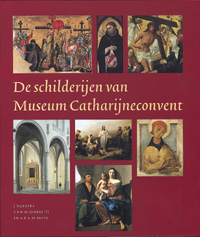 The history of the Museum Catharijneconvent in Utrecht reflects in a wonderful way the history of the Dutch religious culture in the nineteenth and twentieth century. The museum itself was founded fairly recently. Its doors opened in the completely renovated Catharijneconvent - a cloister from the Middle Ages - in 1979. Its collections, however, have a much older history, going back to the nineteenth century.

The catalogue is preceded by an informative essay on the history of the collection by Jeltje Dijkstra. The collection of paintings was put together of nothing less than nine separate collections. Most important, being responsible for three-fourths of all the paintings of the new museum, were the possessions of three independent institutions, the "Aartsbischoppelijk Museum" (Archiepiscopal Museum) in Utrecht, the "Bischoppelijk Museum" (Episcopal Museum) in Haarlem and the "Oud-Katholiek Museum" (Old-Catholic Museum) in Utrecht.

Of these three, the first-mentioned was the oldest, being founded in the middle of the nineteenth century. In this period the old catholic "schuilkerken" (clandestine churches) were replaced by new churches in a neo-gothic or neo-classicist style. After the Reformation, catholics were not allowed to profess their religion in public. They were compelled to hold their services in churches built within private houses, in a way that they were not recognisable from the street. At the end of the eighteenth century the ban on public catholic services was abolished. In the nineteenth century the old and rather loose organisation of the catholic communities around their "schuilkerken" was replaced by an official episcopal hierarchy with clearly defined parishes. After roughly 1850 one clandestine church after the other was abandoned for new buildings. These were often of a, for the Netherlands, unusual scale and monumentality, to compensate perhaps for more than 200 years of hidden existence.

It was not self-evident that the possessions of the clandestine churches moved to the new edifices. On the contrary, most of the old paintings and altarpieces were thought to be out of place in the new buildings and were sold, simply put on the street, or stored away in cupboards and on attics, in rectories, and other places. However, some clerics tried to save these works of art which had lost their liturgical function and collected them for a museum.

Thus, the Archiepiscopal Museum in Utrecht was founded by the chaplain Van Heukelem who showed in his own room a small collection that soon afterwards moved to the attic of the rectory of the Saint Catherine Church in 1862. Together with his bishop Schaepman, he started to collect religious works of art. Both men were rather selective in their choice, being mainly interested in medieval art. For them, only these works represented true religious art. Van Heukelem not only wanted to save works of art from the "schuilkerken", but also bought them at auctions. At the sale of the collection of Johann Anton Ramboux in Cologne in 1867, he purchased for example the wonderful "Crucifixion" by Giovanni di Paolo. The collection grew rapidly and the museum moved to an independent building. Later, in 1921, it was accommodated together with the "Stedelijk Museum" of Utrecht (now Centraal Museum) in the "Agnietenklooster". From that time onwards, the museum also started to collect modern religious art.

The history of the "Bischoppelijk Museum" in Haarlem is comparable to that of the Archiepiscopal Museum. In Haarlem it was monsignor Jacobus Graaf who, like Van Heukelem, started collecting in the 1860's. He was, however, much less preoccupied with medieval art. Graaf rummaged through the old rectories and came across paintings like the "Portrait of Nicolaas Stenius" by Frans Hals which he found crumpled on the attic of the rectory in Akersloot. The Haarlem museum started in a leaking coach-house that had been used before as a hen-house. It moved several times before it settled in a beautiful seventeenth-century house in the Jansstraat in 1893. The collection was especially strong in Dutch seventeenth-century art, with some masterworks by Pieter de Grebber and Caesar van Everdingen.

The third museum incorporated in the Catharijneconvent was much smaller than the other two. The "Oud-Katholiek Museum" in Utrecht was founded in 1924 and its stock consisted of works of art belonging to the old-catholic churches in the Netherlands. Compared to the other two museums it had a small collection, with less than forty paintings.

In 1971 the collections of these three museums were put together in a foundation, the "Stichting Het Catharijneconvent" as a first step to the new museum. At first the idea was to establish a museum of the Dutch catholic culture through the ages. However, after the State of the Netherlands showed interest in participating in the project, it was decided that the new museum should reflect the entire Christian culture of the Netherlands, catholic as well as protestant. The museum, therefore, became a typical product of the ecumenial movement of the 1970's. A special foundation for protestant art ("Stichting Protestantse Kerkelijke Kunst") was set up, with the task to acquire works of art that could be used for representing Dutch protestant culture. One can be sure that, if the museum the Catharijneconvent had not been erected in the 1970's but in our days, the state of the Netherlands would have demanded that also the Islamic culture would be on show.

The voluminous catalogue published recently is the first one to describe the whole collection of paintings of the Catharijneconvent. In addition to the data, the more than 1100 paintings are shown in black and white photographs. The preparations for this catalogue were started in 1995 by Paul Dirkse, the former curator of the Museum. Unfortunately he died much too early in 1998. The project was taken over by Jeltje Dijkstra who was assisted by Anneloes Smits and Tanja Kootte. Together they did a wonderful job.

After Dijkstra's essay on the history of the collection, all paintings are described systematically. Each entry starts with the name of the artist and the title of the work. Measurements of all the paintings are given without but also together with their frame. In case a painting still has its original frame, they are shown together in the illustration. After a short description of the picture's subject and a transcription of inscriptions and signatures, the painting's provenance and corresponding literature are indicated. In addition, information concerning technical research like infrared-reflectography, x-ray or dendrochronological analysis of the painting is furnished.

One has to be very thankful to the authors that for the first time we now have a complete overview of the collection at hand, gathering and presenting all the important data of each painting. Yet, with a book like this, it is always difficult not to ask for more. Thus, one is longing for a critical discussion of the attributions or a short summary of what is said in the literature [1]. When a painting has been examined with infrared-reflectography this is just mentioned, but nothing is said about the results. One has to guess whether there has been a visible underdrawing or not. A short summary of the results would have been very helpful. Of course, all this would have afforded much more time and space.

The catalogue is divided into three parts: paintings from 1250-1600, paintings from 1600-1800 and paintings from 1800-2001. This division is very useful, because a very large part of the collection consists of pictures by anonymous artists. Thanks to the division, the anonymous paintings of one period are grouped together and not scattered throughout the catalogue. There are, however some inconsistencies. Why, for example, is an anonymous work showing "Moses with the tables of Law" and from about 1600 (inv. no. RMCC S45) treated in the section 1250-1600, while a second version which is identical down to the smallest detail (RMCC S13) gets discussed in the section 1600-1800? Moreover, one wonders why the former is attributed to an anonymous South-Netherlandish master and the latter to an anonymous North-Netherlandish master. Instead, it seems most likely that both paintings are from the same studio in the Southern Netherlands.

The collection of the Catharijneconvent is full of surprises. For example, one can find here Ernst van de Wetering not in his usual role as an art-historian but as a painter. The last acquisition of the museum was a portrait of the former director Henri Defoer painted with a loose brush by the famous Rembrandt-scholar.

The quality of the collection is unequal. It treasures some highly important paintings, such as the gem-like Geertgen tot St. Jans, a painting of "The Baptism of the Eunuch" by the young Rembrandt and masterworks by Caesar van Everdingen, Salomon de Braij, and Pieter de Grebber. On the other hand, the museum preserves hundreds of anonymous paintings of fairly poor quality. Nevertheless, these paintings are often very interesting from an iconographical point of view. Therefore, the catalogue will be especially helpful for everybody interested in Christian iconography in the broadest sense.

[1] "The Adoration of the Magi" (inv. BMH S2010, 478-479) catalogued as an anonymous work from the second half of the nineteenth century, painted probably after a work from the circle of Rubens, is in fact a very faithful copy after a large canvas of Jacob Jordaens, today owned by the "Museum Boijmans Van Beuningen" (now on loan to the Paradijskerk in Rotterdam).