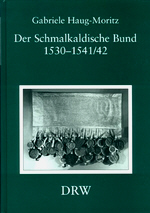 The Schmalkaldic League, the defensive alliance formed in 1531 by Protestant princes and Imperial cities and dissolved after their defeat in the Schmalkaldic War of 1546-47, played a central role in creating the space and time for the young Evangelical movement to put down roots in individual territories and cities and so consolidate itself as a political force in the Holy Roman Empire. "Die Geschichte des Schmalkaldischen Bundes", Gabriele Haug-Moritz declares in her review of the literature, "ist nicht geschrieben" (5). Not even between the formation of the Rankean school and 1918, the heyday of historical scholarship on the German Protestant Reformation, did their appear a full-scale, archivally based treatment of this first Protestant political formation in the Empire. The subject's significances had been recognized and the first documentary basis for its history had been produced already in 1617 by the Saxon councilor Friedrich Hortleder (1579-1640), whose massive collection "von den Ursachen des Teutschen Krieges Kaiser Carls des Fünfften" reproduced many documents and printed documents about the League's history. Nearly 350 years later, the redoubtable Ekkehart Fabian began to publish editions of documents and monographs on or touching on the Schmalkaldic League: at least thirteen volumes between 1958 and 1969, of which eight contained primary sources. His series, "Schriften zur Kirchen- und Rechtsgeschichte", began with his own history of the League (1958, 2nd edition 1962), which is actually a prehistory, since it goes no further than events of 1531 and, on some points, 1533; his editions of the League's first "constitution" and the recesses of the League's diets do not go beyond 1536. Otherwise, historians of the German Reformation have had to rely on studies of special subjects, such as the debate on church property, or from special perspectives (Pomerania, the Swiss Protestant cities, Strasbourg), with only a rare attempt at an overview.

Fabian collected documents, sometimes in multiple copies, from many archives, notably those of the larger Imperial cities of southern Germany. The restrictions on travel by scholars between the two German states posed a major barrier, however, because the two great depositories of documents concerning the League lay in Marburg and Weimar, where the enormous masses collected by the chancelleries of the League's two commanders, respectively Landgrave Philip of Hesse and Elector John Frederick of Saxony, housed untold riches. Among them were complete runs of the recesses, financial accounts, reports of envoys, and documentation of huge networks of correspondence among the League's members, of the princes with other Imperial princes and estates, King Ferdinand I, and the Emperor, and the correspondence between the two princes. In the months prior to the beginning of the Schmalkaldic War in 1546, the two commanders often exchanged several letters per day, most of them stuffed with enclosures containing political and military news.

The ability to work for long periods of time at Marburg and at Weimar was and is the key to any history of the Schmalkaldic League that meets modern standards of scholarship. The extent and depth of Haug-Moritz's archival research makes her Tübinger Habilitationsschrift the beginning of a new stage in our understanding of what the League was and what it did and did not accomplish. Her study rests on researches in Marburg and Weimar, plus the archives of nine other members of the League and Vienna and Brussels. The materials from northern archives are especially welcome, because the few studies of the League published since 1958 rely heavily on southern sources.

The strong archival basis of Haug-Moritz's study comes at a price. She treats the decade from the League's founding in 1531 to 1541/42. It divides into two stages. The first begins with the initial agreement (1531) and ends with the failure of the League's first recusation of the Reichskammergericht (1534) and the signing of the first constitution (1535). The second phase covers the years 1536 to 1539, when the two commanders' energetically transformed the League into a credible military presence in the Empire, based on the assignment of roles and costs to the various members and the establishment of a military council (Kriegsrat). This achievement brought success in 1541-42 to a second campaign to removed "religious matters" (mainly legal suits for the recovery of church property) from the Reichskammergerichts purview. The League's military transformation also underlie the commanding princes' conquest in 1542 (authorized by the League) of the duchy of Braunschweig-Wolfenbüttel - the high point of the Schmalkaldic League's power. Haug-Moritz's book is limited, therefore, to the League's beginnings and the era of its greatest political influence. She ends it before the League's solidarity began to be eroded by the emperor's return and his successful policy of building a new clientele in the south, Landgrave Philip's gradual detachment following the scandal raised by his bigamy, and the Protestants' inability to come to agreement on the issue of a common policy of reformation. Haug-Moritz states, correctly in this reviewer's opinion, that the League's failure to become more than a traditional association (Genossenschaft) led directly to its military failure in 1546-47. She nonetheless breaks off her analysis before this stage, and we may hope to receive from her an equally thorough and firmly based volume on the decline and defeat of the Schmalkaldic League.

Within the parameters she set for this book, Haug-Moritz offers an immense amount of information on subjects which previous writers have treated in passing or incompletely. She begins (Part A) with a detailed chronology of the League's founding and history to 1542 and analyses of the League's treaties and constitutions to 1536. She next presents the League's most difficult legal problem, the Protestants' understanding of the causa religionis as the enabling issue for joint defensive action. Part B is devoted to the League's legitimacy and its character as an association based on religion. Part C examines the League's membership in chronological and geographical perspectives, the recruitment and admission of new members, and the associative (genossenschaftlich) character of the League. Part D examines the League's structures and political culture: the members' rights and obligations, their individual relations to the League; the assembly and its procedural rules and customs, its conduct of discussions and policy formation, the role of the commanders, and the formation and functions of the military council. Part E unravels at last the mysteries of the League's finances - incomes, outlays, and taxation - a subject that has bedeviled every previous student of the League's history. Her treatment, plus the tables and notes in Appendix II, place the subject on an entirely new footing. With Part F, the book comes to the Reformation - the understanding of jus reformandi and the confiscation and regulation of church property - subjects on which some earlier work existed. Part G presents a massive proposopography of the princes and politicians (the data are in Appendix III) who made the League and made it go. Here the well known (Landgrave Philip, Elector John Frederick, Jacob Sturm) mingle with lesser known (Ulm's Besserer, Hesse's Feige, Saxony's Franz Burckhardt) and a host of quite obscure figures. Finally, in Part H the author summarizes her findings and integrates them into her understanding of the political structures of the Holy Roman Empire and of the course of the Reformation during the first decade of the League's existence.

It is impossible in a brief review to do more than suggest the wealth of material this book contains. The heart of the work consists of Parts C, D, E, and G, which treat the internal life of the League - recruitment, procedures, finances, and personnel - hitherto the most poorly documented and understood aspects of the subject. There are many corrections and revisions, but even more impressive is Haug-Moritz's digging through earlier, purely institutional presentations to grasp how things were actually done. Her work produces the first accurate account of the League's political life and the first clear picture of its finances. The parts on the League and the Reformation (B, F) are less strikingly original, chiefly because the older literature treated these subjects more thoroughly.

Neither the Reformation nor Imperial politics during this generation - the classic themes that descend from Ranke - lie at the center of Haug-Moritz's interest. What separates this book from all earlier writing on the Schmalkaldic League is her desire not only to clarify the League's place in the history of the Reformation but also "einen Beitrag zu einem besseren Verständnis des Heiligen Römischen Reichs Deutscher Nation als politischem Ordnungszusammenhang in der Mitte Europas in der Zeit um 1500 beizutragen" (569). This goal distinguishes her book from all previous studies of the League and places it in the tradition of research on "the Old Empire" as a polity formed during the late Middle Ages. It has a decisive effect on her study. The inability of the Schmalkaldic League to concentrate its powers into a new kind of German polity, which the defense of the Protestant cause seemed to call for, is explained not simply by the egoism of the member but by the form of their association. "Mit der Bereitschaft der Bündner, sich vertraglich zu binden, waren bereits entscheidende Weichen gestellt, die für den weiteren Gang der bündischen Geschichte und den Charakter des Bündnisses als Form politischer Vergemeinschaftung ausschlagebend waren" (569). Only in terms of the procedural customs and forms of legitimation particular to "dem politischen Einungswesen," she writes, "ist auch die Art und Weise, in der die Teilnehmer der Genossenschaft ihre gemeinsamen Interessen gegenüber Dritten vertreten können und wollen, nicht zu verstehen und zu erklären" (570). The "obrigkeitliche Fürsorgepflicht, (die) auch die Sorge für das Seelenheil der Untertanen umfaßt," was "der legitimatorische Kern des Bündnisses" (570). In all other respects, the Schmalkaldic League was a political "Bündnis", a type of late medieval association which Haug-Moritz distinguishes from two other ideal types, the "Bund" and the "freie Einung." Its distinguishing mark was the contractual character it acquired through the treaty that established it, and which lacked the elements of a "Bund" that might have developed state-like functions and goals. According to Haug-Moritz, the characterization of the Schmalkaldic League as a kind of "state-within-a-state" is an anachronistic postulation of modern historians, "die mit der bündischen Wirklichkeit nichts gemein hat" (578).

Quite apart from the fact that Haug-Moritz has placed the history of the Schmalkaldic League, so far as the facts are concerned, on an entirely new basis, her analysis of its institutional form and practice constitutes a major contribution of her book. Some readers will find her analysis too indebted to a particularly German tendency of social history, which sees the forms of political life as determining its possibilities, and this book is not free from the strongly structuralist tendencies of this tradition of historical analysis. Yet for Haug-Moritz this method serves as a counterweight to the common tendency to treat the League in particular and Reformation politics in general as an interplay of the actors' desire for self-advantage (the importance of which she has recognized in other studies).

Haug-Moritz's concentration on the League's political structure and culture also means that its role in the political development and fate of German Protestantism as a whole - a main concern of many earlier writers - does not figure so prominently in her book. Of course, her decision to break the League's history at 1541/42 blocks, in a sense, conclusions and speculations in this direction. Two topics in particular need to be explored. One is the light her book on the Schmalkaldic League sheds on the political character of the Empire, which suggests why the League's defeat left the power of individual members - aside from the two commanders - relatively intact. A second topic is the implications of the League's failure to achieve any consolidation on religious grounds for the chaotic condition of German Protestantism during the generation after Luther's death.

Gabriele Haug-Moritz's book sets its subject on new basis by providing the clearest and most correct picture of what the Schmalkaldic League was and how it functioned. She also presents us with a highly original analysis of the Empire's political culture as seen from this one vantage point. She nonetheless leaves us with a need for a continuation of the story, and let us hope that she will write it.