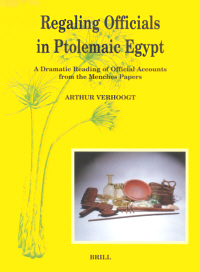 Accounts on papyri are known to be dry and uncompromising, but when we approach them beyond the textual level they can become really fascinating sources, giving a new dimension to economic and social life. Exemplarily, one might think on two recent publications on Roman and Byzantine periods. [1] A further example is the approach presented in the publication under review and dealing with Ptolemaic Egypt.

Arthur Verhoogt republishes and gives a new interpretation of five accounts from the second century BCE Menches papers. Two of the texts (nos. 1 and 4) were partially published in 1902 in the first volume of The Tebtunis Papyri while the remaining three were only briefly described.

The introduction (1-68) is divided into eight very interesting sections. The first section deals with general informations on the texts themselves. All five accounts belong to the so-called Menches papers that comprise about two hundred documents that were drawn up by or addressed to the village scribe of Kerkeosiris. Most of the documents were produced while Menches was a village scribe between ca. 120 and 110. The Menches papers were discovered inside crocodile mummies, so three of the accounts came from the crocodile mummy 28 (nos. 1, 3 and 5), one from mummy 14 (4) and one from mummy 20 (2). Most accounts deal with land and payments in kind, but these documents are all official accounts in money. So, other accounts present the result of the village scribe's work and the ones published here all illustrate the process how he reached that result. Three of the accounts are complete; they have preserved their beginnings and endings, while the other two are fragmentary. The longest text is number 1, which comprises thirteen columns (315 lines). The other two (nos. 4 and 5) are one-column accounts. The two fragmentary accounts (2 and 3) are a part of two long day-by-day accounts.

Section two is dealing with the purpose of the accounts. First three are texts detailing money received and spent during the survey of agricultural production in Kerkeosiris. Number 4 is a summary account drawn up for another official and the fifth account dates the beginning of the administrative year and lists the amount of bronze money spent in connection with the office. The survey of agricultural production was a survey operation in the fields of a village by outside officials aiming in assessing the condition of crops so that the state could compute the total dues owed by each village. Verhoogt argues that the information provided by the Menches papyri strongly suggests that these surveys were performed annually. The accounts (re)published here record receipt and expenditure in the village scribe's office during three surveys of agricultural production at Kerkeosiris. Thoroughly showing inpayments from various sources and outpayments, also varied in nature, accounts are allowing an insight into finances behind the survey. Author supposes that these working accounts were probably later used to draw up other accounts.

Section 3 is presenting method of accounting naming all the verbs and prepositions used. Fourth section "Silver versus bronze" is showing that most payments are made in bronze. It is also illustrative of the denomination of the coins used in these transactions. The greater part of the economy functioned on bronze standard, although in several occasion silver drachmas (as tetradrachms) are mentioned. In section 5 Verhoogt lists all inpayments, distinguishing ones coming from persons and the ones from pouch and storage vessel. Eleven persons contribute directly to various accounts and they are listed in Table 2. They are also subsequently named and their transactions are described. In a number of cases, money was coming from a pouch or from a storage vessel which were probably located in the village. All those amounts concerned are large. The source of that money is unknown.

Also in that way, in the sixth section, are listed all outpayments, to officials as well as other individuals. The tables and detailed descriptions are also given. This gives us an insight to the payments to village scribes, doormen and others. Often enough, there were payments to persons identified only by name and no function or occupation and with no mention of the reason for payment. Most of the outpayments are concerned with the reception and maintenance provided for the officials active in the survey and presented in a very interesting section 7. These expenses cover various food and other items as well as payments for various services (bath manager and barber). Verhoogt believes that accounts suggest that the choice of certain foods and other purchased items may relate to the rank of the official in question. In this way he argues that these accounts may well illustrate the hierarchy of different foodstuffs in Ptolemaic Egypt. In addition, the choice of some food and items may have been decided by the cultural environment of the office concerned, with "Greek" items such as garlic, wine and a chiton, all given to the officials who supposedly were or aspired to be "Greek".

Verhoogt divided this section into four headings: food, miscellaneous items, services and unknown. Entries on food reveal much about diet of officials in Egypt. Their main diet, distinctive for Egypt, consisted of bread with a fish sauce, but there were many payments for various vegetables. The most frequent item purchased was oil. Except for a couple of fowl, obtained for Mousaios, the usher of the basilikos grammateus, there are no other payments for meat. Author thoroughly listed all the food mentioned in these accounts, together with quantities and prices. Among miscellaneous item we can find household utensils, firewood and gifts. Subsequently, Verhoogt presents regaling officials visiting Kerkeosiris, describing as well their reception. Official diet is much more Greek then the one in the Memphis Serapeum and it is comparable to Zenon archive. Last, eighth, section lists all other outpayments, such as ones for writing material and loans. It is interesting to note that there is no apparent repayment of the loans in the accounts.

The second part of the book (71-200) is dedicated to publishing (or republishing) texts with translations together with vast and very useful commentary. This difficult task is an excellent piece of work. Verhoogt showed great knowledge of sources and relevant publications. At the end, there are three appendices. First (203-209) is giving 29 accounting terms with explanations. In appendix 2 (210-212) are presented payments for artabas of wheat discussed in several aspects. The last appendix (213-216) is an index of prices and payments. The book is accompanied with selected bibliography, extensive indices and five plates.

Recent publications shed new light into social and economic history of Ptolemaic Egypt [2] and this study offered a framework of everyday life of village officials opening perhaps some new discussions.