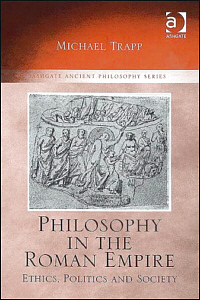 This is a most stimulating and welcome book, taking, as it does, a synoptic view of the general thrust of philosophical discourse in the period of the Roman Empire. We are already in Michael Trapp`s debt for a fine edition, with translation, of the Discourses of Maximus of Tyre (Oxford, 1997), a figure that he would himself acquiesce in characterizing as a Halbphilosoph (cf. p. 25), but none the less interesting for that as an index of popular-philosophical thought in the period, and Trapp makes much use of him in this work.

This book is a study of the central concerns of philosophy in this period, which Trapp sees as being ethics (including practical ethics), political theory, and social organisation, and featuring predominantly Stoic and Platonist thinkers (Seneca, Epictetus, Marcus Aurelius, Plutarch, Alcinous), with some input from Peripatetics such as Aspasius and Alexander of Aphrodisias, and (as sole Epicurean representative), the remarkable Diogenes of Oenoanda, and then from more 'popular' figures such as Maximus, Dio Chrysostom, Apuleius and Lucian.

One important specification he makes at the outset: what we are dealing with in this period are philosophoi and philosophia, not 'philosophers` and philosophy' in the modern sense. The distinction is important. An ancient philosophos is more (or less?) than a philosopher; he is nearer to being a sort of clergyman, since Greco-Roman religion did not (blessedly!) have an ideological priesthood to back it up, and the philosophos was therefore expected to offer moral guidance as well as theories about physics or epistemology, and to maintain a moral stance, of varying degrees of austerity, himself - and could be mocked, as by Lucian, for not living up to that. Trapp therefore prefers to use the transliterated terms in his exposition, and I agree with the wisdom of that.

The book is divided into nine chapters, the central seven taking us through the various chief topics of ethics and politics, working outwards from the analysis and moral improvement of the individual, via the question of the individual's relations to others, to the organisation of the state. Trapp moves fairly systematically through the various school traditions, generally taking the Stoics first, then Platonist and Peripatetics, and lastly Epicureans and Cynics, if either of them have anything to contribute during the Imperial period.

Chapter 2 addresses the (primarily Stoic) concepts of Perfection and Progress. Trapp takes his start from a document of (Cynic-Stoic?) popular philosophy, the Tablet of Cebes, on which he has written elsewhere [1], since it depicts life as a sort of 'Pilgrim`s Progress', and thus constitutes a good lead-in to Stoic and other theories, all of which have as their aim some sort of inner calm and imperviousness of external vicissitudes, by dint of imposing the rule of the intellect over the passions.

This leads, in chapter 3, to a discussion of the passions, and emotion in general, and an analysis of the significance of the distinction, such as it is, between Stoic apatheia and Peripatetic/Platonist metriopatheia, involving the Stoic concepts of eupatheiai and even propatheiai (though Trapp does not employ the term, p. 82). Throughout, as he notes, the emphasis is always moralistic, focussing on control of the passions, rather than on their dispassionate analysis.

This perspective obtrudes itself significantly in the approach to the next topic chosen (in chapter 4), 'Self, Person and Individual.'As Trapp notes, regretfully, the ancients did not have a developed concept of the 'self', in the modern sense. I must say that I don`t see that they were any the worse for that. What stood in the way of that was a strong distinction between soul and body, and, within the former, between rational and irrational soul. We are to be identified with the higher part of ourselves, the intellect, or rational soul. Only later, after Trapp`s cut-off point, does Plotinus begin to worry productively about where exactly the 'we' is to be situated. Philosophia, in this period, is concerned with leading us upward to our highest element, not with psychological studies of the 'self' or 'person'.It is a similar case with the 'will', which Trapp also deals with here. Greek philosophers (whatever about such a man as Augustine) never quite attain to a concept of the will as an autonomous element (prohairesis is the nearest they get), but once again I am not sure that they are much the worse. Trapp also provides a good discussion of problems with free will and necessity.

Chapter 5, 'Self and Others', constitutes a transition from the topic of ethics to that of politics. The Stoics in particular have a problem about philanthropy and care for others, since that can conflict with the ideals of self-sufficiency and apatheia. Trapp takes us through the various ways that they got round that, notably by applications of the concept of oikeiosis. For other philosophical schools it is not such a problem, though for none of them is concern for others an end in itself.

In chapter 6, we turn to politics proper, with a study of philosophical views on the ideal constitution and ruler. Here Trapp makes good use of, among other sources, the various pseudo-Pythagorean writings on Kingship, and indeed theories of monarchy prevail, naturally enough, in contemporary speculations, whether Philo, Seneca, or Dio Chrysostom, specifically the status of law in relation to monarchy and the distinction between monarchy and tyranny.

Chapter 7 takes us to the study of good communities, making much use of Dio, first his Borysthenitic Oration, and then his orations to the Tarsians and the Alexandrians, upbraiding them for frivolity and misbehaviour; but Seneca and Plutarch are also called upon. It becomes the task of the philosophos to advocate, both in private and in public, moderation, social harmony, and beneficence. Trapp accords attention also to attitudes to the poor, to women and to slaves.

Chapter 8 turns to the question of the role of philosophia itself in a well-ordered state, looking back to some extent to chapter 1. In general, philosophoi could not expect to be rulers themselves - though we have the remarkable counter-example of Marcus Aurelius - but they could hope to be advisers to monarchs and other rulers (a topic on which Plutarch has something to say, and on which Seneca has some experience, not ultimately happy), or they could be free-lance itinerant preachers like Dio and Maximus, or sedentary ones like Epictetus. In all cases, though, there remains a tension between the claims of the lives of action and of theoria.

A final chapter, on 'Philosophia and the Mainstream', brings all these themes together. Here Trapp beings with some judicious remarks on the nature of the 'Stoic opposition' in Rome, following Miriam Griffin in arguing that Stoicism was not the primary driving force behind the resistance of certain members of the Roman elite to certain emperors. He goes on to argue that there is no real anti-imperial bias in contemporary philosophy (Plutarch being a good example); the tension was really between philosophical ideals of self-control and detachment from material goods and the frivolities of contemporary society. The philosophos, like the clergyman, must always be scolding to some extent, and in return he may be mocked or even persecuted by secular interests. So what else is new?

All in all, a most refreshing and stimulating study, placing the philosophos securely in the society which he inhabited.