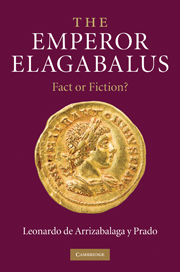 Few Roman emperors have left a reputation in which fact and fiction have become so entangled as the third ruler bearing the name Marcus Aurelius Antoninus, better known to posterity as Elagabalus. In this study, Leonardo de Arrizabalaga y Prado attempts to disentangle the knot and reconstruct the historical emperor, boldly stating that "history is about facts... no facts, no history." (6) Although many studies of Elagabalus have been published in the past hundred years, most of these have failed to make a clear distinction between fact and fiction, lending too much credence to the numerous stories of wasteful luxury and sexual scandal which characterize the ancient accounts of the emperor's reign. [1] A notable exception is Martin Frey's study, which, however, only concerns itself with Elagabalus's religious policies. [2]

Prado's book is subdivided in five parts: "Exposition" (1-24), which explains the goals and methods of the study, "Explosion" (25-56), which deconstructs the literary images of Elagabalus in Cassius Dio, Herodian, the Historia Augusta, Aurelius Victor and the Epitome de Caesaribus, "Constitution" (57-161), which attempts to extract facts about the emperor from non-literary sources, such as coins, inscriptions and sculpture, "Speculation" (162-259), which speculates about the motives of Elagabalus and those around him, and lastly "Findings in context" (260-284), which places the book's findings in the contexts of, among other things, the emperor's immediate family, the Severan dynasty and the Roman principate as a whole. The book also includes several extensive appendices (285-360) dealing with epistemological matters and providing lists of sources.

In order to retrieve the facts about Elagabalus - whom he consistently calls by his childhood name Varius, to distinguish him from the fictional creature nicknamed Elagabalus or Heliogabalus - Prado adopts a very skeptical attitude towards Roman and Byzantine authors, criticizing their inherent bias and completely dismissing their evidential status. He repeats the question posed by Arnaldo Momigliano: "how are we going to proceed where we cannot be guided by the ancient historians?" [3] Prado's answer is twofold. On the one hand, he values the literary corpus because of "its ability to generate verifiable relevant propositions." (23) On the other hand, these propositions should be tested against non-literary sources, whose evidential status can be judged by means of three "material" and eight "propositional" tests.

In "Explosion", Prado discusses the interdependency and reliability of the ancient authors who wrote about Elagabalus. Based on their works, he formulates no less than 840 propositions, ranging from the important (no. 282: "Varius intended no god to be worshipped at Rome save Elagabal") to the ludicrous (no. 20: "Varius was called Varius because Julia Soaemias had various men's semen in her") and the trivial (no. 530: "Varius changed pillows frequently"). He then judges these propositions by eight criteria: inherent verifiability, controversiality, vitality to purpose, publicity, random public contemporary verifications, risk, incentive and collusion. The results of this examination are printed in a diagram, included as an appendix (294-346), which grants each proposition the judgment T (true), F (false), U (unverifiable), V (virtually true) or O (opinion or emotion). Only the 24 "true" and 43 "virtually true" propositions will be used to reconstruct the historical Elagabalus. Unfortunately, Prado does not elaborate on his arguments for these judgments, referring to articles he has published elsewhere. As a consequence, his diagram is of little use to the reader.

In "Constitution", Prado focuses on non-literary sources: imperial coins, inscriptions, papyri, round sculpture, reliefs and topographical evidence. For each category, he performs a mental exercise, imagining what we would know for a fact about Elagabalus if no other sources were available. Although it can sometimes be fruitful to examine different categories of sources separately before bringing them together, Prado's method is counterproductive for the purposes of his study. The factual "Res Gestae" which conclude each section tell us nothing new or remarkable about Elagabalus; they only confirm such base facts as the imperial titles he bore, the names of his wives and the length of his reign. Moreover, the rigidity with which Prado keeps his sources separate prevents him from drawing conclusions that would otherwise be self-evident. For instance, in the section on imperial coinage, he cannot confirm that Julia Soaemias and Julia Maesa are the emperor's mother and grandmother, because the coins do not make this explicit. (89) At the end of the chapter, Prado compares the facts derived from non-literary sources to the historiographic record, concluding that almost all the crimes and misdemeanors attested in the latter, such as murder, rape and infanticide, are unconfirmed by the former. (157-161)

"Speculation" is more interesting than the preceding parts, since here the author abandons his quest for uncontestable facts and allows himself some room for speculation and interpretation. He plausibly argues that Elagabalus was born in Rome and raised in various parts of the Empire, only going to Emesa in late childhood. (183-205) I am less convinced by the hypothesis that the emperor's priestly garments "arguably become for him symbols of his lost freedom, wearing them in worship a bid to regain it" (243), but it is evidently true that Elagabalus used his priesthood of Elagabal as "a justification, alternative to the tale of adultery and bastardy, for his tenure of the principate". (253) It is regrettable that Prado does not spend more time exploring this notion in detail, for it is certainly one of the most interesting aspects of the young man's reign. How exactly did Elagabalus present himself as "priest-emperor"? To what extent did he envision a new religious order when he placed Sol Invictus Elagabal before all the Roman gods? Why did he marry a Vestal virgin? These questions do not receive the attention they deserve.

In "Findings in context", Prado does not only put Elagabalus in the wider perspective of the Severan dynasty and the Roman principate, but also assesses the epistemology and methodology of his study, insisting that "whatever their sources, scholars should distinguish fact from probability and possibility." (280-282) While this is undeniably true, Prado takes his skepticism too far, especially with regard to the literary sources. Is it really necessary to argue, for instance, that "universal historiographic assertion", combined with evidence from other sources, "clears the way towards considering highly likely, or even, perhaps, virtually certain, a filial-maternal link between Varius and Soaemias"? (193) How precise can the ancient historian reasonably be in establishing different degrees of veracity? Is it really meaningful to qualify a certain proposition as "at best a strong likelihood", but "not quite a virtual certainty"? (209)

In one respect, Prado's study deserves unmitigated praise. No former monograph on Elagabalus has brought so many sources together. Not only does the book list all the available inscriptions and papyri concerning the emperor, it also provides images of numerous coins, medallions and busts, some of which cannot be found in major catalogues.

"The Emperor Elagabalus" does a good job of separating fact from fiction, but Prado's rigid methodology and severe skepticism function more as a straightjacket than as helpful tools, obliging him to argue at length for things which are uncontested and do not require argument. This goes at the expense of the analysis of other, more interesting questions. The result is a thoroughly researched, but ultimately unsatisfying book.