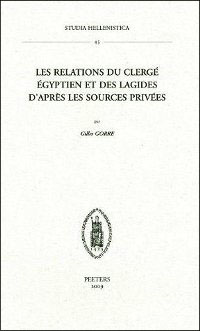 This book, the result of a dissertation defended in 2004 at the Sorbonne, presents a thorough study of relations between clergy and the state in Ptolemaic Egypt. It is based not on public documents such as Ptolemaic royal and priestly decrees, but on detailed analysis of multi-lingual sources from the personal realm, such as funerary inscriptions and ex-voto inscriptions that were drawn up by priests and/or their families. These documents that not only list personal information, but also various religious and official titles, allow analysis of the relations between priests and state on a much more basic (and interesting) level.

The book has two main parts. The first (1-450) provides a prosopographical guide of 86 individuals who have -to date- left textual evidence concerning their career and family relations. They are presented in a geographical manner, starting in the South (Philae) and moving North (ending in Baharia). The second part of the book consists of detailed analysis for the data from various viewpoints. Here there are six chapters. The two parts are preceded by a general introduction (XIII-XXXII), a list of abbreviations (XXXIII-XXXIV) and an extensive bibliography (XXXV-LVIII). At the end follow a general conclusion (623-630), and several indices (631-641).

The prosopography lists each of the 86 individuals with first the known information about the person, discussing his dates, place of activity, name(s) he is known by, and titles. It then proceeds with a detailed listing of the sources that mention the person under discussion with quotations from the original sources (with translation in French). Each entry ends with discussion about the individual, his relations to other people in the work, and so on. In this list it is interesting to note the various families that we can track in different stages of their history. One example (but there are more) is the family of priests in second/first-century B.C.E. Apollinopolis Magna, with four generations discussed: father Ptolemaios also called Pamenches (no. 4 in the prosopopgraphy), and sons Apollonios (no. 5) and Pasais (no. 6), and great-grandson Pasais (no. 7).

The accumulated information in the prosopography is then analyzed in the second part of the book. Here, the author breaks down his main research question in various typological and chronological parts, before proceeding to the general conclusion. He first considers how precisely ties between priests and state can be expressed (Chapter I). In this chapter he makes an important contribution to discussions about how precisely Greek and Egyptian terms are equivalent or not, in particular for the Egyptian title "royal scribe" versus the Greek basilikos grammateus. The second chapter discusses the chronological spread of the documents. Chapter III then discusses the period just after the Greeks arrive in Egypt, and compares and contrasts priestly relations within the Persian occupation with those within the early Greek occupation.

The next three chapters of the analysis contrast the state officials active in the temples and priests active in the administration in more detail. First the author discusses the role of state officials (largely coming from the new Greek-Egyptian elites) in the temples (Chapter IV), and then, conversely, the role of priests in the service of the Ptolemaic State (Chapter V). The final chapter presents the highpriests of Ptah in Memphis, and thus presents an interesting case study of everything that has been addressed in the preceding chapters.

Although the sources are pretty dry, the author's presentation is quite engaging, and is helped by the clear tables that visualize the patterns that he is exposing. For example, the sources clearly show a very Egyptian religious clergy at the beginning of the Ptolemaic period, with no official functions that are representing the state present, developing into a very active role of state officials in Egyptian temples by the end of the Ptolemaic period (with the telling table on 469).

This book is clearly a massive piece of scholarship. As usual, the view from the bottom up has much to offer, especially when contrasted with the view from the top. Previous scholarship, largely on the basis of Ptolemaic royal and priestly decrees and passages from Greek historians, had posited a great clash between the Ptolemaic State and the Egyptian priests, with the latter being the main source for uprisings. What the author of this work manages to clearly show is that the private sources do not support this general picture. Here, what we see is rather co-existence of different elites (official and religious), later in the Ptolemaic period often embodied in the same person or family. Official elites can be seen to move into temple roles (both giving and receiving) in the second century B.C.E., while at the same time Egyptian priests are active in administrative roles. In addition, the private sources allow tracking the nature of relations between priests and state over the whole of the Ptolemaic period, with particular attention to first the transfer from Persian to Ptolemaic rule, and then from Ptolemaic to Roman rule, when the private sources discussed in this work disappear. This book clearly shows that relations between Egyptian priests and the Ptolemaic state were never a static affair.