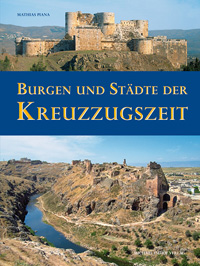 The architecture of the Crusades has long been a subject of particular interest for the history of cultural exchange between Europe and the Muslim East. It has always attracted scholars and amateurs alike, to an extent otherwise rarely seen in fields of the history, art and archaeology of the Near East. Against this background, it appears surprising that since Wolfgang Müller-Wiener's "Burgen der Kreuzritter" [1], very few works have appeared in which the state of research on Crusader architecture has been summarized on a scholarly basis. With the present book, the editor Matthias Piana, who in a conference held in 2006 had gathered a number of scholars active in the field of Crusader and contemporary Muslim history and architecture, attempts exactly such an overview. It can be said that he has succeeded very well.

The book is a collection of some forty articles covering, chronologically, the period between 1100 to 1300, and, in terms of geography, nearly the whole Levant, i.e. the territory of the Crusaders and of their immediate Muslim neighbour states. There is a clear focus on military architecture, while other classes of buildings are not completely excluded. The rich architectural heritage of the Islamic cities of Aleppo and Damascus appears in the chapters on the citadel of Aleppo, the city walls of Damascus, on the urban development and the sūqs of Aleppo. On the other hand, the dozens of religious buildings from the 12th-13th centuries, which still exist, appear only in passing. Likewise, the city of Cairo, capital of the Fatimid caliphs and object of an extensive urban development program under the Ayyubids, is mentioned in a few places, but has not been dealt with in an independent chapter. Individual articles serve to connect the Levantine scenery with other regions, such as Crusader architecture in Greece and Cyprus, and with other themes, such as the transfer of knowledge between the Eastern Mediterranean and Sicily, and the part of Armenian architects.

The individual articles, by nature, differ from each other in their focus and degree of detail, as well as their proximity to current research. According to their subjects, they can be divided into chapters covering whole periods and larger themes, and case studies on individual places, castles or towns. The latter articles form the majority. Many of them present recent research, in some cases published for the first time. In this respect, the articles on the city of Busra and on the citadels of Afāmiya, Ḥārim and Shayzar are of particular interest for the history of Islamic architecture. The articles on the cities of Tortosa, Tripoli and Sidon, as well as on the castle of Toron, all authored by the editor, are highly respectable contributions on places which are otherwise only sparsely dealt with in the literature. Overview articles like the one by Hannes Möhring on the Muslim rulers of the period, and on the history of Damascus by Heinz Gaube, can hardly be expected to present new aspects, but give a useful summary of the state of research. In general, it should be said that the quality of presentation is remarkable. Articles on single places never fail to give a historical overview, and a general description of the site; each of them is of great value for reference purposes. Errors or doubtful hypotheses are very rare. Special merits are deserved by the introductory chapter, in which the editor reports the history of research on Crusader architecture and its Islamic counterparts. This is an immensely helpful survey, not found elsewhere.

There is, naturally, not a single hypothesis put forward by this book. For the general question which is usually discussed with respect to Crusader and Islamic architecture, that of mutual influence, there are different answers, and contrasting evidence is presented: In a place like Afāmiya, with comparatively unspectacular buildings, it is in fact hardly possible to discern Islamic from Crusader elements in the fortifications. On the other hand, in some places it is surmised that Muslim influence on Crusader architecture was less intense than previously assumed.

Considering the qualities of the articles, one would have liked to read more. A study of the castle of ash-Shawbak is seriously missing; articles on aṣ-Ṣubayba and the short-lived Mount Tabor would have been fine, too. However, apart from individual places, the selection of which depends on many factors, there are also larger areas which have been spared, but which would have been important for the image of the Crusader period as a whole. Cairo has already been mentioned, and the Sinai, with the castle of Ṣadr (Qalʿat Gindī) would have offered itself for some interesting observations. Another vast field consists of the castles and citadels located in present-day Turkey, like Silifke, Anavarza, Hromklay/Rumkale, Urfa, Harran, and Tall Bāshir/Tilbeṣar. The important castle of Ravendel (ar-Rāwandān; Revanda Kalesi) is absent even from the general map at the end of the book. The section heading "Burgen und Städte der Kreuzfahrer und Armenier" suggests that it would include places of this region in individual articles, and not only in the summary chapter on Armenian construction techniques.

Thus, it becomes clear that the coverage of the book does in fact transcend the traditional selection of Crusader architecture, since many places appear in detail on which research has only recently been extended. On the other hand, the northern territories of the Crusader states and their neighbours are seriously underrepresented. The question of Armenian architects, dealt with in a single article concentrating on features of construction, can only be noted as an important aspect which requires further research. The hypothesis that Armenians played a significant part in many buildings of the period could perhaps be object to a systematic comparison between the buildings in question and material from the Armenian home regions.

It has also to be remarked that the grouping of places into a "Muslim" and a "Crusader" section is to some extent artificial, since many castles and all of the cities did have a history after the end of the Crusader Period. True, Acre after 1291 would not be of particular interest from the point of view of this book; but the article on Saône would have been considerably enriched if the Ayyubid palace, splendid evidence of the post-Crusader use of the castle, would have been presented in some detail. In the article on Kerak, this 'afterlife' appears quite well integrated. A particular case is the complex structural history of Jerusalem. Here, the buildings of the Ayyubid period offer themselves material for a discussion of mutual influence between Christian and Muslim architects; but this aspect is hardly addressed by the article on Jerusalem under the Crusaders in its brevity. A separate article on Jerusalem under the Ayyubids might have added to the perspective.

The book is richly illustrated, with good reproductions of excellent photographic material. It has to be mentioned that many of the photographs have been taken by the editor himself. In the explanatory maps, toponyms (a constant issue in Crusader history) appear in a correct transliteration of Arabic forms. A collective bibliography and a general map at the end complete the appearance of the book.

For a collective volume, the coherence and density of the book is remarkable. This is partly due to the intrinsic reason that plainly all of Crusader and contemporary Muslim architecture belong (or should belong) to a single field of research, and can be dealt with together. However, it is also due to careful editing and the sensible arrangement of subjects that a consistent whole has been achieved. The fact that the northern territories, as well as Cairo and the Sinai, are not present has little effect on the arguments and on the coherence of the presentation. There will hardly be a better overview of Crusader and contemporary Muslim architecture for the coming years. In order to multiply its audience, one should think about an English version.