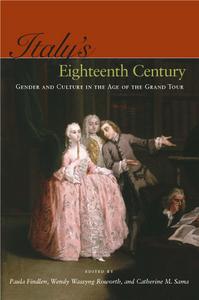 This volume explores the theme of gender and culture across disciplines; it seeks to create a conversation among scholars in the field of history, literature, philosophy, art history, and music regarding perceptions of gender in the eighteenth century. The pastorelle, filosofesse, sante, cicisbei, castrati, and even macaroni were all there to be seen in eighteenth-century Italy, and they are the subjects of the chapters of this volume.

The essays, differently structured and addressing different topics, are all set in the historical framework of the eighteenth century and focus on Italy, the privileged destination for many travellers who viewed and observed with a critical eye the customs and habits of the 'Fair Country'. The book contains comments and letters by several intellectuals travelling through Italy at the time, such as Charles De Bross, which suggest that during the eighteenth century, some Italian cities of the old regime enjoyed a culturally open atmosphere thanks to, among other things, the women who were engaged in literature and the sciences. Besides these women, other actors animated the public life of the Italian states, including the cicisbei (or cavalier serventi), the castrati - a peculiar social phenomenon -, all of whom were indigenous products and subject to erstwhile conventions destined to disappear over time. The end of the eighteenth century saw a return to a more sombre atmosphere, marked by regression in terms of both social customs and emancipation.

The volume edited by Paula Findlen is subdivided in four sections: the first deals with Gender and public life, with essays on cicisbeism, life in Roman salons at the time of the Grand Tour and the Venetian Duchess Giustina Renier Michiel; the second - Women and cultural institutions - looks at women of letters and cultural institutions (Arcadia); the third - Enlightened sexualities - examines the different expressions of sexuality in the eighteenth century, with a particular focus on the phenomenon of the castrati, lesbianism - more romanticized than real -, and Anna Manzolini, an extraordinary figure from Bologna and a renowned modeller of anatomical waxworks used by the Bologna medical school; the fourth and final section - The spectacle of gender - analyses the key roles played by women in science, poetic improvisation in Arcadia, the process of sanctification of women and their artistic representation at the time of the renewal of Catholic enlightenment.

Let us now examine in more detail the topics outlined above. In the first section, Roberto Bizzocchi argues that Cicisbeism, an underrated and neglected phenomenon by the latest historiography, is in fact significant both as a social phenomenon in itself and as a stereotype of the perception and vision of Grand Tour travellers to Italy. The cicisbeo is a "human specimen specific to eighteenth-century Italian nobility" and his role may be associated with the lack of marital freedom in the old regime. The cicisbeo can be seen as a third party figure who provided a degree of equilibrium between spouses but would gradually disappear with the decline of the aristocratic family and the onset of the bourgeois family. Maria Pia Donato focuses on Rome as the privileged location of the Grand Tour, and particularly on the role played by women in Roman salons during the age of Neoclassical culture. The salons of the Roman nobility effectively reproduced a polycentric system managed from above by the papal court, in which female figures - often the nieces and cousins of popes and cardinals - were delegated the task of entertaining guests and ambassadors within a protected space while enjoying a status equal to that of a diplomatic corps. Susan Dalton closes the first section with a presentation of Giustina Renier Michiel's case as one of "ambiguity of gender norms" in eighteenth-century Venice. A patrician woman from the Venetian region, she became a dogaressa in 1779 and was remarkable for her ability to hold a political role side-by-side with that of wife and mother, until her separation from her husband and the beginning of an independent life.

In the second section of the book, Elisabetta Graziosi examines the Arcadia institution between the seventeenth and eighteenth century as an academic establishment for the cultural education of women, and, to that extent, an alternative to the more widespread convents. Catherine Sama returns to the topic of cultural life in the Venetian Republic through the biographies of three women artists with a high intellectual profile, Rosalba Carriera, Luisa Bergalli Gozzi and Elisabetta Caminer Turra. Taken together, their lives span through a whole century, and their respective biographies provide us with a definition of concepts of 'femininity'. Rosalba Carriera excelled in painting, Luisa Bergalli in the cultural direction of theatres, and Elisabetta Caminer in translation and journalism - all areas which made Venice one of Europe's cultural capitals. Wendy Wassyng Roworth revisits the role of Angelica Kauffman in Rome, her literal location - the importance of the house she lived and worked in, as well as her symbolic place within the history of art in that city.

The third section deals extensively with the castrato, the third figure in the panorama of different sexes of the time and a helpful one to reconstruct the history of sexuality. The history of the castrati began in the seventeenth century when they were used to boost the numbers of boy sopranos in the papal chapel. At the beginning of the eighteenth century, however, their economic independence and social importance grew as they performed in theatres across Italy and abroad. Martha Feldman investigates the myths surrounding their origins and the kinds of family ties they contrived in order to conceal the past. She provides an extremely interesting analysis of eighteenth-century visual caricatures and literary satires, where castrato is depicted with analogies to farmyard animals and the mask of Pulcinella. Roger Freitas adopts a different approach and sees the castrato not as a neutral entity useful to convey an extraordinary sound but as a sexually desirable being on account of his physical peculiarities as a young, erotically attractive, effeminate character.

Paula Findley skilfully combines various research areas, from comparative literature to the history of publishing, the history of the sexes, and of dressing up - all set in Italy but with significant consequences for publishing and social life in England. Rebecca Messbarger reconstructs the history of the anatomist and wax modeller Anna Morandi Manzolini (1714-1774), an exceptional woman - somewhat oddly sought out by Grand Tour travellers - who conceived a new way of representing sensory organs, the brain and male sexual organs. According to the author, Morandi lies at the crossroads between two paradigms: the progressive empirical mode of scientific analysis of the body and sexual difference, and the age-old "dogma of male superiority".

In the fourth section, Marta Cavazza deals with the women scientists Gaetana Agnesi and Laura Bassi, whose knowledge was admired as well as a spectacular. Their different behavioural paradigms produced different outcomes: on the one hand, the brilliant career of Laura Bassi, a philosophy graduate and the first woman professor at the University of Bologna, and on the other, the equally eminent scientist Maria Gaetana Agnesi from Milan, extolled for her culture of the family but demure and destined to lead a life of seclusion, devoted to charitable institutions. Paola Giuli deals with Arcadia and improvisation, with a particular focus on Corilla Olimpica, an expert in "extemporanea oratio" - the highest expression of virtuoso performance and creative poetic activity - who won recognition and public appreciation at the academies. Finally, Christopher M. S. Johns investigates a topic that is still very open among modernist historians, if we can talk about Catholic enlightenment, notwithstanding the many prejudices raised by Crocian intellectuals and foreign scholars against the Church. To counteract various forms of superstitious popular mysticism, the Church used painting to forge close relations with those religious orders which engaged in socially useful works.

This volume definitely deserves to be read and consulted by scholars, particularly for its focus on topics not widely addressed by twentieth-century historiography, its rich bibliography, iconography and wealth of ideas for further study of the history of women in eighteenth-century Italy.