Zsuzsanna Várhelyi: The Religion of Senators in the Roman Empire 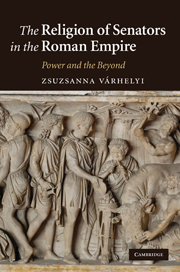 The transformation from a Republican to an Imperial system with the Roman emperor as the most powerful political and social figure in society caused a significant change in the Roman world, as its effect was felt by many different groups. Especially, the upper classes of society had to adjust to the new political situation. In regards to the religious landscape and the ways in which senators had played an important role as priests in many priesthoods the appearance of the emperor caused a change. Senators had to find different opportunities by which they would maintain a certain level of their religious power without offending the emperor. This effort of senators to find their own religion under an imperial system is the central theme of The Religion of Senators in the Roman Empire by Zsuzsanna Várhelyi. In this study, that originates in her dissertation, she offers an examination of, on the one hand, the ways in which senators functioned as a collective in religious settings, and, on the other hand, of the ways in which their individual identity was shaped by their religious activities, in the period between the reign of the Augustus and the death of Severus Alexander.

The functioning of Roman religion has gotten much scholarly attention over the past decades, and Várhelyi is careful to position herself within the existing debates. She acknowledges her debt to earlier work especially by Mary Beard, John North, and Simon Price on Roman religion, but she claims that her work will offer 'an important adjustment to their model of a marketplace of religions' (3). Furthermore, Várhelyi's work will be strongly guided by the connection between power and religion and the idea that in general social status guided the religious preferences of individuals.

Part I of the book identifies a general notion of religion for the senate as a collective and for various religious groups among senators. Chapter one seeks to position the religious aspects of senatorial identity within the larger context of the meaning of the senate within Roman society under the imperial system. Debates on social mobility - revealing for senatorial identity - in the past decades have shown that scholars have not yet reached consensus on the question if the senate was able to continue a strong ordo identity during the empire (Hopkins versus Alföldy, Hahn, Leunissen). Nevertheless, based on a detailed prosopographical analysis Várhelyi attempts to demonstrate that, contrary to what most modern scholars seem to believe, it is difficult to prove that senators of provincial origin were mostly responsible for new religious influences in the senate. Furthermore, Várhelyi presents an additional avenue of analyzing senatorial identity, by way of a sociological model that takes into account cultural factors and various human resources and networks, which would include religion (27). Her point is that such a sociological model will show how religious activities and events can function for us as markers for senatorial behavior and positions within a religious context. A further point made by Várhelyi in this chapter is that despite the position of the emperor as the main religious authority, religion was one of the 'few areas where the senate managed to maintain involvement and authority' (49). Chapter two examines religious groups within the senate and the influence of priesthoods on senators' positions. Várhelyi regards the participation in priestly colleges as a positive phenomenon for senators because the colleges offered senators the opportunity to create a communal front against the power of the emperor as it was not easy to go against the emperor individually.

Part II has a strong geographical focus as it deals with senatorial religion in Rome and Italy (chapter three) and in the provinces (chapter four). Várhelyi notices that most signs of religious activities by senators in Rome are found in connection with their magistracies, whereas there is a scarcity in display of their individual religious activities. As Várhelyi justly asks, does this mean that in the capital priestly colleges of senators were more visible than individual senators? In Italy and the provinces a different picture emerges. As Várhelyi demonstrates - well illustrated with evidence - Italy offered senators, even though Rome was in relative vicinity, a good opportunity to manifest themselves in a great variety of religious cults, in part because they were not restricted by the presence and religious authority of the emperor. When senators were present in the provinces as imperial officials, for instance as provincial governors but also as military commanders, they were expected to perform religious rituals such as the vota sollemnia for the New Year, or the dies imperii. Their presence offered them an opportunity to play a role within the local public cults, but also within the imperial cult. In this second part of the book, Várhelyi portrays senators as representing a link between the local religious practices and the larger religious context of the empire as centered on the emperor (150).

In part III, Várhelyi concentrates on the attitudes of and religious frameworks within which senators exercised their religion. In chapter five, she shows how especially mythology and philosophy offered avenues to senators by which they were able to establish a position within the net of power relations with the emperor and the imperial court. Notable in this discussion is the emphasis of the tension between senatorial freedom and imperial approval of choices made by senators. Here, and throughout the entire book, Várhelyi repeatedly stresses the limitations for senators because of the emperor's presence and role within religion (one of the reasons why, according to Várhelyi, creative use of myths by senators increasingly were confined to their private life), although one wonders if this tension in certain cases is not being overstated.

Chapter six examines the ways in which senators attempted to shape their own religious 'aspirations', as they were searching ways in which to connect to a religion that both fulfilled their own needs and met the demands of the imperial court. Exemplary for the tension between senatorial and imperial needs can be seen in senators' attempt to find ways to make worship of the emperors' genius acceptable. Similarly, Várhelyi's analysis of over fifty pro salute inscriptions for senators challenges Mommsen's view of these documents as he argued that they should be regarded as an expression of imperial ambitions of senators and which therefore should fall under the laws of treason. Instead, Várhelyi argues for a more intricate connection between senatorial and imperial religion.

In general, this clearly structured and well documented study by Várhelyi should be read by all of those interested in the functioning of Roman religion, in particular the religious practices of the upper classes of Roman society, as it offers additional or different interpretations of issues that might have had the attention of scholars in the field of Roman religion before but had not been analyzed in the ways in which Várhelyi has done.