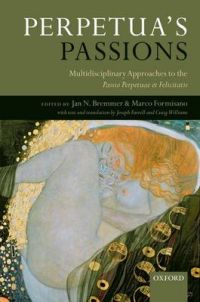 This edited collection of essays is the result of a conference held in July 2007 at the Humboldt University in Berlin. It is a volume with 'two souls: a historical one and a literary one' (7), intended not as a companion or a comprehensive critical assessment but as an experiment in challenging accepted readings and methodologies (8). Its uncanonical status, complex layering, disputed authorship, autobiographical element and rich, endlessly debateable contents make the Passio Perpetuae a perfect site for such a multi-flanked and relentlessly questioning approach. The volume hopes to push at every aspect of this text - authorship, contents, editing, transmission, reception - as well as explore new ways of reading. In particular, following recent post-modern trends in early Christian studies, the editors hope to encourage greater literary appreciation of the Passio to match the socio-historical work that has dominated scholarship on it (9). In an unusual move, the editors have invited contributions from scholars who have not previously worked with the Passio. Authors as well as approaches are thus genuinely "fresh".

The volume includes a new translation by Joseph Farrell and Craig Williams. The Latin text is also provided, taken with minimal editing from the standard edition of C.I.M.I. van Beek, Passio Sanctarum Perpetuae et Felicitas (Nijmegen, 1936). This translation may have benefited from the inclusion in the conference of a staged reading of the text, encouraging appreciation of its orality, multiple voices and intrinsic theatricality. The book includes a fairly extensive index and a bibliography of editions, translations and the most relevant studies; further bibliography is found in the extensive footnotes.

The volume contains nineteen essays, divided into three broad sections: "Part I: The Martyr and her Gender", "Part II: Authority and Testimony" and "Part III: The Text, the Canon and the Margins". Throughout, papers range from systematic historical analyses to complex anachronistic readings. In the first section, for example, Walter Ameling's essay "Femina Liberaliter Instituta - Some Thoughts on a Martyr's Liberal Education" systematically analyses the evidence for the classic assumption that Perpetua was well-educated (78-102). He concludes that there is little evidence she knew Greek (88), and that her diary defines genre precisely because she herself knew little of literary categorisation (89). In fact a 3rd century female education was a preparation for precisely those roles Perpetua avoided - being a wife and mother (102). At the other end of the wide spectrum of approaches is a reprinted article of Mieke Bal, "Perpetual Contest", which explores how "contest" characterises not only the content of the Passio but its structure too (134-149). In a deliberately anachronistic reading (134), Bal argues that Perpetua's struggles with her gender are shaped by her literary struggle in the Passio with narration (146). Her victory in the former makes her a proto-feminist heroine; in the latter a proto-post-modern (149).

"Part II: Authority and Testimony" displays the same diversity. Included here, for example, is the excellent study of the editorial introduction to the Passio by Jan den Boeft, "The Editor's Prime Objective: Haec in Aedificationem Ecclesiae Legere" (169-179). Den Boeft analyses the editor's use of rhetoric to reveal a 'shrewd polemical strategy, which has resulted in a carefully devised and well written argument' (175). Den Boeft argues that the author, who he tentatively identifies as belonging to a circle around Tertullian (176), intended to resist the idea that only old, established texts deserved to be read publicly in liturgical settings (179). Again, this sits alongside more theoretical work, for example Luca Bagetto's "Nova Exempla. The New Testament of the Passio Perpetuae". Bagetto reads the text as 'an exemplary site that intersects the law of the Roman Empire and the discourses of Messianic expectation with their promise of salvation' (254-5), and his discussion soars from late antiquity through Hamlet, to Goethe and beyond.

The third section looks at questions of transmission, reception, canonicity and marginality. The range is again extensive. Christoph Markschies' "The Passio Sanctarum Perpetuae et Felicitas and Montanism?" offers a reassessment of a common question directed at the Passio, whether it displays Montanist tendencies. He suggests that the question needs to be reformulated, and directs our attention away from 'the problematical classical heresiological framework for our perspective of Montanism' (282). Having considered the regional differences between Asia Minor and North Africa, he suggests that what we find in the Passio, particularly its introduction (285), is not so much the language of Phrygian Montanism as allusions to the spirit-orientated theology of Tertullian's house church (290). Markschies' contribution is particularly interesting when read together with Katharina Waldner's excellent earlier article "Visions, Prophecy, and Authority in the Passio Perpetuae" (201-219), which sets aside the question of specific Montanist elements and tries to place the Passio within a broader early Christian landscape of experimental attitudes towards prophecy and visions.

This final section also includes Marina Warner's "Memories of the Martyrs: Reflections from a Catholic Girlhood" (348-365). As well as exploring literary features of the Passio, this contains an autobiographical account of the text's reception in a mid 20th century Catholic boarding school. It is a fitting concluding paper for two reasons. In the first place it teases us with its echoes of the Passio itself, for example the combination of the literarily complex and the intimately personal. But it also reminds us of the concrete power of the Perpetua story and its continuing impact on modern readers.

There are a few problems with the volume. The very broad thematic division is necessitated by the papers' great diversity. Within those sections, though, reading is a slightly jarring experience. The papers could perhaps have been better ordered to encourage the reader to explore links between them. For example, Jan Willem van Henten's paper exploring the motif of motherly love in the Passio compared to 4 Maccabees complements Julia Weitbrecht's paper on maternity and sainthood in the mediaeval legend of Perpetua. Both argue that Perpetua's maternal characteristics are suppressed or neglected. The two papers are not placed next to each other, but separated by Mieke Bal's contribution, discussed above. Bal's paper, since it weaves together questions of gender and narrative authority, would seem a good conclusion to the section and a natural segway to "Part II: Authority and Testimony".

Secondly, like many edited volumes, this suffers from inconsistency. This is especially true in a volume where contributors have been asked to write on a particular text outside their field of specialism. The papers differ not only in approach and interpretation (as is to be encouraged), but also in length, scope and ambition. This can again make for disjointed reading. While this cannot be entirely avoided, it might have been helpful if, for example, contributors set out their stance on key questions at the start of their papers - for example on questions of authorship; the relationship of the Acta and the Passio etc. Some contributors do; others leave the reader to surmise whether the tacit assumptions of the author are the same as those of the previous contribution. An editorial conclusion tying contributions together, drawing new connections or contrasts between them and laying out questions arising from the volume would also have been welcome.

These partly inevitable gripes aside, the volume is a treasure trove of diverse, intelligent and exciting comment on one of the slipperiest but most rewarding texts of antiquity. Its greatest value is in the capacity for sudden gems of insight from all angles. The skill, range and open-mindedness of its contributors mean this is a volume guaranteed to be evocative for any interested reader. Though the Passio has hardly been neglected in recent years, this volume nevertheless not only gives innovative comment, but demonstrates too that there is significant scope for further research. The authors state in their introduction that they hope the Passio can serve as 'a sort of laboratory for new methods of reading' (8). Whether this book sparks such a reaction or not, it certainly resembles a scientific laboratory in both its combination of the rigorously analytical and speculative blue-sky thinking, and its potential to continually surprise and excite.