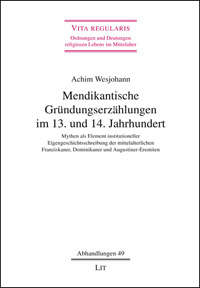 Achim Wesjohann's Mendikantische Gründungserzählungen im 13. und 14. Jahrhundert, the 49th volume in Lit's distinguished Vita Regularis series, investigates the ways in which narrative traditions shaped and sustained life in the medieval mendicant orders. The mendicant way of life was rooted in and shaped by the stories of founders whose spiritual gifts - their charismatic "excess" as Wesjohann puts it - transcended the merely exemplary. Building on Jan Assmann's concept of myth as a "founding history" that serves to shape a "normative past," Wesjohann studies how mendicant hagiography and historiography preserved, interpreted and reinterpreted a founder's charisma over time, and how individual narratives both reflected and served the changing needs and circumstances of fledgling institutions. In particular, mythical narratives supported claims to legitimacy (whether against outside critics or against divergent factions within the orders). They also provided religious with usable pasts, and with normative guidance and moral formation in harmony with their ideals.

The work unfolds as three distinct studies, dedicated respectively to the Franciscans, Dominicans and Augustinian Hermits. Exhaustive summary of a book so rich in detail is not possible here, but a few brief soundings may stand as representative of the author's method and argument, and suggest the measure of the book's many achievements.

Part I of Wesjohann's book focuses on the Franciscans. It begins with an overview of the famous "Franciscan Question," and offers a remarkably thorough survey of the main sources of the Franciscan narrative tradition. Wesjohann wisely resists the allure of endless arguments over the "authentic Francis," and over whether the later history of his order was a betrayal or a fulfillment of his ideals. Instead he asks a different set of questions. With a broad theoretical foundation in institutional sociology, he asks how Franciscan narratives reflected the distinct institutional and cultural positions of their various authors, and explores how each author negotiated, from those distinct positions, the central themes of Francis' life. Wesjohann traces how authors like Bonaventure, for example, (re)shaped inherited mythical narratives in ways that "veiled" those aspects of Francis' embrace of poverty no longer suitable to an increasingly clericalized and institutionalized order. Similarly, and even more strongly, with the ideal of simplicity: Francis' skepticism toward education and ordination, discernible in the Vita secunda, has disappeared from Bonaventure's account (284). The Franciscan evidence thus constitutes for Wesjohann one of the best examples of how the orders' narrative traditions captured, shaped and deployed the "mythical excess" of a charismatic founder in the context of an evolving institution.

Part II of the book turns to the Dominicans. Wesjohann surveys the history of the order's founding, and of some of the most important points of dispute in the historiography. He then evaluates the most important sources for the life of Dominic in those contexts, and traces again how the narratives reflected both the particular positions of their authors. Following Tugwell, for example, Wesjohann suggests that Jordan of Saxony's Libellus was written over an extended period leading up to Dominic's translation in 1233. It was a period during which Jordan himself had been drawn to and entered an established and rapidly growing order, and he found it in need of a history. In that setting, he authored a work blended historiography and hagiography, and thus appears as "one of the first protagonists in the construction of a Dominican myth, a 'myth of foundation'" (375). Wesjohann then further explores the key themes of Dominican hagiography: compassion and charity, poverty, humility and so on, in each case showing how Dominican authors (Petrus Ferrandi, Constantine of Orvieto, Humbert of Romans) sought to capture the "excesses" of their founder's charisma. The result, Wesjohann suggests, was a tradition that was on balance relatively weak and free of conflict (494-95), especially in comparison to the Franciscans. But it was a tradition that nevertheless again served to legitimate a new institution and its mission.

Part III outlines the process whereby a heterogeneous group of Italian eremitical congregations had by 1256 coalesced into a formal religious order known as the Order of Hermits of St. Augustine. In contrast to both the Franciscans and Dominicans, the Augustinian Hermits were faced with crafting for themselves a founding myth that was entirely fictional, and one that nurtured the growth of an artificially constructed congregation. Wesjohann traces how the "sons of Augustine" staked their various claims on the Bishop of Hippo, not as a literal founder of their order, but as a source of intellectual and spiritual inspiration. Jordan of Quedlinburg receives particular attention here as an author who (following Geraldus of Fracheto's accounts of the Dominicans) linked the history of the Augustinians to both the desert fathers, and to a modern mission of pastoral care. Jordan was also an author fully aware of the complexity, diversity and breaks in continuity that troubled the story he tried to tell. Wesjohann then surveys the leitmotifs of the Augustinian Hermits' narratives more broadly - the universality of the order, its mission of pastoral care, its embrace of poverty, the symbolism of its habit, its intellectual traditions. Part III concludes with the theme of "Augustinian myth and identity", centered again on the work of Jordan of Quedlinburg. Wesjohann argues (in ways that parallel recent positions adopted by Erik Saak) that Jordan at once critiqued, textualized and instrumentalized an already established mythical narrative, in ways that spoke to the everyday life of a fledgling order, and slowly shaped the identity of its members.

The story of the religious orders has long been told as one of heroic founding figures and triumphal founding narratives. This book rightly recasts the problem of founders and origins in a more sophisticated theoretical light. Here the founding of an order is not a moment, but a process, its texts the product of dialogue and tension between founder and followers, spirit and institution. Another strength of this study is its vigorous emphasis on comparative analysis. Wesjohann contrasts a multifaceted, conflicted Franciscan tradition grounded biographically (the minorites as "those who were with him") and relationally (those who were "less than" their contemporaries), with the Order of Preachers' emphasis on a mission of teaching, preaching and pastoral care. These in turn stand in contrast with an Augustinian narrative that established a link between a mythical founder and an artificially constructed but increasingly coherent order. Wesjohann's is also a model study, to note a final point, for work not yet written. Similar dynamics of charisma and institution, myth and narrative await investigation in a range of later settings: the fabricated histories of holy women like Clare or Catherine of Siena, for example, the emergence of the Observant reforms of the fifteenth century, and the longer history of founders and new orders that continued into the early modern era and across the Atlantic world.