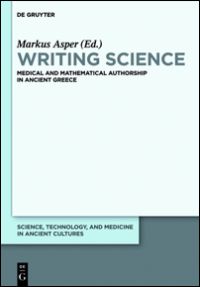 This collection of 15 essays emerged from a 2009 symposium held at NYU. The volume is the first in a new announced series "Science, Technology, and Medicine in Ancient Cultures", which aims (I quote from the cover blurb) "to advance an inter-disciplinary and inclusive approach to the study of science in the ancient world". This collection largely achieves that aim with themes familiar to historians of science: the scientific self, animal studies, circulation of knowledge, objectivity. Markus Asper's editorial introduction (1-13) describes the focus as authorship-studies or readings done in a comparative historicist mode focusing on rhetorical self-presentation and rhetoric of authority, scientific narrative and its representation. I pick out for description the papers deserving a broad readership.

Karine Chemla "Ancient Writings, Modern Conceptions of Authorship. Reflections on Some Historical Processes That Shaped the Oldest Extant Mathematical Sources from Ancient China" (63-82) considers how the history of editing Chinese mathematical texts attributed an authorship to The Nine Chapters on Mathematical Procedures. The mathematical authorship of the text became associated in time with the earlier sages. The authorship of the later additions replacing gaps in the text became associated with figures of the commentary tradition. Chemla's Sinologist perspective (while not conforming to the volume's title) is a welcome cross-cultural addition for the history of editing.

Thorsten Fögen "Scholarship and Competitiveness: Pliny the Elder's Attitude towards his Predecessors in the Naturalis Historia" (83-107) highlights the authorial strategies of Pliny the Elder by closely reading his preface and select chapters. How can Pliny claim authority if he is simply passing along the works of previous authors? The gracefulness and charm of Pliny's preface, his relation to political power, and his reference to his own other published works establish the utility of his having undertaken the synthesis for a cultured Roman elite. Pliny provides a moral authority to his scientific self.

Heinrich von Staden "Writing the Animal: Aristotle, Pliny the Elder, Galen" (111-144) displays his customary philological acumen in his discussion of how Aristotle, Pliny the Elder, and Galen authored animals. Pliny did not hesitate to give human emotions and rituals to animals such as the elephant, attributing his knowledge to other authorities and his own beliefs. Aristotle took a different approach by diagramming animals and their parts; Aristotle consistently elides his own authorial ego. Galen, unlike Aristotle and more akin to Pliny, wrote himself into his discussions of animals.

Philip van der Eijk "Galen the Scientific Treatise: a Case Study of Mixtures" (145-175) interrogates the formal generic properties of Galen's Mixtures, an example of pragmateia-writing and a foundational work of Galen's doctrines. Galen begins his treatise with many termini technici yet by the end of the treatise has developed what van der Eijk calls a "rhetoric of confidence" in which seeming objections are revealed to be in accord with the truth of Galen's doctrine. This paper is a useful documentation of Galen's authorial persona.

Reviel Netz "Authorial Presence in the Ancient Exact Sciences" (217-253) explores the dialectic between authorial presence and writtenness through statistics of surviving papyri and illustrations. Elite texts in antiquity were written not to circulate as written documents per se, but written to circulate for the purposes of performance, whether oral reading or public performance and declamation. By contrast ancient mathematical texts were written to circulate for their textual qualities: the language pointed to the embedded diagram. Netz concludes that ancient mathematics had no public performance but rather engaged in peer-to-peer communication.

Serafina Cuomo "Accounts, Numeracy and Democracy in Classical Athens" (255-278) explores the themes of authorship and readership in the numeracy of Classical Athenian inscriptions. She concentrates on the Athenian tribute lists and other examples of publically accessible accounts rendered to the city and the gods. Functional numeracy may have been higher than functional literacy; inscriptions are often formatted to draw attention to numbers. Cuomo's emphasis on readership for numerical accounts fits well the virtues of transparency and inspection the radical Athenian democracy demanded.

Apostolos Doxiadis and Michalis Sialaros "Sing, Muse, of the Hypotenuse: Influences of Poetry and Rhetoric on the Formation of Greek Mathematics" (367-409) argue that the argumentative style of the propositions of Greek geometry has a formal structure analogous to the formal structures of 5 and 4th century Greek oratory and rhetoric. Both share a narrative account of particulars and a tendency toward ring composition. While attractive, the thesis could be strengthened by comparing to contemporary rhetoric a continuous series of mathematical propositions as an example of narrative reasoning, not just deductive structures within individual propositions.

Markus Asper "Making Up Progress - in Ancient Greek Science Writing" (411-430) offers a thought-provoking typology of the narrative of progress in ancient science writers' own texts. He charts in ancient scientific texts stories of progress as growth without a defined ending, progress as closure, and progress as a return to some previous golden age. The first two narratives are compatible with various narratives of progress found in contemporary scientific texts. The third was not surprisingly attractive to a culture whose poets and mythologies treated the present age as a decline from a golden age of better knowledge and morals with a beneficent nature.

Brooke Holmes "In Strange Lands: Disembodied Authority and the Role of the Physician in the Hippocratic Corpus and Beyond" (431-472) continues her investigation into the origins and discursive conditions in Archaic and Classical Greece that were productive of the notions of body and the self. She argues that medical authority in Hippocratic texts became objective by becoming disembodied, such that the physician did not draw on his own person when diagnosing the bodies of patients. She takes her position to be a corrective of Daston and Galison's analysis in Objectivity about the ancient care of the self.

The book is well produced, including several color illustrations from manuscripts and concluding with a general index and an index locorum. A notable omission from this collection about authorship is a paper about readership in the ancient tradition of scientific commentaries. The conclusions of most papers contribute to a broader discussion in the history of science. If further volumes in the announced series are similar, they will be a welcome addition to scholarship's increasingly comparativist approach to ancient science.