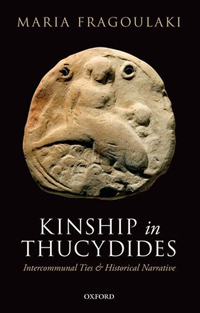 This book is a comprehensive investigation of "kinship" in Thucydides. By this term Fragoulaki means both xyngeneia, where two states or groups of people believe themselves to have a genealogical or colonial connection as well as what she terms "relatedness." Relatedness comes to be through connections like "ritualized friendship (xenia); intermarriage; proxenia; grant of citizenship (naturalization); shared cults, festivals and myths," and "the export and exchange of cultural products and forms" (5-6). For Fragoulaki, even something like Athenian drama was "an influential means of Athenian acculturation of areas on the margins of Hellenism, with which Athens pursued links very actively" (6) and so counts for "relatedness." Fragoulaki distinguishes two types of "kinship" but cautions that we should not think one more "real" than the other.

This study is welcome because Thucydides indicates a great interest in xyngeneia. For example, he notes in the catalogue of allies at Syracuse that many fought "not because of principle or xyngeneia" but for their own advantage or under compulsion (7.57.1). Thucydides thus signals that xyngeneia had formerly been a prime motivator but that times had changed. His text thus seems fertile ground for an investigation of the types of "relatedness" between Greek states, how those ties functioned in interstate diplomacy, and how practice changed over the course of the Peloponnesian war. The book addresses the first point well, and the mass of information Fragoulaki gathers is impressive. In chapters that cover first the xyngeneia and then the "relatedness" ties of Korinth, the Aiolian states, Sparta, Athens, and "the West," Fragoulaki does a good job of showing how important kinship (especially of the colonial or xyngeneia type) could be in interstate relations. Her close explication of the Kerkyraika and its paradigmatic nature for the rest of the work is extremely valuable.

However, her decision to include something like the export of Athenian drama under "relatedness" points to a potential weakness. Fragoulaki has cast her net so widely that she runs the risk of diluting her argument. There is so much information here, and so much of it seems designed merely to document the connections that may have existed between states (whether mentioned by Thucydides or not) that one loses track of what all this says about Thucydides' use of, or presentation of, kinship. I expected a nuanced discussion of what Thucydides means readers to understand about the uses, abuses, and flouting of xyngeneia before and during the Peloponnesian war, but this volume does not really provide that.

In addition, Fragoulaki sometimes seems to over read her evidence. I give one example from the very end of the work. Fragoulaki reports that as a historian Thucydides left "traces" in his text of Sicilian Egesta's "hybrid ethnicity" (315) - by which she means its "strong Greek and Dorian self" (310) together with its foreign Elymian nature. She claims, nevertheless, that as an "artful author," Thucydides emphasized the "'barbarian' side of the Egestaians in order to present the Athenians as being dragged by a barbarian ethnos into an absurd and disastrous adventure" (316). However, Fragoulaki's treatment of her evidence does not fully convince.

For example, Fragoulaki has little proof of Egesta's "strong Greek and Dorian self." She points out that Egesta used a "xyngeneia argument" (301) to the Athenian assembly when it urged them to fight against Syracuse, and argues that this "ritual plea [. . .] suggests a strongly Hellenic code of conduct" (302). But it's not clear that it shows anything more than a savvy ability to discern the arguments that would resonate most in Athens. If the appeal on the basis of xyngeneia does indicate a "strongly Hellenic code," then Thucydides has done a poor job of hiding Egesta's Greek-like nature.

Fragoulaki also suggests that the Egestaians "could have played" (302) a kinship card by referencing their Trojan ancestry. This is because, Fragoulaki reminds us, Ericthonios, a "doublet of Erectheus" (257, n. 290), was inserted into the line of Trojan kings (256-7), and so the Athenians were Trojans too and so (distant) kin to Egesta. Soon, however we hear that it is not just possible but "very probable" that the Egestaians "exploited" the Trojan myth "in their emotional appeal to the Athenians" (303). This then, for Fragoulaki. is further proof of the Egestaians' "Greek-like kinship discourse and conduct" (304). But the existence of a remote Trojan connection is no proof that the Egestaians referenced it and so no proof of their "Greek-like" discourse.

As for Egesta's "strong Dorian self" (310), we learn that "Sparta's colonial initiatives in the area [. . .] point to a much more tempered 'Otherness' for the Egestaians" than Thucydides sketches (307). Nevertheless, Fragoulaki admits not only that the Egestaians resisted Sparta's colonizing ventures but that those ventures ultimately failed. Egesta's response to the Spartan efforts, for Fragoulaki, shows Egesta's "long-standing resistance to the Dorian side of its own ethnic self" (307). But there is little evidence of that Dorian self.

It is true that Thucydides notes that "a number of Phokians" joined the settlement of Egesta and Eryx when they were blown off course on their return from Troy (6.2.3). The "Phokian-Greek element in the ethnic make-up of the two Elymian cities" then becomes, for Fragoulaki, a "superb tool" for the Egestaian's alleged "kinship argument" in Athens (309). She suggests that Alkibiades could have used this point as well (309), to counter Nikias' opposition to the Sicilian expedition in part because Athens was being called in by "barbarians" (6.2.3). Egesta's "Phokian background" - if, indeed, they thought of themselves as having a Phokian background - could have been part of a "kinship diplomacy" (309) but we have no evidence that it actually was.

Fragoulaki adduces Nikias' emphasis on the barbarian nature of Egesta as part of her argument that Thucydides deliberately hides the Greek character of the Egestaians in order to make the Sicilian Expedition look more like folly. But perhaps Nikias' point, and Thucydides' presentation, is actually evidence that the Athenians did not judge the Egestaians to be very Greek even if they did have a few Phokian ancestors.

Fragoulaki's book ought to help us to answer the question of how often Athens or other states in Thucydides seem to be moved by arguments based upon remote ties like this. For such questions - for showing, for example, how xyngeneia actually works in Thucydides - a thematic approach might have worked better. Instead, Fragoulaki discusses Athens' (or some other group's) ties to each "related" state in turn. These test cases are extremely valuable, and anyone working on Thucydides should read this book. Nevertheless, the over-arching patterns Fragoulaki sees are sometimes not as clear as one might like.