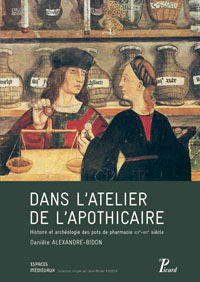 In her latest book on apothecary's vessels from the 13th to 16th century, Danièle Alexandre-Bidon presents us with an examination of objects at the intersection of medicine, pharmacy, and artisanship. In recent years, these studies have gained increasing impetus and led to new and intriguing insights. [1] The research desideratum in this area, however, still remains a considerable one because the obvious difficulties have so far prevailed: frequently, the material remains, if at all, only in fragments scattered across various collections and only partly inventoried. What is more, formerly neighbouring disciplines have become separated in present-day academia, crucially necessitating an interdisciplinary approach. It is therefore salutary that the author chooses an archaeological perspective transcending disciplines to correlate the finds with museum collections and visual as well as textual records. In past works, Alexandre-Bidon has already been concerned with the material culture in hygiene, health, and kitchen customs at the transition from the Late Middle Ages to the Renaissance, giving her ample prior knowledge to draw on for her latest volume. [2]

The structure of the book reflects its three central foci, i.e. the production of the vessels and their use, the inscriptions they bear, and finally the images they show. The beginning of the period studied is defined by the dating of the first archaeological finds; the items under examination chiefly originate from France and Italy. Already in the introduction, the reader realises that the collections kept at museums are vastly diminished compared to the original variety of pharmaceutical utensils and were corrupted by the application of aesthetic selective criteria. The definition of the term "albarello" already at the outset introduces to the reader the shape of the majority of the apothecary's pots. While "albarello" was originally reserved for round and oblong containers for ointments, the pots could be made of ceramics or wood. However, the book is also concerned with containers made of other materials (e.g. different types of metal, clay, glass, leather, and paper) as well as apothecary's furniture inasmuch as it was of significance regarding the vessels. Absent from the discussion, however, are references to containers for colorant pigments, another product, after all, stored by apothecaries. Furthermore, the author observes that wood was the predominant material for apothecary's utensils stemming from both the Medieval Period and Early Modern Times (43) and aesthetically competed with ceramics (47). The shape and the substance of the pots were determined by their content; Alexandre-Bidon therefore devotes large portions of the first part of her book to the description of medicines, their production and curative application. However, it is the every-day practices as well as the knowledge yielded by the pots with respect to the history of pharmacy that constitute the guiding principle in the entire book and continue the research tradition of the "mentalités" at the École des Hautes Études en Sciences Sociales. Following this approach, the considerations with regard to the practice of labelling the vessels with the expiration date of the medicine contained in them, which began in pharmacies during the 14th century, allow the author to pave the way to a further interesting analysis of the organisation of stoneware workshops. These often collaborated with scribes in order to be able to add details on the intended content of the vessel even before the firing of the ceramics.

The "practice of reading and writing" (125) is primarily addressed in the second part and takes up the largest portion of the volume (109-209). As part of this discussion, the author accurately investigates a variety of aspects, also giving insights into the development of the apothecary's trade: vernacular or Latin inscriptions, abbreviations, the epigraphic field, the use of Latin majuscules and Gothic minuscules, wordplay, and punctuations. The specific knowledge provided by the study is profound, but the reader ought to be aware of this accent when tackling the book.

To a larger degree than the first two parts, the third part is based on case studies, for which the author, despite the heterogeneity of the material, proposes a contextual cohesion. In accordance, she observes that the decoration of the vessels was linked to their content as well as to the pharmaceutical working praxis. At the same time, it becomes apparent that it is the images that pose the greatest difficulties for reliable present-day interpretation. One exception is a 16th century bottle from Abruzzo which illustrates a metaphorical understanding: the bread given to a dog emblematises, on the one hand, the so-called "bread of the dog" (217-8) made with barley, and on the other hand, represents the distillate resulting from it and administered to patients. And yet, only few of these examples are known. On other vessels, pathological faces were applied, presumably to visualise the conditions which the content was thought to cure. The author, however, also puts forward the intriguing interpretation that the physiognomies served as a visual system to facilitate mnemonic arrangement of the vessels in the apothecary's cupboard. Difficulties arise, though, in the book's identification of a number of plants depicted in a simplified manner on the vessels [3], whereas other identifications are quite plausible (e.g. rowan, figure 161; betony, figure 166; etc.), making the observation that schematic illustrations of herbs were recognizable for users a remarkable one indeed. The latter insight may aid explanations of the functioning of some old herbals as well as of the recognition value of the stylised image material they contain. [4]

On a critical note, the lack of care on part of the editors with respect to the image material is unfortunate: several illustrations were confused (e.g. figure 218 and 219; page 20, table 20 refers to 19); for some others the image legends are incorrect or incomplete (e.g. the frontispiece of Gart der Gesundheit, figure 213, should provide the first edition's date, Augsburg 1486, not 1488. Figure 214 is correctly captioned "Hortus sanitatis", which is referenced in the body text; however the legend mentions Hieronymus Brunschwig, Liber de arte distillandi). The book, constituting the most complete synthesis on apothecary's vessels of the period mentioned, remains highly recommendable not only because of the richness of material and the closeness to original sources, but also because it opens new perspectives for future research endeavours.

[3] The author received counsel from the botanist Daniel Alexandre. While I do not wish fundamentally to question the attributions, they do in some cases seem doubtful, e.g. the ground-ivy leaf, which is not in fact three-lobed (fig. 158); the black pepper leaves (fig. 159), being heart-shaped rather than oblong, at least cannot refer to Piper nigrum; the Judas-tree leaves (fig. 172). More exact specifications of features allowing identification would have been helpful and might have resulted in more plausibility.