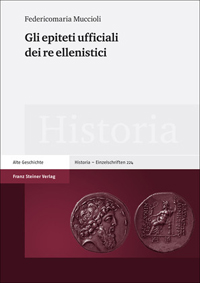 Muccioli has written a book that will become a standard reference for anyone working on Hellenistic kingship, ideology and ruler cult. Despite its length and fairly comprehensive nature, a deliberate choice has been made to exclude female rulers and epithets from the work. This leaves a substantial gap that will need to be filled by future work in the area. The book is divided into three parts: the first examines the development of epithets beginning with Alexander; the second examines individual epithets grouped according to their meanings; the final section discusses the spread and significance of these royal epithets in a broader context. There are two indexes, the first examines the problems around the usage of the epithets Megas, Basileus Megas and Basileus Basileon and the second looks specifically at the term Autokrator. There are also useful chronological tables of the kings of a large range of dynasties. However, given the focus of the work it is somewhat surprising that the epithets for each ruler are not listed in the chronological table, as this would provide a useful resource. Nonetheless, the excellent index makes looking for epithets connected with an individual king straightforward.

One of the most difficult problems in understanding the transmission of epithets between kings and between dynasties is discerning the wide variety of ways in which an epithet could recall a range of different associations. This is demonstrated clearly by the careful analysis of the title megas and Basileus Megas. The title is used by a wide variety of kings: Ptolemy II, III, V, and VIII; Antiochos III, IV, VII, and IX; Timarchos; Mithridates. Muccioli's careful analysis of the use of the title requires us to rethink some of the traditional perceptions about the title.

The term is often connected with the Achaemenid empire, but is also equally connected with Alexander. This has traditionally led to scholars (from Polybios onwards) connecting the assumption of the title with control over the East. As Muccioli demonstrates, this does not always work well for the Ptolemaic kings (Ptolemy III's attempts on Babylon notwithstanding) and it is more problematic than often considered even for Antiochos III. As he demonstrates, the lack of other Achaemenid elements in what we know of Antiochos' self-aggrandisement suggests that other factors need to have contributed to his use of the title. In the case of Antiochos III, we should look back to his deliberate imitation of the founder of the dynasty and his claim as a protector of the Greeks against Roman intervention.

The problematic nature of our understanding of these official titles is perhaps best viewed when setting Antiochos against Timarchos. Timarchos' adoption of the title Basileus Megas seems to be derived from his control over the regions of Babylonia and Media, although his anti-Seleukid stance may have had some influence. Here, as throughout the work, Muccioli's careful picking apart of the nuances surrounding each epithet should be praised.

The volume opens with a clear methodological introduction which provides a useful framework for understanding the difficulties in defining the place of epithets within Hellenistic titulature and culture. There is a careful analysis of the broad array of source material from which epithets can be derived, with particularly useful discussions on the nuances of those derived exclusively from literary sources.

The first chapter examines the term aniketos and its relationship to Alexander's cult. Here Muccioli presents a clear picture of the development of the titles during the reigns of Philip II and Alexander. Here in particular, the evidence for women such as Olympias (well analysed in a variety of publications by Carney) would be particularly helpful for seeing a broad picture.

The second chapter examines the Diadochoi: Antipatros; Cassander; Antigonos; Demetrios and Lysimachos are analysed as a group. Here the rejection of titles was as significant a political move as their adoption with Demetrios serving as the notable exception to the rejection or limitation of titles. The rest of the chapter looks at the development of royal titulature for Ptolemy and Seleukos respectively.

The third chapter follows the developments of the use of official epithets after the foundation of the dynasties. Perhaps the most significant contribution of this chapter is the analysis of the titles used by the non-Greek dynasts in this period, but more work remains to be done in this area.

What will become for many the most important feature of the book, the careful analysis of individual epithets begins in chapter four. The first chapter of this section looks at political epithets.

Those epithets which express the dedication of the king to a certain cause or individual are discussed in the next two chapters. First, those which connect the king with his own family are analysed. Usefully, the exploration of these titles is not limited to the Lagid dynasty where they most commonly occur. In fact, the analysis of the use of Philadelphos outside the Ptolemaic house is particularly interesting given the overwhelming association of the epithet in modern scholarship with the Ptolemy II. The next chapter moves outside the household and looks at those epithets which tie the king to a particular cause, group, or person (Philhellene, Philopatris, Philorhomaios, etc.).

The final two chapters (seven and eight) of this section look at the divine epithets and military epithets. The longest section deals with those epithets relating to the appearance of the king as a god: theos, epiphanes and theos epiphanes. Muccioli argues convincingly that theos and theos epiphanes should be viewed as a singular concept. Here, the shift in the Ptolemaic house from the use of the term for deceased kings to those living is again analysed, for the most part following Hazzard's argument. [1] For the Seleucid use of these epithets, more could be said on Antiochos II.

Nevertheless, the longest part of this section provides a useful rejection of the simplistic interpretation of the Antiochos IV's adoption of both titles (the chronological development of the titles on his coinage could be more clearly brought into the discussion). Rather than arguing for a single driving factor (or association with an individual god), Muccioli presents an array of possible influences on the choice of this title by Antiochos.

The final section of the book, chapter nine, provides an interpretative framework in which to analyse the use of these titles.

Overall, this book will become a key reference for any future research into the ideology of Hellenistic kingship. The monumental task of collecting the wide variety of epithets for each king would have been sufficiently valuable, but the clearly developed framework will provide useful comparative frameworks to emerge.