Brian Rutishauser: Athens and the Cyclades 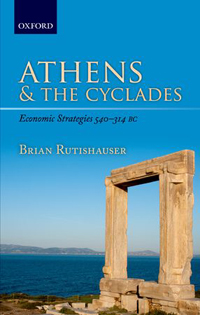 Rutishauser's valuable monograph was originally inspired by Russell Meiggs' apparently contradictory statement that the Cyclades were scarce in resources and yet natural prizes for states able to exert naval power (1), and questions of power and resources are central to this fascinating study of the influence of political and military events on the changing economic status of the Cycladic islands over the late sixth, fifth and fourth centuries BCE.

Recent studies of the Aegean and its individual islands, as well as the development of scholarly thinking about regionalism, insularity and networks have all changed the way we understand relations between island polities, but no scholar has previously studied the Cycladic economies in the context of Athenian and other hegemonies. Rutishauser responds to one-dimensional views of the region which have regarded hegemony as a suppressor of Cycladic prosperity (3-5) and shows that a more complex analysis is required, taking into account the islands' differing resources, competition between them and the importance of peer polity interaction as a motivator of economic expansion.

After an overview of the scholarly and theoretical landscape in chapter one, chapter two considers the region, its population, topography and ancient sources. The Cyclades tend to appear in surviving narratives as a stopover as their leading characters head to engagements elsewhere, but even these fleeting references yield information about trade routes and alliances. Taking them with a full consideration of archaeology, coinage and epigraphy both on the islands and in Athens, Rutishauser is able to construct a coherent picture of regional influences and economic activity.

Even in antiquity there was not unanimity as to which islands constituted the Cyclades and with careful justification, fifteen are identified for this study (21-29): Amorgos, Andros, Ios, Keos, Karthaia, Koressos, Ioulis, Poiessa, Kythnos, Naxos, Paros, Seriphos, Siphnos, Syros and Tenos. Because of its unique sacred function and relationship with Athens, Delos is not included although its plentiful epigraphic evidence is considered throughout.

Chapter three begins in the mid-sixth century with the emergence of evidence for the exploitation of Cycladic mineral resources and jostling for regional thalassocracy. Rutishauser demonstrates the way that peer polity interaction stimulated economic growth, with the acquisition of triremes by Naxos, trade in Parian and Naxian marble and emery, and temple-building on Paros, Naxos, Siphnos and Keos. Further afield Rutishauser suggests that Paros may have taken advantage of her ties to Thasos with its silver-rich mainland peraia, and that Naxos and other islands probably needed good relationships with timber-producing Thrace and Macedon in order to maintain their fleets. Inter-island trade with Siphnos is also likely to have provided silver bullion and the later sixth century saw the start of minting by Paros, Naxos, Siphnos, Seriphos, Karthaia, Koressos and Ioulis. External interest in the islands is seen both in the Spartan imposition of an oligarchy on Naxos in c. 514, and the availability of support to those oligarchs from the Persian satrap Artaphernes after their expulsion by democrats in 505.

In the absence of Cycladic evidence, Rutishauser draws a comparison with Kerkyra to show the extent to which the islands could have exploited their position on passing trade routes (66-71), and throughout the study their strategic situation on the approach to Piraeus and on the route between Egypt and the east is an essential aspect of his case that they had the ability to maintain their economies regardless of the wider political environment.

Chapter four discusses the ways in which the Persian Wars and the establishment of the Delian League changed that environment. The more eastern Cyclades (Andros, Paros, Naxos and Tenos) had medised, and Rutishauser argues that this affected their relations with Athens for several decades. Naxos suffered the first instance of forcible subjugation by Athens (89-91) and cleruchies were established on Naxos and Andros around 450, perhaps in response to further insurrection, although Rutishauser is rightly wary of any tendency to see all events during archē as result of revolt followed by suppression (99-100).

Mid fifth-century evidence is sparse, but there is no evidence that Athens appropriated island mineral resources. Cycladic tribute payments were at levels that do not indicate poverty (92-100) and Rutishauser argues that regional security and wider economic integration with Athens would have enabled a growth in commerce. By the end of the fifth century the islands had stopped minting, most no longer kept warships, and islanders instead served the Delian League as hoplites and rowers (138). But the islands maintained their individual political character and there were revolts after the Sicilian disaster. Men from Andros and Tenos supported the Four Hundred in Athens and Rutishauser suggests that the forces may have held mixed motives: hoplite desire for the end of archē and anger at the loss of compatriots in Sicily, alongside aristocratic resentment of phoros (126-135).

Following the collapse of Athenian hegemony we know little about the nature of Spartan control, but Athenian archē with its naval dominance had been a restraint on piracy, and Piraeus now offered a temporarily less buoyant market (143-147). In the absence of Athens' universally trusted coinage, Siphnos and Naxos began to mint once more (150-153). The effects of the King's Peace in 387 are also uncertain, and although Isocrates (4.132-6) indicates that Athens and Persia fought over the region, Athenian commercial traffic increased (153-156). By 377 Athens had sufficient allies to establish the Second Athenian League, and Rutishauser provides a thoughtful discussion of the questions surrounding the accession of the islands and the League's Prospectus (RO 22), which lists many of the Cyclades but not Naxos (158-167).

As Athens recovered from the Social War and Philip II exercised increasing influence, the Aegean saw naval engagements off Siphnos and Amorgos, but neither Athens nor Macedon appear to have garrisoned the islands (201-207). Despite the constantly shifting balance of power in the Aegean through the fourth century, the indications are that the islands adapted well, and the economic policies of Eubulus and Lykourgos enabled them to share in Athenian prosperity, creating what Rutishauser describes as 'a (nearly) perfect symbiosis'.

This detailed and thought-provoking study is significant in several fields, not least, for its meticulous gathering and analysis of the disparate evidence of the islands, for its detailed reconstruction of Cycladic local and inter-state political relationships, and most importantly, for its engagement with the effects of hegemony on the economies of member states. Rutishauser reminds us that it is possible and necessary to consider the more powerful states from the vantage point of those which have left less plentiful evidence, and that such a lack of evidence need not imply a lack of resourcefulness. It argues above all that whilst absence of archē was once viewed by scholars as the only regime under which the islands could truly prosper, in practice the Cyclades came not only to expect hegemony, but to thrive under it.