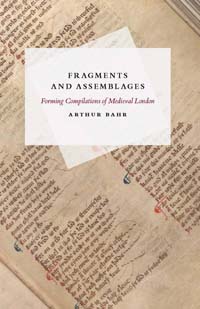 This important book explores medieval history, literature, law, and culture through a codicological lens. Each of the four chapters offers a close study of a fourteenth-century English "assemblage": the corpus of Andrew Horn, the Auchinleck manuscript, Geoffrey Chaucer's Canterbury Tales (CT), and the Trentham manuscript of John Gower. In the Introduction Bahr proposes that "we can productively bring comparable interpretive strategies to bear on the formal characteristics of both physical manuscripts and literary works" (1).

This approach includes not only traditional manuscript study but also recent physical or editorial dispersal of manuscripts; so for example the Horn Corpus is now in multiple manuscripts and libraries. Editorially, Gower's trilingual collection, with its seven chiastically arranged works, has been divided among three collections defined linguistically, with a consequent loss to the conversation among those works in their original context. Thus Bahr's codicological insights reach beyond the fourteenth century into modern editorial and translational practice.

Another major concern is historical: the bearing of these particular four assemblages on fourteenth-century London, with literary interpretation both a subject and a means of exploration. The book's introduction and first chapter provide extensive historical context, with the remaining chapters relying on readers' familiarity with that material.

One important theme set out in the chapter on the Horn corpus is imminent danger to the liberties of the citizens of London. Bahr shows Horn's works as providing historical evidence of citizens' rights and reminders about royal threats to those rights. Literary interpretation is important in this discussion, as Horn's concerns are highlighted by reading his works in manuscript order and in relationship to one another; codicological clues like the marginal poem on the first folio of his Mirror of Justices signal the need for close textual attention. Material on the popularity of literary contests among merchants in fourteenth-century London indicates how carefully they would have read such works.

Several interwoven sub-themes illuminate the book's central argument. In the case of the Horn corpus, Bahr focuses on counterfactualism, the way in which the placement of substantively parallel texts such as Anglo-Saxon legal texts and early medieval documents next to contemporary works offers contrasting evidence about London past and present, so allowing a satirical take on contemporary works and conditions. One striking instance is Horn's encomium to London as a city of the world, juxtaposed with the disruptive effect of massive immigration into fourteenth-century London (81-82).

Chapter two concentrates on "imitative fantasy" in Booklet 3 of the Auchinleck manuscript, containing texts that structurally mirror those in the manuscript as a whole, moving from homily through romance and ending with political or historical texts. The initial works explicitly encourage imitation of saintly protagonists; the following romance and historical narratives tacitly offer the same invitation.

Booklet 3 culminates, however, with an enigma - an unlabeled "arresting wall of names" (140) of three and a half pages, now known as the Battle Abbey Roll. Bahr treats this as the most revealing of the works in the booklet, partly precisely because of its "total lack of both narrative and context" (140). He speculates that the Battle Abbey Roll invites readers to infer its meaning, following the imitative model of the preceding works. This documentary invitation relies on readers' recognizing the list's counterfactual content, with its incomplete catalogue of those who fought in the Battle of Hastings combined with others who were not actually in that company. Bahr argues that the list's tacit expansion of the historical record "demonstrates that history is not static" (146) and, that, by interweaving names of revered historical figures with others more recent, it "encourages Auchinleck's audience to imagine themselves part of that company" (147).

This discussion, which appears near the center of Bahr's book, is substantively central to the idea that the four assemblages all offer non-aristocratic readers with social aspirations the chance to recognize themselves in what they read. Just as the works in Booklet 3 imply that readers might through imitation improve their status, Bahr suggests that all four assemblages invite merchant readers to see the contrast between what is and what might be and so to consider that they might similarly advance socially.

Chapter 3 deals with the CT. As Bahr explains, "in critical discourse [...] it is a poem of fragments whose conventional capitalization (e.g., Fragment I or VII) implies a secure, stable integrity at odds with the meaning of the word fragment itself" (157). This work is an assemblage of tales in different voices, with an overarching narrative that is apparently incomplete and with its many manuscripts disagreeing in their ordering of the different Fragments. Some of the tales are themselves incomplete, with certain speakers simply trailing off and others interrupted. Further, the general narrator himself invites his audience to skip around within the collection of tales.

In this chapter Bahr develops "compilational construction as a form of literary interpretation" (162), showing how the apparently undetermined form of the CT invites readers to create their own narrative from the materials provided, with their potpourri of relationships and meanings again offering London burghers hope of improving their status. Bahr focuses here on one portion of the whole, Fragment 1, which moves from the Knight's lengthy aristocratic tale to the London Cook's truncated one. Bahr's explication of this Fragment embodies his larger concerns of counterfactualism, imitative fantasy, and social movement.

Bahr cites two of the most important CT manuscripts, the Hengwrt and Ellesmere, with their differing arrangement of Fragments and tales to demonstrate that since at least the early fifteenth century readers have responded to Chaucer's invitation to make their own adventure. He also notes regarding the 1986 Riverside edition of the CT that as such editions themselves become canonical, their form influences readers' interpretation of the works they contain.

The final chapter in the developing argument concerns Gower's Trentham manuscript, which raises particular interpretive questions, beginning with that of its purpose. As most of its seven works deal with kingship, and five either address or praise Henry IV, crowned in 1367, the implication is that Gower intended the collection to honor Henry, to acclaim the promised successes and generosity of his reign. The later works, however, recall the "royal misbehavior" (214) of previous kings, including Richard II, so subverting that message. Although the early works in the manuscript have led many to believe it intended for Henry, the later works, generically mirroring the early ones, implicitly satirize that view, problematizing views of the collection as an uncritical Henrican celebration.

In the Afterword Bahr returns to the nature of such assemblages as "collections of disparate textual pieces into a larger whole", whose arrangement "invites readers metaphorically to assemble [...] some broader set of meanings or perspectives that would not be legible if these pieces were read in isolation" (255). He also draws an obvious inference from this statement: any such set of meanings will be subjective. This inference makes the Afterword particularly valuable to scholars in its pointing beyond the fourteenth-century urban and mercantile landscape to the development of new "interpretive modes" (255) in manuscript studies, beyond the "conclusively historical" (256). This idea, undergirded with recollection of the joys of "active, restless, creative forms of reading" experienced by "London's merchant elite in the fourteenth century" (257), essentially concludes the book. So Bahr, in his own active engagement with the works he explicates, invites readers to join him in similar ways of reading and in a shared delight in textual interpretation, whether literary, codicological, or historical.

Appropriately in a book concerned with the intersection of form and meaning, several photographs illustrate significant codicological elements, including the marginal poem in the Horn corpus and the four leaves of the Battle Abbey Roll in the Auchinleck. There are also many footnotes, a strong bibliography, and an extensive index.

This is a book that deserves and rewards reading and rereading. It is gracefully and tightly written and constructed, elegantly conceived and illustrated, and above all intellectually provocative.