Marek Wecowski: The Rise of the Greek Aristocratic Banquet 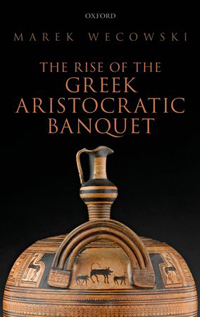 As a topic of investigation, the symposion crystalizes a methodological conundrum faced by all ancient historians, namely how to establish coherent understanding of a phenomenon from the distant past for which evidence is disparate in time and type. The activity of drinking is attested by vessels found in assemblages from Bronze Age Greece onwards, whilst drinking together is represented across the range of Archaic and Classical texts, from epic poetry to lawcourt orations. Like contemporary paintings on ceramic pots and public sculpture, they depict condensed moments of sympotic activity. Extended dramatizations appear only towards the end of this period, and particularly in a philosophical mode. Any attempt to understand the symposion as a social and political phenomenon with distinctive characteristics, to articulate its origins and chart its history, must grapple with this complex patterning of evidence.

With its long-term, retrospective approach, The Rise of the Greek Aristocratic Banquet by Marek Wecowski demonstrates one possible response. Armed with the notion of Max Weber's "ideal type", the author searches for essential features of the symposion across written and visual material from the late Archaic to Imperial periods. These elements are then traced backwards into earlier archaeology and poetry, and finally the origins of the symposion, newly defined, are located within the emerging polis culture of the Geometric period. Observations on the socio-political dynamics are reinforced through comparison with contemporary anthropological models of commensality. With its ethos of exclusive equality and controlled competition, Wecowski's symposion is akin to Dietler's "diacritical feast" and, with modifications, Grignon's "segregative commensality". In form and function, the symposion contributes to the emergence of élites within wider communities, in part by developing an ethos. The rise of the symposion and the polis are concomitant.

Wecowski pursues this hypothesis with erudition and imagination. In the opening attempt to define the symposion beyond the initial "culture-oriented drinking occasion for Greek élites" (11), the argument flows from the practicalities of the drinking party to the social dynamics underpinning élite participation to advance an egalitarian ideology grounded in action (Chapters 1 and 2). Competitive game-play and the circulation of cups and conversation to the right are given special emphasis: contained competition enables symposiasts to establish their position within the peer group, while the organizing principle of epidexia acts as a delineating marker of equivalency and fellowship against which non-normative hierarchical or isolated drinking (anti-symposia) and non-sympotic activities can be set.

With these hallmarks aduced, Wecowski proceeds to identify the symposion through the material and poetic culture of early Archaic Greece. The inscribed promise on the Cup of Nestor that its drinker will enjoy the delights of Aphrodite attests to a playfully competitive environment featuring Homeric allusions, poetry, and eroticism (Chapter 3). Here already at Pithekoussai in the late 8th C is the Greek symposion. Speculation about Near Eastern origins - a proposition arising erroneously from the conflation of Greek and Syro-Phoenician practices due to an over-emphasis on reclining (defended here as a late 7th C introduction) and under-appreciation of differences (especially in the form and function of the Hebrew marzeah) - is entirely unnecessary. Some distinctive religious, public, and domestic buildings at sites contemporary with Nestor's cup also make élite dining at this time a possibility.

Homeric epic adds further evidence (Chapter 4). Focusing on referential description in the Iliad and Odyssey, Wecowski demonstrates their poets' familiarity with sympotic culture. This is visible not in episodes of normative heroic feasts - hierarchical events that promote community between guests and their host -, but in descriptions that point to the world of the audience ("non-traditional referentiality"). For example, the torches described as shining light on night-time diners are never called to serve this function in the poem: but the passing description assumes the possibility of feasting by night (as at the symposion). And although cups never circulate epidexia, the wine-pouring Hephaestus and begging Odysseus both adopt this pattern of movement, and indeed the bow-stringing competition proceeds in this fashion "beginning from where the wine is served out" (Od. 22.142, cited at 223). Although Homeric heroes may not have been au fait with the symposion, the audience of Homeric poetry was. It is telling, Wecowski suggests, that the one party that conforms to a model of equality amongst guests and competition is the feasting of the suitors, whose transgressions are therefore intimated by sympotic conduct.

This sophisticated reading pushes the origins of the symposion, as it is now understood, back before the composition of the Homeric poems. Chapter 5 takes it a step further, by hypothesising meanings and usages for assemblages of drinking ware found in Protogeometric and Geometric burials. The working premise is that certain groupings might connote a socially meaningful style of wine-drinking; hence, through the deposition of "drinking sets", individuals could express aspects of their lifestyle and identity. Pictorial allusions to aristocratic lifestyles (hunting, eroticism) on a pottery drinking vessel from a rich Euboean grave point towards the interests expressed on the later Cup of Nestor as do scenes on Attic grave goods, all from the early 8th C. At Athens, however, vessels are more widely spread; and shapes extend from extravagant display pieces to easy-to pass kantharoi. Members of Athens' élite are not conveying their status through objects associated with "Homeric feasting" (meat-eating), but communal drinking. Increases in the capacity and prominence of cups in Cretan graves - cups that might have acted as mini-kraters - may also attest to "sympotic" activity at this crucial time. By conclusion (Chapter 6), the "diacritical feast" emerges in tandem with the polis as a distinguishing activity of newly expanding élites, integrating upwardly mobile kakoi ("inferiors") into the previously narrower ruling group of aristoi ("superiors") and setting the resulting group apart. The Homeric positioning of the symposion against heroic feasting (noted above) might be viewed as a protest against this development.

This crowning depiction of the symposion is somewhat familiar: an egalitarian event that negotiates shifts in wealth and status within the archaic polis, whilst also delineating boundaries. The main achievement of Wecowski's teleological study, therefore, is to project this event back into the early 8th C and make it indigenous. Whether this appears convincing depends on how far one accepts the underlying methodology. At the beginning of the Conclusion, the author wards off possible criticism: "In the humanities and social sciences, the results of our inquiries often match what we were looking for from the outset. And although this is typical of the hermeneutic circle, it need not undermine our conclusions." (303). Circularity is then pre-emptively defended by recourse to the potential offered by creating an "ideal type". However, Weber's use of ideal types to sketch essential elements of public institutions has long been criticized. First, the selection process pretends to an objectivity that is unsustainable from modern theoretical positions, and secondly, the chosen elements are given priority over the people who make up the institution (F. Parkin, Max Weber, 1982: 30-36). When applied to The Rise of the Greek Aristocratic Banquet, these observations complicate its methodological approach.

First, in creating an "ideal type", particular features of the ancient Greek drinking party are prioritized at the expense of others. Wecowski is able to find the symposion in the 8th C because he rejects reclining as a tracer element. In its place, the circulation of cups epidexia is established alongside the more standard characteristics of eroticism and the pursuit of pleasure. Earlier evidence can then be read through the prism of the newly defined symposion. Looking back further, so long as one element can be hypothetically inferred, the symposion can be said to exist. Thus, the initial selection is a loaded manoeuvre. This circularity is certainly productive, but it is not clear why the problematic underlying it should so easily be dismissed.

Secondly, the priority afforded to allegedly "original" features elides the importance of de-selected features in defining or giving meaning to the symposion for participants. To pick up the issue of reclining, whatever its roots, the habit of reclining on couches and cushions would have shaped the experience of symposiasts from at least the 7th C onwards. At a physical level, reclining informs how members of a group interact as a group. In addition, reclining on couches and cushions could have plugged Greek symposiasts into a chain of iconography and cultural association stretching to the luxurious Near East. Reclining is not a neutral activity, but one that might contribute to the very processes of integration and separation Wecowski outlines, depending on horizons and attitudes of individual participants. Disqualifying reclining as a defining feature of the symposion ignores its constructive effects, and the possibility that it changes or enhances what the symposion is or does for its participants. The point is not that reclining must be included in a definition, but rather that the act of searching for a definition implies a more stable, monolithic phenomenon than likely ever existed.

In sum, The Rise of the Greek Aristocratic Banquet offers a rich and thought-provoking study that raises questions about the very definition of the symposion. The closing chapter usefully emphasises the interconnectivity between cultural behaviours that might otherwise be regarded separately as "social" and "political". Greek commensality was embedded commensality; the symposion is one expression of this. Recognizing malleability and flexibility in communal drinking, that is to say the diversity in what the symposion might be, would set the symposion as it is imagined in The Rise of the Aristocratic Greek Banquet into wider patterns of sociability and political relations in Archaic and Classical Greece.