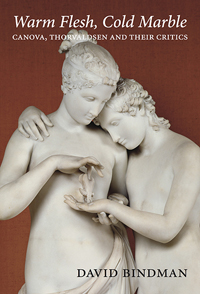 In this timely study David Bindman reconstructs the fascinating episode of the inception of the rivalry between two of the most prominent neoclassical sculptors - the Italian Canova and the Dane, Thorvaldsen, while both were working in Rome circa 1800. His exploration of their works and critical reception provides new contexts and perspectives for understanding these artists. In his introduction, "A Debate in Marble", and a series of five chapters divided under the broad rubrics of "Sculpture in Practice: Gods and Heroes, Men and Women" and "Sculpture in Theory: The 'Philosophic' Critics", Bindman explores ways in which these major sculptors came to be defined as rivals and how their friends, patrons, biographers and apologists as well as theorists of classical beauty helped to create a narrative of ideological and aesthetic difference that prevails even today.

Bindman considers the impact, direct and indirect, of the writings of "philosophical" aestheticians and critics on the evolving styles of Canova and Thorvaldsen. He focuses specifically on their commissioned mythological works that share common subjects and which were begun while they lived and worked in Rome circa 1800, a period when they knew one another and had opportunities for artistic and personal interaction. Because this was a period of renewed mythological discourse and reinterpretation, evinced in the copious writings on myth as well as the concomitant re-imaginings of mythology in the realm of the visual arts, it is not surprising that both Canova and Thorvaldsen received numerous commissions for mythological subjects. Many of their works engage similar mythic themes but the style and interpretation diverge in fascinating ways. Bindman analyzes works created by the sculptors that are akin in subject as the most direct means to discern their principal differences in style and interpretation. He skillfully interweaves his analyses with interpretations offered by contemporaneous biographers and art writers who addressed principally the contributions of Canova, including Quatremère de Quincy (who saw in Canova the true heir of ancient art), Cicognara (Canova's principal biographer), Missirini (another great supporter of Canova), and Carl Ludwig Fernow (who understood the two artists to be in dialogue with one another). Although Thorvaldsen was the subject of less critical attention he was nonetheless seen as Canova's principal rival in terms of the "debate in marble" that Bindman construes. Bindman situates the works and their reception within the broader context of aesthetic ideas promulgated by Winckelmann, Herder, and Schiller, among others. He begins and ends his book with a consideration of the potential influence of Kantian aesthetics on sculptural theory and practice (however indirect it may have been) as a means of understanding the reception of Canova and Thorvaldsen. He explores in particular what he characterizes as a "vulgar Kantianism", a widespread dissemination of Kant's ideas which permeated many levels of culture often in diluted and perhaps degraded form, especially those concerning human and aesthetic autonomy as well as that of aesthetic judgment.

Bindman examines the ways in which art writers who were concerned with neoclassical theories of beauty and who embraced ancient sculpture as a model for the moderns, such as Quatremère de Quincy, Cicognara, and Fernow, led to the characterization of Canova and Thorvaldsen as rivals and even as distinct and polar opposites on personal as well as artistic levels. Thus Canova, the international diplomat, creates mythological works known for sensual surfaces, feminine beauty, grace, and eroticism in accord with "French taste" while Thorvaldsen is seen as introverted and brooding, the creator of mythological sculptures that are masculine, spiritual, simple, solemn and severe. Canova receives mythological commissions from Italian and French patrons (including Napoleon, Josephine and the Bonaparte family) while Thorvaldsen attracts German patrons, most prominently Ludwig of Bavaria. Writers of the period also cast the two in terms of the polarities of the cultures of northern and southern Europe, and for them nationalism and politics play a role in explaining the differences between the two sculptors. In addition, Canova is enraptured by the Parthenon marbles brought by Elgin to Britain which in their beauty, grace, and naturalism give an imprimatur to his aesthetic choices. Canova, in accord with Quatremère de Quincy, did not believe ancient sculpture should undergo modern restoration. Thorvaldsen accepts Ludwig of Bavaria's invitation to restore the Aegina marbles from the Temple of Aphaia which embody the Archaic style. Canova, therefore, is associated with the high classical style of Phidas while Thorvaldsen is influenced by the rigid, severe, and more abstract archaic style from the classical past. According to this narrative construed by the critics and observers of the period, the divergence in their sources of influence and inspiration led the artists to choose differing styles and meanings in their interpretations of mythological subjects.

Throughout the book Bindman emphasizes the important differences in prevailing ideals and conventions of beauty to which Canova and Thorvaldsen adhere, evidence of the complexity of the neoclassical revival in art which encompassed numerous directions. Color in sculpture, for example, was a major issue of the period and constitutes yet another point of divergence for the artists. Thorvaldsen refused the use of color in sculpture, Canova embraced it. Bindman devotes a chapter to the color of sculpture and relates the ideals of whiteness in marble to emergent late eighteenth-century theories of race in Europe. Canova's advocate and mentor, Quatremère de Quincy, supported color in sculpture, a recently rediscovered feature of ancient sculpture during this period. Canova was known to wax and tint the soft, sensual surfaces of his marbles, an effect that gave them greater naturalism (one that has disappeared with continual cleanings). He also used polychromy in certain works, such as gilded metal in the attributes of his famous statues of Hebe from the early nineteenth century, works discussed in great detail by Bindman.

Bindman analyzes selected mythological works by Canova and Thorvaldsen that reveal the notable differences between these artists. Where Canova typically chooses mythic narrative expressed in the soft, sensual style, Thorvaldsen favors abstraction and allegory in style and meaning. Bindman contrasts their differing interpretations of some of the most popular mythic subjects of the period - Cupid and Psyche, Hebe, Venus, and the Three Graces. In addition, he contrasts Canova's Perseus and his Paris with Thorvaldsen's Jason and the Adonis, respectively. His analyses reveal that the artists were aware of one another's works and, he contends, often in dialogue with one another. He also explores the choice of subjects, part of the negotiations between patron and sculptor, as well as several of the multiple interpretations of mythology during this period that we see realized in these statues. The beautiful and lavish illustrations (almost all 61 illustrations are in color) are a welcome accompaniment to his analyses.

This book makes an important contribution to our understanding of European sculpture of the late eighteenth and early nineteenth-centuries, a period characterized by an international "statuomania", and can serve as a gateway to exploring further the complexities and multi-faceted dimensions of sculpture produced throughout Europe during this period.