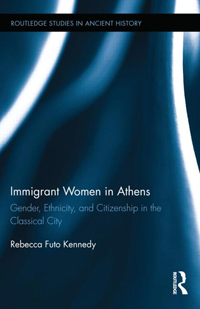 Metic women form a group that has often been ignored by modern scholars. Being either dismissed as non-influential or assimilated to prostitutes, it seems that these women were invisible in both ancient Athens and in modern scholarship. Enter Rebecca Futo Kennedy. She argues in her short but elegantly written study that metic women were not as minor of a group as previously believed and that they have made extensive contributions to Athenian history: according to her, 'metic women played a role at almost every social and economic level of the polis' (1). She aims to explore the lives of these women in her study and to nuance both ancient and modern prejudices against them.

Chapter One examines the effects of Athenian legislation on the life of metic women, from the birth of metoikia to the Periklean Citizenship Law of 451, its amendment during the Peloponnesian War, its reinstatement in 403 and finally the ban of metic-citizen marriage somewhere between 390 and 371 BCE. Kennedy argues that prejudices concerning metic women were born as a consequence of the Citizenship Law and that these women were excluded from the citizen body. It is a shame that a study by Sara Wijma, which focuses on the integration of metics into the Athenian polis through cult participation, is missing in Kennedy's bibliography. Wijma shows convincingly that, after the Citizenship Law had put the cohesion of the polis under stress, the incorporation of metics into polis religion conceptualized metics and Athenians as a homogenous worshipping community. [1]

In Chapter Two, Kennedy describes the ideology of the metic woman in the fifth century, using primarily tragedies to reconstruct the (changes in) status of and attitude towards metic women. According to her, in plays from the first half of the fifth century, it seems that metic women are a threat to the city but are eventually incorporated. She interprets plays dated after the Citizenship Law, however, as portraying the same metic women as a group that should be excluded, eliminated or demonized.

Chapter Three, then, focuses on the definition of hetaira and examines the life of Aspasia, wife of Perikles. Rejecting the definition of the hetaira as a high class escort girl or prostitute, Kennedy believes that hetairai were in fact elite (and sometimes foreign) aristocratic women who participated in sympotic and luxury culture as female friends, not 'companions'. She argues that the term only acquired its negative connotations over the course of the fifth century, where the term starts to refer to metic or sometimes citizen women who were unable to marry or lived without a kurios. Even then, however, '[these women] may all have counted as 'whores' in a certain ideological matrix, but that did not make them actual prostitutes' (87). Not all may find her new definition of hetaira convincing. However, based on contemporary literary, epigraphical and iconographical sources, Kennedy shows that there are some problems with simply interpreting hetairai as 'entertainers' or prostitutes. By identifying these problems, Kennedy has opened the door to the re-examination and possible re-evaluation of this group of women.

The focus in Chapter Four lies on the daily activities and legal struggles of metic women in the fourth century. Kennedy argues that the precarious legal position of metic women, combined with negative stereotypes about them, made them easy targets to be slandered or dragged into court by citizen men looking to make a (sometimes political) profit. In one of the stronger sections of her study, Kennedy also argues against translation of the term pallakê as 'concubine'. She convincingly re-examines the concept of pallakia, which according to her seems to have been 'a contractual relationship between a citizen and a metic that carried with it some protections for the woman's rights and in which children might be an expected outcome' (115).

Finally, Chapter Five shows the everyday activities and occupations of metic women. In the introduction, Kennedy promises to discuss archaeological evidence like phialai inscriptions and tombstones and already gives us a taste, stating that many tombs of metic women show they were 'midwives, herbalists, nurses, priestesses of foreign cults, weavers, and shoemakers' (8). Kennedy does show through phialai inscriptions that weaving was a probable metic woman occupation. It is, however, disappointing to find that there is no epigraphic material whatsoever indicating that metic women served as priests and only one tombstone referring to a female midwife: it is unclear whether she is a citizen or a metic. In the phialai inscriptions, one single shoemaker and two nurses are mentioned. Kennedy defends the idea of metics-as-nurses by mentioning three tombstones, all of which might have belonged to slaves, not metics. As Kennedy states herself, 'our evidence is full of holes' (153). Fully agreeing with her on this, one wonders why she paints a different picture in her introduction.

There are some problems with the methodology of this study, two of which will be addressed: first of all, the evidence used in Chapter Two. Since the only literary sources we have on metic women in the fifth century are tragedies, they form a logical source for Kennedy to use in her research. While it is absolutely true that tragedies reflect not only on the mythical past but also, in some ways, on the time in which they were written, there are boundaries from what we can learn from them about subjects as specific as Kennedy's. Especially when there are no other sources to verify or compare any observations about metic women based on tragedies to, one should be very careful with drawing conclusions from such an uncertain source: any interpretation remains just that and for every classical tragedy, there are sure to be a dozen conflicting ones. In Kennedy's analysis, characters from various tragedies (such as the Danaids in Aeschylus' Suppliants or even the Furies in his Eumenides) are boiled down to a 'metic' identity because of their foreignness. By analyzing these characters, Kennedy tries to distill the general public opinion on metic women in fifth century Athens: their roles and actions in the plays are interpreted to be a symbolic representation of anxiety about metics. By over-analyzing tragic texts, taking every action and statement of mythical foreign women for some kind of a symbolic representation of fifth century reality, Kennedy seems to theorize more than the actual evidence can support. It should be noted that this criticism does not apply to her analysis of Antigone in Sophocles' tragedy of the same name. This text is vastly more explicit on the subject than the other tragedies: the term metoikos is actually used in the play metaphorically to show Antigone does not 'fit in' anymore and Kennedy rightly observes that the use of this phrase implies a state of limbo.

The second problem is the complete absence of metic men throughout the work. Kennedy justly points out that Whitehead ignored women in his famous study of metics. A problem in the methodology throughout her own study, however, is that although she focuses on metic women exactly because they deserve attention, she neglects to look at the differences between metic men and women. Men could just as easily have fallen victim to the Athenian emphasis on autochthony and their negative stereotypes towards 'outsiders', which Kennedy describes. Because there is no reference to what happens to metic men, it stays unclear whether restrictions and regulations, slander and public opinion against metic women are gender-based or not.

These weaknesses aside: in her criticisms of the standard definitions of the terms hetaira and pallakê, in making a clear distinction between metic women and their citizen counterparts, as well as in showing metic women had various occupations and cannot be assimilated with prostitutes as often has been done, this study forms an important contribution to the study of the classical Athenian society.

[1] S.M. Wijma: Joining the Athenian community: the participation of metics in Athenian polis religion in the fifth and fourth centruries B.C., Utrecht 2010, 309-316.