Ioanna Kralli: The Hellenistic Peloponnese. Interstate Relations. A Narrative and Analytic History, from the Fourth Century to 146 BC, Swansea: The Classical Press of Wales 2017 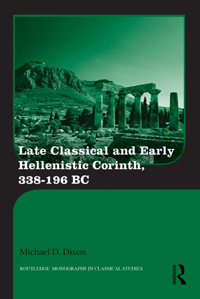 The death of the Greek polis at the end of the Classical period, once much exaggerated, has become something of a straw man in recent scholarship. Yet, as this volume by Michael Dixon shows, Hellenistic Corinth nonetheless represents an interesting test-case for the so-called 'vitalist paradigm' that has come to predominate, emphasising the continuing and, in some cases, increasing vitality of the Greek city states in this period. For few poleis is a contrast between Classical and Hellenistic more clearly apparent. Classical, 'wealthy' Corinth, dominating the strategically important Isthmus linking the Peloponnese to Mainland Greece with harbours on either side, occupied a position in the political history of the Classical period second only to Athens and Sparta. The Corinthians, indeed, are credited, by Thucydides, with playing the decisive role in bringing about the Peloponnesian War. Hellenistic Corinth, by contrast, has tended to be viewed in scholarship as important only as the host city for a foreign, Macedonian garrison, one of the famous 'fetters of Greece', in the phrase attributed to Philip V (Polybius 18.11). The task which the author sets himself in this book is to move beyond this narrative of domination which has, in Dixon's view, characterized earlier scholarship, to understand the position of Corinth in connection with the Macedonian kings in terms of the euergetical model of king-city relations outlined in particular by John Ma. [1] However, although Dixon has produced a lively and readable synthesis of our evidence for Corinth during the Hellenistic period down to 196 BC, his revisionist thesis of the relations between Corinth and the Antigonid kings is only partially successful.

Dixon begins his account in 338, at the point at which John Salmon concluded his classic monograph on Corinth. [2] In five substantive chapters, Dixon draws the available literary, archaeological and much of the limited epigraphic material together to construct a chronological narrative of the wider events in which Corinth and Corinthians were involved. Beginning with the foundation of the League of Corinth, Dixon discusses the vicissitudes of the Corinthians under Philip and Alexander (Chapter 2) and the Diadochoi (Chapter 3). Chapters 4, 6 and 7 represent the heart of the monograph, dealing with the history of the relationship between Corinth and the Antigonid kings, after the inheritance of Corinth by Antigonos Gonatas from his father Demetrius Poliorketes (Chapter 4), the secession of Corinth from the Antigonids and its fortunes within the Achaean League (Chapter 6), and the subsequent return of Corinth to Antigonid control, down to the defeat of Philip V by the Romans in 196 BC (Chapter 7). The chronological progression of the book is interrupted by Chapter 5, a discussion of the monuments of early Hellenistic Corinth.

One of the real strengths in this book is Dixon's sensitivity to Corinthian topography. This is evident, for example, in his lucid narrative of Aratos' liberation of the town from the Antignonid garrison under the unfortunate Persaios of Kition, and in his discussion of the likely location of the Antigonid palace - as yet unattested archaeologically - which, Dixon shows, was probably located on the northern slopes of Acrocorinth (128-30). Dixon's proposed identification of the so-called West Foundation at Isthmia as a heroon and its recipient as Demaratos, the prominent Corinthian friend of Philip and then Alexander, is also intriguing (114-5, cf. 27-9). As well as being plausible in its own terms, especially in view of the elaborate funerary honours which Alexander is said to have paid Demaratos himself on his death, the swift discontinuation of cult at this site, followed, in the early third century, by its destruction, would be a striking reflection of the way in which the focus swiftly shifted, for the Corinthians, from emphasising links with Alexander to constructing them with the Antigonid successors who followed.

There are also, however, a number of difficulties with this study and Dixon's approach to it, which he does not manage wholly to surmount. One is the difficulty, which Dixon shares with other historians working on particular poleis, of writing continuous political history from wider ranging sources that can offer only a very patchy and incomplete overview of local events. To make sense of his lacunose material, Dixon sometimes leans heavily on his interpretative model, despite having very little epigraphic material from Corinth to modify or correct it. This is problematic because, as Dixon himself acknowledges, the euergetical model he is working with is, in essence, a linguistic construct. The result is an account which is sometimes too narrowly focused - on the relationship between Corinth and Macedon, and on what the Macedonians did positively for the Corinthians (and, conversely, the hollow nature of the Achaean liberation of Corinth) - to always carry conviction. In Chapter 5, for example, Dixon examines a historical phenomenon of real interest, an impressive and expansive public building programme at Corinth and Isthmia which seems to have taken place during the late fourth and early third centuries BC. Dixon's focus, however, is on arguing, from highly circumstantial evidence, for Macedonian connections with particular buildings and frequently these connections cannot be convincingly made (as in the case of the Stele Shrine). It may well be case that the financing of this sort of programme would have required royal subventions, but substantiating this would require more of a discussion of the other possibilities, especially public funding, which is largely absent (as is a discussion of the function of the diolkos and the consequences of the emerging consensus that largescale transport of ships or cargoes across the Isthmus was a rarity). [3]

As a reader, I also felt the lack of a detailed discussion of the internal political structure and dynamics of Corinth during this period. Dixon concludes early, on the basis of an absence of a positive reference to constitutional change '[that] it seems probable [...] that post-Chaironeia Corinth represented a continuation of an oligarchic constitution that had long been a feature of Corinthian history' (21). But what does an 'oligarchic constitution' mean for a city which possessed an active assembly attested making decisions relating to interstate relations (including an asylia decree, which is well discussed in relation to Corinth's relations with Macedon (187-8), and two fragmentary honorific decrees)? [4] Dixon's brief discussion of stasis in the Corinthian demos at decisive moments in the history of the Hellenistic city (200) highlights the need to unpack this sort of ideologically charged terminology by using case studies to get a sense of what sort of internal Corinthian actors and dynamics were involved in, for example, relations between Corinth and the Antigonid kings.

A more thematic account of Hellenistic Corinth - modelled on the first, and arguably more successful half of Salmon's Wealthy Corinth - might have offered a better canvas for examining the historical questions which Corinth poses during this fascinating period, especially given the problematic nature of our source material. This volume is, however, a valuable addition to the bibliography on this important city state. It will be the first port of call for all those seeking a continuous account of the main events in the history of Hellenistic Corinth and provides an interpretation which will incite interest as well as some disagreement.

[3] David K. Pettegrew: The Diolkos of Corinth, in: AJA 115 (2011), no. 4, 549-574; Hans Lohmann: Der Diolkos von Korinth - eine antike Schiffsschleppe?, in: Wolf-Dietrich Niemeier / Konstantinos Kissas (eds.): The Corinthia and the Northeast Peloponnese. Topography and History from Prehistoric Times until the End of Antiquity, Munich 2013, 207-230.