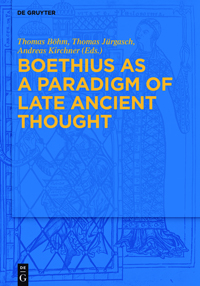 The title of this wide-ranging collection of essays on Boethius and his influence (four in German, six in English) gives the somewhat misleading impression that this is a unified monograph advancing a specific thesis. To appreciate the value of this book, you need to look at, and then look past, that title.

The International Center for Boethian Studies (ICBS) was founded in 2010 in Freiburg im Breisgau; one of its goals is to provide a critical edition of the entire Boethian corpus. As there are many excellent editions of the Consolation and the Tractates, it is the promise of a uniform, complete, and scholarly suite of editions of the logical works in particular that makes this such an exciting announcement, however long it may take to achieve. A case in point: the essay by Monika Asztalos, a prominent scholar with long experience of Boethius the logician, "Nomen and Vocabulum in Boethius' Theory of Predication", offers some of the fruits of her work in preparing a scholarly edition of Boethius' commentary on the Categories, currently only available in Migne, PL vol. 64.

The title of the book reproduces the title of a conference, sponsored by ICBS as its inaugural meeting, held in 2012. The essays here published were first delivered at that conference. The theme proves to be aspirational. Asztalos ends her essay asking: "Does Boethius' use of vocabulum and nomen make him a paradigm of Late Ancient thought?" (50). Her conclusion is that further study is needed to see whether Boethius is truly original here, and whether medieval philosophers appreciated his innovation. On the other hand, Thomas Jürgasch, one of the volume editors, ends his impressive piece (arguing that there is no difference between Boethius' philosophical and his theological Gotteslehre (141), subtitle: "Zu den formalen Argumentationszielen des Boethius in den Theologische Traktaten und in der Consolatio Philosophiae"), by saying explicitly that Boethius is a paradigmatic philosopher of late antiquity, being a transformative bridge between antiquity and the Scholastics. Elisabeth Schneider, concluding the collection with an investigation of a point of medieval law, how Boethius' famous definition of a person, naturae rationalis invididua substantia, has its influence in legal definitions of persons in the fourteenth century, ends as Jürgasch's does, with references to Boethius' followers standing on his shoulders.

But does bridge, or conduit, or source, or shoulders, justify the word paradigm? A contrarian voice finds its expression in John Marenbon's essay, "Boethius's Unparadigmatic Originality and its Implications for Medieval Philosophy." This is perhaps the most valuable essay in the collection, because Marenbon, who is not only the editor of The Cambridge Companion to Boethius (2009) but also one who has surveyed all of Boethius propria persona for his Boethius in the Oxford Great Medieval Thinkers series (2003), takes the opportunity here to make explicit an undercurrent in all of his previous work on Boethius: namely, the inadequacy of viewing Boethius as a passive conduit of learning to the middle ages. "Rather than acting as a paradigm, he is a writer who seems to resist being fitted into any of the apparently appropriate existing paradigms" (231). When it comes to logic, Boethius' commitment to Porphyry and Aristotle is "doggedly unfashionable" (240); his lack of knowledge of Stoic propositional logic in the Hypothetical Syllogisms leaves it to his medieval successors, themselves innovators, to supply his lack. Influence is unpredictable: Boethius' more subtle thoughts on what Marenbon calls "The Problem of Paganism" are lost when Consolation III m. 9 simply offers to the Middle Ages Plato's Timaeus. [1]

These essays then are best read as individual efforts, many by Boethian scholars of long standing and broad reputation, as a very good collection that is at its best when attempting to look at Boethius in broader contexts. For example, Boethian ethics in Jorge Uscatescu Barrón, "Boethius' Gluckseligkeitsbegriff zwischen spätantikem Neuplatonismus und Christentum vor dem Hintergrund einer an Gott orientierten Ethik," who works through the implications in Consolation of beatitudo = deus, that seeking beatitudo is seeking God, and that all who are truly happy are God. Some essays are a little narrower. John Magee's essay, "Boethius' Consolatio and Plato's Gorgias", opens the collection with an analysis Consolation IV.2 and its relation to the Polus colloquy and the paradoxes about the powerless of the wicked; it draws nice conclusions about Boethius' attempts to "think like a Platonist" (25) while having no interest in reproducing the psychological complexity of Plato's characters. Margherita Belli, in "Boethius, disciple of Aristotle and master of theological method: The term indemonstrabilis", charts an evolution of the word indemonstrabilis from "what is self-evident" in Boethius' logical (not theological) works and Apuleius' peri hermeneias to "what cannot be demonstrated" in the twelfth century theologians.

The lack of dialog among the entries, however, as exemplified by the lack of a general index and index locorum, which would have been very useful, makes itself felt: in the gap between Fabio Troncarelli's broad-strokes approach to Boethius' designs in his logical treatises ("Boethius from Late Antiquity to the Early Middle Ages," a rapid review of arguments and assertions primarily concerning Cassiodorus' edition of Consolation) and Marenbon's more particular, and more critical, assessments; in the lack of communication between Schneider's piece and that of Claudio Moreschini, "Subsistentia according to Boethius," a subtle examination of the interrelations of definitions person, substantia, subsistentia, hypostasis in that same definition of person: naturae rationalis invididua substantia.

But I conclude with a piece by another of the volume's editors, Andreas Kirchner. In "Die Consolatio Philosophiae und das philosophische Denken der Gegenwart. Was uns die Philosophia heute noch lernen kann", Kirchner offers a rereading of Consolation in the light of contemporary discourse on space and place. Drawing in part on the work of the anthropologist Marc Augé and his study of contemporary Non-spaces as a condition of what he calls hypermodernity, Kirchner finds that the narrator's cell is one such Non-space, offering to the narrator a true home, a place of self-discovery, where boundlessness and eternity define true knowledge. This is much more than saying that the narrator discovers himself in his isolation; that is a truth long acknowledged. Rather, that modern readers of Consolation may take the prisoner's experience as paradigmatic of their own search for self-definition in their own hypermodern experience shows Boethius as a philosopher to be reckoned with indeed.

[1] For the reader who wants a monograph that asserts that Boethius is a paradigm, an expression of the philosophical habits of his age, I would recommend Antonio Donato, Boethius' Consolation of Philosophy as a Product of Late Antiquity (London: Bloomsbury Academic, 2013); see my review at Bryn Mawr Classical Review 2014.06.20).