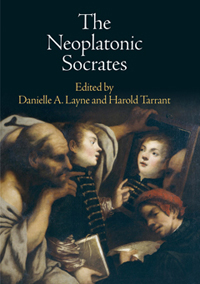 This book, which is warmly to be welcomed, is a study of the various fortunes experienced in the Neoplatonic period of Platonism by the founder-figure of the whole movement, Socrates. It consists of a set of ten essays, covering various aspects of the topic, flanked by an introduction and conclusion, by the editors, and a most useful appendix, listing authors, texts, and notable references for the reception of Socrates in Late Antiquity.

In the introduction, the editors, after a discussion of the conundrum of Socrates in general, address the question of the comparatively 'un-Socratic', or even 'anti-Socratic' nature of Neoplatonism, as alleged by various modern authorities, of whom Ronald Hathaway is selected as an example, and adduce various considerations to counter this. I am not sure that they really succeed in disproving Hathaway's contention that "the decisive character of the Neoplatonist interpretation of Plato is its obliviouness to the genuine Socratic element in the dialogues", but that is far from depriving the book of its interest and value. What this collection of essays does succeed in bringing to our attention is rather the variety of ways in which the character of Socrates, whether on the literal or the allegorical level, is utilised by the philosophers and commentators of the Neoplatonic tradition.

With the second paper, John Finamore's 'Plutarch and Apuleius on Socrates' Daimonion', we are back to the 'Middle Platonic' period, but in fact usefully examining an aspect of Socrates, his 'divine voice', which is of great significance for later Platonists, along with the whole question of the personal daemon. Finamore studies Apuleius' De Deo Socratis and Plutarch' De Genio Socratis, awarding the palm to the latter as the more insightful account, despite its mythical trappings.

Following this, Crystal Addey (chapter 3: 'The Daimonion of Socrates: Daimones and Divination in Neoplatonism'), brings the discussion of the personal daemon explicitly into the later period, making particular use of Proclus' Commentary on the Alcibiades, the other major text concerned with the topic of Socrates in this period. Here, Socrates is portrayed as a daemonic figure, leading the young Alcibiades to moral purification and a true understanding of himself. Addey gives due weight to the concept of the kairos, or 'opportune moment' for engaging in protreptic elenchus.

With chapter 4, we return to the study of Hermeias. Christina-Panagiota Manolea ('Socrates in the Neoplatonic Psychology of Hermias'). As Manolea reminds us, in studying Hermeias, we are really looking at the teachings of Syrianus, of whose lectures Hermeias' commentary is largely a transcript. For Syrianus, Socrates is a daemonic figure who, as the opening of the commentary states, "has been sent down to the world of generation, in order to benefit the human race and the young people's souls". Manolea takes us through a number of key passages developing this idea, while also suggesting, intriguingly, that Syrianus may have seen himself as Socratic in this sense.

In chapter 5 ('The Character of Socrates and the Good of Dialogue Form: Neoplatonic Hermeneutics'), Danielle Layne undertakes an examination of the Neoplatonic theory of the Platonic dialogue as cosmos, as set out by Proclus in the In Alc. This implies that the dialogue, like the cosmos, contains matter, form / nature, soul, intellect and, finally, a Good. Layne highlights the role of Socrates at each of these levels of the Alcibiades, as he leads us upwards to our own good. Strange as all this is, she suggests, it serves to remind us of the significance of the fact that Plato chose to compose dialogues, involving characters and situations, not treatises.

Michael Griffin, in chapter 6 ('Hypostasizing Socrates'), complements Layne by examining how the character of Socrates, suitably hypostatized, may be fitted into the sequence of dialogues laid down by Iamblichus in his curriculum of Platonic study. The dialogues that he chiefly deals with are the Alcibiades I, Gorgias and Philebus, first, second and tenth respectively in the first sequence of ten dialogues, together with the two members of the 'higher' sequence, Timaeus and Parmenides, utilizing the commentaries of Proclus and Damascius. In all, Socrates appears as an intermediate intelligence of one sort or another, receiving truth from above, and dispensing wisdom to what is below him, and thus a key figure in the economy of the universe.

In chapter 9, Marilynn Lawrence ('Akrasia and Enkrateia in Simplicius's Commentary on Epictetus's Encheiridion') provides an excellent account of the role of Socrates both in the thought of Epictetus, as a Stoic, and in that of Simplicius, his Neoplatonic commentator, incorporating also a survey of the argument on the possibility of akrasia from Aristotle on. As she demonstrates, whether or not one accepted Socrates' position on the impossibility of akrasia, he remains for both Stoics and later Platonists the paradigm of the encratic individual.

Lastly, we have a rather characteristic contribution from Harold Tarrant ('The Many-Voiced Socrates: Neoplatonist Sensitivity to Socrates' Change of Register'), basing himself on his beloved statistical computations, in which he demonstrates, most usefully, that the Neoplatonists, immersed as they were in Plato, and having Greek (we presume!) as their native tongue, instinctively felt changes of register in Plato's text which we can confirm electronically, by statistical analysis. They did not, however, doubt the genuineness of the Alcibiades I, which Tarrant's own analysis shows to almost certainly non-Platonic (though it may well emanate from the Old Academy).

Inevitably, as in a collection of essays of this sort on a single topic, utilizing a limited set of texts, there is a certain amount of repetition and overlap, but overall the book provides a most useful reminder of the various roles which the character of Socrates filled in the Neoplatonic period.