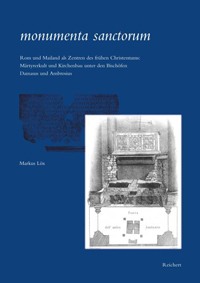 The histories of Rome and Milan in the fourth century are intertwined. As two of the age's three Christian capitals, both cities harbored ambitious individuals, attracted wealth, and encouraged innovation. [1] As the century progressed, Rome's noble families recovered prestige while the presence of the imperial court drew talent and resources to Milan; the aspiring Augustine's move to the latter from the schoolrooms and Manichean circles of the former is emblematic. In the same years, couriers not only regularly beat a path between the headquarters of Rome's urban prefect and the Milanese palace of Gratian and Valentinian II but also circulated between Milan's episcopal palace and the mansions of Rome's Christian and clerical elites. For good reasons, then, it makes sense to ask how these relations of power and exchange affected the society, religious life, and topography of each city. In monumenta sanctorum Markus Löx does that by attending to the twin enterprises of church building and martyr cult as these took shape during the episcopacies of Damasus at Rome (366-84) and Ambrose at Milan (374-97). That inquiry has produced a detailed study of the overlapping, but divergent, strategies pursued by these two influential figures at a pivotal moment in the reformation of ancient civic life and the classical cityscape.

Although Damasus and Ambrose were acquainted and shared much in sensibility and agenda, they were dissimilar in background and, it seems, temperament. Moreover, they have left us with substantially different kinds of evidence of their activities. Löx explores both issues in his first chapter (25-42) by contextualizing the biographies of the two men im Spiegel ihrer Zeit. Much in this biographischer Überblick will be familiar: Damasus' clerical origins, bitterly contested election, and long-troubled pontificate; Ambrose's governorship and celebrated confrontations as bishop, first, with Justina, mother of Valentinian II, and then with the emperor Theodosius. The story is concisely told and incorporates Ursula Reutter's now fundamental study of Damasus and his works. [2] Comparison makes clear that the policies of each bishop in respect to martyr cult and church construction were largely forged in the heat of local conflict and competition, much of it the smoldering legacy of Constantius II's earlier pursuit of anti-Nicene designs in Italy, fanned still by a homoian imperial court and hardline holdouts who had been marginalized in the struggles of the 350s and 360s.

In Chapter II (43-132), buttressed by two appendices dense with source critique (193-221), Löx examines the building activity (Bautätigkeit) of Damasus and Ambrose, sifting the textual, archaeological, and epigraphic evidence to separate certainty from assumption. In sum, his analysis limits Damasus' secure intra-mural projects to the construction of S. Lorenzo in Damaso (the first titulus in the Campus Martius) and the decoration of the titulus Anastasiae. Outside the walls, evidence supports Damasus' construction of cemetery churches on the Via Portuensis (Generosa) and Via Ardeatina (Marcus and Marcellianus) and a baptistery at S. Pietro in Vaticano. Although it is clear that Damasus installed elogia at many catacomb shrines, Löx believes it likely that his interventions were otherwise minimal, primarily consisting of adding architectural framing devices (pediments and transennae) and mensae at several martyria. Yet often, as Löx notes, subsequent remodeling obscures the Damasan phase of these monuments. Similarly, as stairways and light wells are typically difficult to date precisely, Löx would have us resist the temptation to assign them to specific episcopacies. At Milan Ambrose is given responsibility for only two extra-urban churches: the relatively grand Basilica Apostolorum (S. Nazaro) and the Basilica Ambrosiana, both of which Ambrose equipped with the translated relics of local martyrs, while eventually designating the latter for his own burial. These facts highlight a crucial difference that, in Löx's opinion, distinguishes the Roman and Milanese programs (127-32). Whereas Damasus aimed at standardizing cult practices and authenticating cult sites in competition with other ecclesiastical factions and the pretensions of aristocratic patrons, Ambrose closely linked martyr cult to his own authority through his public performances and the episcopal liturgy, staging a response to challenges he faced as the champion of "orthodoxy" in a city that was for some years home to an inimical imperial court. Though perhaps somewhat overdrawn, Löx's conclusion is a salutary reminder that behind the general rise of martyr veneration in this period stood local imperatives that shaped practices at the civic level.

The thesis pursued in chapter II is expanded and reinforced in chapters III and IV. Damasus is well known for the epigrams he inscribed throughout the Roman suburbium; these and Ambrose's relevant literary works are the subjects of the third chapter (133-52). Löx observes, as have others, that Damasus' inscribed elogia were political as well as literary documents. His verses in praise of confessors, martyrs, and bishops frequently highlighted concord and unity in a divided city while simultaneously promoting the leadership and piety of Rome's bishops, represented now by Damasus himself. To a similar end, perhaps, Damasus' Vergilian allusions advertised his cultural pedigree while the elegant Philocalian script he commissioned for many of his inscriptions was a further bid for status. Ambrose, too, Löx observes, sponsored or wrote epigraphic verse, though rather little is preserved and none of what survives (three carmina) was destined, like the epigrams of Damasus, for installation in martyria proper. Moreover, although references to Milan's martyrs - native and naturalized - are occasionally woven into Ambrose's treatises and letters and one hymn is devoted to Gervasius and Protasius and their miracles, the presentation of local martyr cult is not central to Ambrose's literary project as we know it. In his summation (151-2) Löx argues that while literary works served both bishops as a form of monumenta sanctorum, Damasus memorialized the lives and deaths of Rome's martyrs primarily to provide exempla and promote Roman exceptionalism while Ambrose emphasized his personal inventio of relics and oversight of the miraculous power associated with them.

In a briefer fourth chapter (153-69) Löx contrasts Damasus' poorly documented but apparently subdued "discovery" of the graves of the martyrs with the publicly staged affair that was, for example, Ambrose's excavation of the tomb of Gervasius and Protasius and his translatio of their relics to the Basilica Ambrosiana. Tellingly, whereas Damasus once recorded his reluctance to disturb the bodies of the saints, Ambrose organized the translation of their relics into Milan's grand churches as a "Massenspektakel" that, as Löx observes (168-9), further emphasized his personal authority.

A final chapter (171-80), then, focuses on this issue of authority. Löx has emphasized throughout his study that both Damasus, faced with local detractors and intent on trumpeting papal primacy, and Ambrose, fending off imperial rivalry, sought to enhance their claims to leadership and status through their multi-media management of the monumenta sanctorum. Yet at the same time, he argues, their means and ends did not fully coincide. In Löx's pages, Ambrose appears, as he so often has elsewhere, as the shrewder of the two bishops. Perhaps no contrast captures the difference better than the final image evoked by Löx (180): Damasus lies buried with his mother and sister in an as-yet-unidentified suburban basilica; Ambrose, who arranged for his interment next to Gervasius and Protasius in the Basilica Ambrosiana, can still be seen there today. Perhaps this is a further reminder as well of Ambrose's mastery of the media of self-representation and the advantage that came to him from observing Damasus' Roman initiatives.

Monumenta sanctorum is a sober and careful study. Löx is surely right to draw attention to the ambiguities inherent in the epigraphic, archaeological, and literary data, though undoubtedly he will elicit disagreement on specific points. Nevertheless, his evidential conservatism only makes more convincing his demonstration of the roles played by the book's two protagonists in the formulation of late ancient martyr cult and the attendant remapping of the classical city. That the means employed by Damasus and Ambrose diverged in several ways and that immediate pressures as well as larger opportunities influenced their aims should perhaps now come as no surprise. It is the contribution of this book, however, to help us see more clearly how such local histories might relate both to one another and to broader trends.