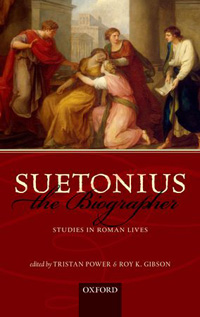 Deadpan Suetonius, functionary at the emperor's court and antiquarian researcher, is emerging from the shadows.

In a previous generation of work, including Andrew Wallace-Hadrill's marvelous Suetonius (1983), Suetonius was seen above all as a scholar. He uses technical language (including many Greek words). He cites documents. At the same time, according to Wallace-Hadrill, "He is mundane: has no poetry, no pathos, no persuasion, no epigram" (19). Subsequent assessments, such as an important article by Tamsyn Barton, have questioned just how dispassionate Suetonius' analysis is, especially in his biographies of emperors. [1] For example, to treat first the (few) positives of Nero's reign and then in a second, far longer section "his disgraceful and criminal acts" clearly highlights the negative. And at the level of sentences, Suetonius varies normal word order to emphasize the outlandish, e.g., Ibidem saepius et per complures cantavit dies ("There [Naples] Nero sang often and for several days").

This volume, originating in a 2008 conference at the University of Manchester, is the most thorough and successful attempt to date to recover Suetonius as an innovative biographer, one who "shaped his material" with "sophisticated compositional aims" (18). Tristan Power's introduction clearly sets out this goal, and in doing so draws attention to two highly distinctive features of Suetonius' style. One is "his consistent use of the third-person verb" (4) - in contrast with other ancient biographers; another his "neat compartmentalization" of material, a technique of scholarship "which he manipulates for rather different, moralistic ends in his Lives" (12).

Thirteen chapters make up the main discussion and are divided into three sections. Suetonius veteran Donna Hurley begins the first of these (on "Formal Features") with a nuanced assessment of Suetonius' organization by rubrics. While the method - which made the emperor's time in power the filling of the "sandwich" (between early life and death) - allowed inclusion of a variety of material, it worked better "for those who had long reigns and significant accomplishments" (37), most notably Augustus. An entertaining paper by Cynthia Damon ("Suetonius the Ventriloquist") surveys previous attitudes to Suetonius' style and successfully argues that his use of quotations is not just good scholarly method; the emperors' own words help the biographer to punctuate, to develop themes, to add liveliness and even irony. This is a promising approach - one of several in the volume - that could be developed further. Power neatly rounds of Part I with a discussion of the endings of the Caesars. Echoes help to set up comparisons and contrasts, Power shows, while the verse quotation at the end of the Life of Domitian takes us back to the first Caesar's descent into tyranny, marked also by a pentameter couplet (Iul. 20.2). Again, a promising approach.

Part II, "Reading the Lives", offers six case-studies mostly focused on individual biographies but peppered with more good suggestions on how the collection works as a whole. In his inquiry "Was Suetonius' Julius a Caesar?" John Henderson argues that the first Life is a carefully contrived false start, one readers of later Lives must keep coming back to. Next, Rebecca Langlands looks at how for all his obsession with improving sexual morality, Suetonius' Augustus' "most enduring moral legacy is as a powerful paradigm of marriage-wrecking" (124). Langlands powerfully relates this to the key Suetonian obsession of "the extent to which an individual has the power to shape his or her own destiny" (116). Eric Gunderson's paper forms something of a contrast, arguing that Suetonius in his Augustus himself partakes of Augustan exemplarity, while Tiberius inversely shows an emperor whose appeals to exempla discredit him. Gunderson's reading of the Tiberian bedrooms on Capri as a grotesque perversion of the Forum of Augustus is ingenious (143).

In a second paper, "Rhetorics of Assassination: Ironic Reversal and the Emperor Gaius", Hurley shows how Suetonius' multi-faceted narrative of Caligula's last hours variously suggests that the emperor's end was just, reflecting political imperatives of its immediate aftermath. W. Jeffrey Tatum reads the Life of Titus as "a succinct commentary on imperial virtue" (177): the key point is that the emperor must act as if he were perfectly moral. By bringing in the Life of Augustus, this chapter shows how the biographies are more than their parts. Finally, Jean-Michel Hulls argues that Suetonius' Domitian, in lining porticoes with highly polished stone to see only what was behind his back, exposes his inability to evaluate himself or to prepare for performance for others (contrast Augustus, peering at a mirror even on his deathbed). The imperfect Life of Domitian echoes the emperor's own failings.

While the four papers in the final section ("Biographical Thresholds") contribute somewhat less to the volume's overall goal of appreciating Suetonian biography, they are valuable for numerous reasons. Roy Gibson compares Pliny the Younger's discussion of Roman writers in his Letters to Suetonius' De viris illustribus, shedding light on the literary culture of the early second century CE. In a second paper, Power reexamines Suetonius' poorly known work Famous Courtesans, arguing that it was really "a scholarly treatise on the beloveds of Latin poetry" (234): more illumination of Roman literary culture. T. P. Wiseman fleshes out Suetonius' view on the origins of pantomime, and in doing so opens up vistas on a "multifarious Italian stage tradition" neglected by modern scholars (269). Finally, Jamie Wood situates the Carolingian biographer Einhard's engagement with Suetonius as part of a more general interest in the biographer than has been previously granted. Wood points to the high value assigned to Suetonius in works consulted by Carolingian librarians. I wonder if association with a court made them naturally more sympathetic to Suetonius.

This is an unusually excellent edited volume. While diverse and occasionally divergent, the papers overall make a strong case for the artful biographer. Their thoughtful arrangement, along with Power's introduction, enhances their impact. Established fans of Suetonius will cheer, and new ones should join them.