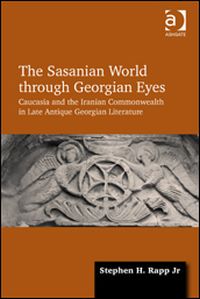 Rapp's Introduction opens with a quote by the great, recently departed, Iranologist Richard N. Frye, the end of which runs, "Hand in hand with the idea of empire went the process of mixture and syncretism; members of distant tribes and nations were brought into contact with each other under the umbrella of Persian peace and there must have been much give and take." This mixing and give and take - Iranian, Georgian, Armenian - is the theme of Rapp's book, the interwoven details of which unfold from chapter to chapter covering hagiographic and historiographic literary sources. Cyril Toumanoff, Nina Garsoïan, and others (e.g. Robert W. Thomson and Giusto Traina) have studied Armeno-Iranian connections with more or less attention in some places toward Georgian history, but there has hitherto been no thorough study of the historical, social, and linguistic ties between eastern Georgia (K'art'li or Iberia) and Iran. The volume under review is now that thorough study.

The study of connections between the Caucasus and Iran is not new, but it remains relatively understudied, and something of a little known or peripheral field. A number of studies have nevertheless appeared in recent decades, and there is a dedicated journal: Iran and the Caucasus (Brill).

Rapp has previously studied in detail the historiographic texts - that is, those in the second part of the book, the first part being on hagiographic materials - which he again turns to here. In his 2003 volume, Studies in Medieval Georgian Historiography: Early Texts and Eurasian Contexts (CSCO 601/Subsidia 113, Louvain), Rapp studied the relationships of these texts and assigned approximate dates to them, in challenge to some previous work on them. Some of Rapp's research (and other related resources) is available on his website http://bumberazi.com/, which "seeks to undermine and correct parochial, xenophobic, nationalist, chauvinistic, and imperial visions" of pre-modern Caucasia. Several of his articles touch on themes of that book and his recent volume reviewed here. A recent contribution, available online, gives a foretaste of the much broader presentation of research in the book: see his "New Perspectives on 'The Land of Heroes and Giants': The Georgian Sources for Sasanian History", e-Sasanika 13 (2014): 1-32; http://sasanika.org/esasanika/new-perspectives-land-heroes-giants-georgian-sources-sasanian-history/.

Among the themes Rapp explores is "narrative imagery as it pertains to kingship, social structure and religion" (xi), much of which is common to Iranian, Armenian, and Georgian sources. In Georgian historiography, Nimrod (Genesis 10:8-9), Nebrot'i in Georgian, is the first king, a Persian-speaking warrior expert in single combat, and the ancestor of the Iranians (cf. Kayōmart [mod. Kayūmars], the first human being, the first king and lawgiver in Iranian tradition). Mighty as he was, he fell to the skills and might of Hayk (as he is called in Armenian; Georgian Haos; Rapp, 187-190). The royal characteristics of great size and expertise in battle, here set in primeval times, will appear again in the representation of subsequent Georgian history. Kings are described with terms like čabuki "young warrior" (Middle Persian [MP] čābuk "agile, nimble, excellent"), mq'edari "mounted warrior", monadire q'elovani "skillful hunter", šuenieri "handsome", żlieri "strong", mq'ne "brave" (Rapp, 232-234). He is a bumberazi (cf. Arabic mubāriz "contender, fighter", which also appears in New Persian, including the Šāh-nāma (see Fritz Wolff, Glossar zu Firdosis Schahname, Berlin 1935, 761); Rapp's mubarīz on page 237 not quite right, and mumbāriz also seems to be a mistake), gmiri "hero", and goliat'i (< Goliath) "giant" (Rapp, 234-237). The Georgian words are analogues to descriptors in Iranian sources such as aswār "horseman, rider" and others. Hunting, vengeance for murdered relatives, foster parentage, and marriage also link these literary portrayals (238-240). Like their Iranian counterparts, Georgian kings radiate glory (MP xwarrah, "fortune, glory, splendour"; cf. the Georgian nouns didebay "greatness, glory", sue "fortune, destiny", simdidre "grandeur", and the adjective k'ueli "valiant"; Rapp, 227-232).

Following in the steps of Mzia Andronikašvili (in Georgian) and Jost Gippert (in German and English), Rapp exhibits lists of words in the studied hagiographic texts "that are indicative of the close linguistic connection between Georgian and Middle Iranian languages [i.e. Middle Persian and Parthian]" (55-62, 162-163). If an Armenian form exists, it is also generally cited. To give just a few examples:

Many of these words are very common in Georgian, not only in hagiographic texts, but generally. (The form მოგჳი <58> should be მოგჳ.) These lists, which, as Rapp notes (55, n. 112), might be augmented with little trouble, might serve as a starting point for broader comparanda, Iranian loanwords in Syriac (on which see Claudia A. Ciancaglini's Iranian Loanwords in Syriac, Beiträge zur Iranistik 28, Wiesbaden 2008, and her earlier brief article on the subject in Encyclopaedia Iranica at http://www.iranicaonline.org/articles/syriac-language-i) and other Aramaic dialects being an obvious example. Also included are annotated lists of relevant Georgian (and Armenian) onomastica (e.g. 334-336) based on Iranian names and words.

The texts that serve as the basis for Rapp's study may be known by name to readers who do not normally wade into kartvelological waters, but details about these texts and their relationships to each other. The principle texts are three hagiographies: The Passion of Šušanik, The Martyrdom of Evstat'i, and (from the otherwise historiographic collection Mok'c'evay k'art'lisay) The Life of Nino. These, with some attention given to The Passion of the Nine Children of Kolay and other hagiographies, are the focus of the book's first part (33-165). The second (and last) part of the book is devoted to Georgian historiographic tradition for this period, known in two compilations: K'art'lis c'xovreba (and its Armenian adaptation, Patmut'iwn Vrac'), a collection of thirteen separate texts; and Mok'c'evay k'art'lisay, a collection of six texts, the last of which, is the aforementioned Life of Nino; this work is known in four recensions, in only one of which the pre-Christian part has been transmitted without some disfiguring.

Armenian historiography is much better known in Anglophone scholarship than Georgian historiography, thanks especially to the translations and studies of Robert W. Thomson, and Rapp uses all of the relevant texts, such as Agat'angełos, the Epic Histories (Buzandaran Patmut'iwnk', translated and fully studied by Nina Garsoïan), Ełišē, and others. Less well-known than these hallmark Armenian texts, but well used by Rapp is Movsēs Dasxuranc'i's History of the [Caucasian] Albanians (Patmut'iwn Ałuanic' ašxarhi, translated by Charles James Frank Dowsett).

Rapp's decision to include for his quotations both the primary language (chiefly Georgian and Armenian) and in English translation will endear him both to philologically-minded readers and those who do not know those languages. Many of those quotations are quite long, but I found none of them to be quoted unduly. Generally the English translations, whether Rapp's or those of prior translators, are given in the body of the text, with the primary language in the footnotes.

In the epilogue, Rapp argues for the existence a now-lost chief resource of the pre-Bagratid parts of K'art'lis c'xovreba and other historiographic texts. He calls this lost work Hambavi mep'et'a (Report/Story of the Kings), "a K'art'velian analogue to the Sasanian Xwadāy-nāmag" (357), the Middle Persian national history, also lost, but known through later sources, including Ferdowsi's Šāh-nāma.

A host of (black-and-white) photographs ornament the book (see also, in color, the Gallery at http://bumberazi.com/).

The first appendix is an enlightening discussion of the appropriate terms for the peoples and places that appear in the book (e.g. K'art'li and Georgia, Iran and Persia), with a concluding paragraph on "civilisation" and "commonwealth". Here and elsewhere in the book, the sometimes confusing toponymy of the regions discussed remains relatively non-confusing. For example, "Georgia" (sak'art'velo) really only becomes a unified entity under the Bagratid dynasty (from the 10th/11th century), and since Rapp focuses on the pre-Bagratid period, he generally uses K'art'li (Armenian Virk', the Iberia of Greek and Latin sources, now eastern Georgia). The Armeno-K'art'velian marchlands are called somxit'i in Georgian, Gugark' in Armenian; the Georgian name is very close to their name for Armenia, somxet'i, both words deriving from samxret'i "south" (for all this see 67).

Appendix II clearly lays out the literary resources in Georgian (and some in Armenian) on the Sasanian era, with approximate dates for each text. This presentation is especially valuable for delineating in one place the constituent parts of the multi-layered historical texts. Appendices III, IV, and V list respectively K'art'velian kings and princes, Bidaxšes of Somxit'i-Gugark', and Sasanian Šāhān šāhs, all with approximate dates. (A bidaxš [MP]; Geo. pitiaxši; Arm. bdeašx is a kind of viceroy, toparch, or margrave; see 62-71.) While some of the material in the appendices may be available elsewhere, every reader will be glad to have it ready to hand at the end of the book.

As in Rapp's other works, the bibliography is especially rich, something all the more important for these resources not often readily discoverable even in large European or American research libraries. It should be pointed out that electronic editions of medieval Georgian texts, including those so often quoted and discussed by Rapp, as well as some of the relevant Armenian texts, are freely accessible through the TITUS project of Universität Frankfurt (http://titus.uni-frankfurt.de/indexe.htm).

Rapp's writing is a pleasure to read. Although full of detail, source references, some technical language, breaks for translated texts, and other things that might impede smooth reading, I expect that most readers will find themselves happily turning page to page as they follow the course Rapp has laid out. Here is a single example sentence that shows some of his refined prose: "As The Life of the Kings transitions from Nimrod's demise to the pre-Christian history of the eastern Georgian monarchy, the thin biblical scaffolding rapidly gives way to a sturdy and highly visible Iranic scheme incorporating vignettes and personalities from the Iranian epic" (198).

The book merits immediate attention from Kartvelologists, Armenologists, and Iranologists. More generally, historians of Late Antiquity east of Byzantium, especially at the time of the waning of Sasanian power, will find much of interest; Rapp's book can be read profitably alongside Parvaneh Pourshariati's Decline and Fall of the Sasanian Empire: The Sasanian-Parthian Confederacy and the Arab Conquest of Iran, London / New York 2008. At least the first part of the book will be of interest to those who work on hagiography.

The shared narrative imagery, the linguistic connections, and the meetings, martial and otherwise, evident in the history Rapp traces all serve to reveal (to use his words at the beginning of the book) "the fundamental cohesiveness of late antique Caucasia and its active participation in the Iranian world even centuries after the Christianisation of the Armenians, eastern Georgians and Caucasian Albanians" (xi). The texts at the foundation of Rapp's study are top-down history, focusing as they do on kings, toparchs, etc., but, given that the history of Caucasia, especially Georgia, is so little known in anglophone scholarship, his able treatment of these resources performs the much-needed service of presenting in one place a broad view of K'art'velian history as part of the Iranian commonwealth during the Sasanian era based on a critical reading of hagiographic and historiographic texts.