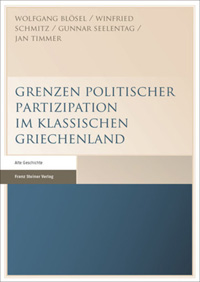 This intriguing collection of essays undertakes to demonstrate that the limiting, as much as the nurturing and expansion, of citizen participation in Greek (particulary Athenian) democracy of the 6th-4th c., was key to that political system's widely-acknowledged (if variously defined) success.

The collection consists of three essays on the 6th-4th c. Athenian political system following a paper that addresses the political communities of 6th c. Crete. The initial, non-Athenian paper is Gunnar Seelentag's excellent "Bürger sein im Bürgerstaat. Soziopolitische Integration im klassischen Kreta." Following a strong rejection of the "teleologische Meistererzählung" that has all roads lead to democratic Athens (illustrated poignantly with the popularizing work of B. Manville and J. Ober), Seelentag discusses four inscriptions from the early (i.e. late 6th c.) cities of Crete. The four belong together, Seelentag shows, in offering glimmers of the various rights and privileges, and social and economic formations that are recognizable as components of citizenship. Here they can be identified discretely as they are bestowed on select non-citizens, such as the right granted to itinerant artisans to participate in the common mess in Axos, and right of freed slaves to settle with "equal right" in Latosion. Seelentag reads the four inscriptions as preliminary indications of the rising concept of citizenship. This is certainly right, but we also see the complexity of citizenship, the interweaving of social, economic and cultural elements that become crucial (if not always fully acknowledged) components of classical Greek citizenship.

The following two contributions (Winfried Schmitz's "Legitimation durch Mehrheitsentscheidung? Partizipationschancen und Partizipationsgrenzen im Athen des 6. und frühen 5. Jh." and Wolfgang Blösel's "Zensusgrenzen für die Ämterbekleidung im klassischen Griechenland. Wie groß war der verfassungrechtliche Abstand gemäßigter Oligarchien von der athenischen Demokratie?") turn resolutely to democratic Athens and advocate for what I take to be the collection's major point: that the success (i.e., the stability) of the Athenian democracy reflects a strategic manipulation and careful control of popular participation, rather than its unlimited expansion. In the process, both Schmitz and Blösel essentially understand citizenship in narrow terms as participation in the assembly and service as a magistrate. This tight focus on the institutional structure of Athenian civic participation and, likewise, on the concepts of legitimacy and system effectiveness (Systemeffektivität), anticipates (and, to a degree, depends on) the more explicitly analytic treatment that Jan Timmer gives in the final essay of the collection.

In his careful paper, Schmitz offers a reading of early Athenian democratic political history from this perspective. Schmitz draws on the Solon's class structure, his use of voting, his reorganization of the Areopagus and his stasis law (inter alia) to frame Solon's reforms from this perspective, and he goes on to discuss the anarchic and tyrannical periods and finally the reforms of Cleisthenes that brought a degree of order to the Athenian political system. While his view of ostracism is idiosyncratic (and needs more support that he gives it), Solon and the archaic Areopagus profit from his paper.

More ambitious (although not so successful) is Blösel's claim that the Thetes, the lowest class of Athenians, were never (not even in the late 5th c.) permitted to serve in the colleges of officials chosen largely by lot that the Aristotelian Constitution of Athens describes most fully. Blösel may well be right, but the evidence does not support a conclusion as definitive as he wants. To his credit, however, he does make it clear that the opposite position, which is stated more often as simple fact, is cavalier and unsupported. Whether the Thetes were included or excluded from the offices, and, moreover, whether, they were included or excluded by law or convention, is not possible to say.

The collection concludes with Jan Timmer's "Teilhabe und Systemeffektivität. Überlegungen zur Legitimität von Entscheidungen im klassischen Athen." The contribution seeks to argue against the belief (Timmer thinks it is common) that broad political participation serves as a valid "Indikator für die Qualität des Verfahrens der Herstellung kollektiv verbindlicher Entscheidungen" (95). This view is shared by Schmitz and Blösel, but Timmer's paper is distinctive in seeking to examine the Athenian political structure through a lens borrowed from contemporary political science theory (most importantly, the neo-institutional work of Fritz Sharpf). His goals are to make this analysis meaningful in a democracy that is still in a nascent stage, and, at the same time (albeit less explicitly), to advocate for place of 5th and 4th c. Athens in contemporary discussions of democracy. These are both important. Greek democracy cannot be shelved as an antiquarian interest, and Timmer is right to look for traces of rational political principles in Classical Athens (and to attempt to derive metrics from them), even if they were never explicitly articulated by Athenians. The problem, however, is that the idea of rationality that guides him and, in particular, his emphasis on legitimacy and system effectiveness elides many of the most striking and significant differences between ancient and modern democracy. Timmer's abstract, isomorphic analysis makes serious assumptions about political behavior and citizen status, and assumes that the Athenian democracy is best understood as a method (or system) of decision-making, whose value to the practitioners (and to us) can be measured by evaluating those decisions. These are claims that need much more argument. Moreover, in pursuing his analysis, Timmer closes himself off to much important work in recent scholarship on Greek democracy. Timmer shows little interest in citizenship as an imaginary construct sustained (sometimes quite precariously) by a complicated set of cultural practices. (This, it must be noted, is a major element of Seelentag's discussion of archaic Crete). A richer view of Athenian democracy and democratic citizenship would not necessarily vitiate a productive use of the Athenian democracy in the contemporary political world. Where the Greeks seem most alien is perhaps just where they can prove most valuable - particularly (as in the contemporary West) when citizenship is increasingly fragmented and, in its fullest form, is increasingly the possession of a privileged elite.

Its limited (and limiting) institutional framework notwithstanding, Grenzen politischer Partizipation in klassischen Griechenland deserves the attention of scholars of Greek political history and from students of democracy: its main theses on Greek democracy are largely independent of its analytical framework; not even those who find reject that framework will fail to appreciate its boldness, intellection honesty, or the many fine insights of its individual contributions.