Kimberly A. Smith: The Expressionist Turn in Art History 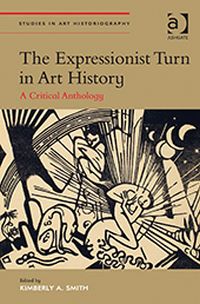 The multi-authored The Expressionist Turn in Art History: A Critical Anthology presents inaugural translations into English of ten German texts emblematic of the monumental shift in the perception and practice of art history at the beginning of the 20th Century. Organized into six sections of primary source selections, each translation or group of translations is paired with secondary analyses providing background and interpretation.

One of the book's main points is that individualistic scholars underwent radical personal revolutions of mindedness, manifesting as groundbreaking methodology in their writings, and that these texts require further examination in contemporary assessments of Expressionism, itself an unstable term. [1] Perhaps a more accurately descriptive title for the book might be The Expressionist Turn in Art Historians. By any name, though, this thoughtfully-executed book ought to help propel these texts and their authors definitively out of the rarefied world of specialized scholarship and into the canon of accomplishment and influence.

The book is launched by a densely informative introduction by editor Kimberly A. Smith, providing both reams of documentary data and a thorough enunciation of the showcased primary sources. Smith painstakingly explains historiographic and academic lineages. For example, it is not immediately clear why some "Expressionist" texts focus not on the art of the Brücke or the Blaue Reiter but rather on anachronistic paintings, sculptures, and prints, often Italianate exempla, considered at the time to be part of the Renaissance or Gothic periods. Smith's elaboration clarifies why and how the "turns" in question by Wilhelm Worringer, Max Dvořák, and Heinrich Wölfflin constituted upheavals to the principles that had governed the interpretation of the image world since the time of Vasari. Such substantive historical underpinning, along with very serviceable translations, makes a strong case for this book's usefulness to Anglophone students of German Modernism who may not yet be fluent in German.

Readers of all backgrounds will be at least somewhat familiar with the works and positions of Worringer, Wölfflin, and Dvořák. The passages selected add to this body of knowledge while simultaneously calling attention to how even the very-well-known lack much substantial "second tier" penetration of literature and lore. Dvořák's "Tintoretto" (1920) and forward to Oskar Kokoschka: Variations on a Theme (1921) expand on some of the simmering questions of identity, modernity, and cultural conditioning raised in his preceding Naturalism in Gothic Sculpture and Painting (1918). Wölfflin's "Italy and the German Sense of Form" (1921-1922) and "Principles of Art History: A Revision" (1933) further the formulation of "art history as the history of ideas", an intellection interrupted by World War I which resumes in these pieces written in its aftermath. Given the monumentality of the rupture, it is perhaps not surprising that the texts from before 1914 seem more cohesively "Expressionist", telegraphing both a certain urgency of the spirit and a trace of utopian hopefulness.

The popularity of Worringer's milestone Abstraction and Empathy: A Contribution to the Psychology of Style (1907-1908) continues practically undiminished, so the inclusion here of the introduction to his third book, Old German Book Illustration (1912), is useful in charting Worringer's revisions to a "psychology that fosters specific types of art." (61) Kathleen Chapman refreshes Worringer's argument that German art characteristically aspired to the task of transcending the mimetic in order to acknowledge the spiritual, noting that "the German propensity for abstraction was expressed most clearly in illustration, and the medium most suited to illustration was the woodcut." (62) Yet the cautious Old German Book Illustration marks Worringer's shift to a more programmatic and conservative stance.

The Expressionist Turn in Art History's capstone is in resuscitating the words of several authors less well-known than the aforementioned luminaries, even in German scholarship. The Berlin art historian Ernst Heidrich and his Munich counterpart Fritz Burger, who were both killed in action in the war, were lauded in their time, however, for good reason.

Heidrich, a disciple of Wilhlem Dilthey, was known for his imaginative "re-experiencing" of Northern European post-iconoclasm paintings using contemporary cultural leitmotifs, a preemptive subversion of "the period eye". A selection from Heidrich's Flemish Painting (1913), the translation printed here, is itself part of the larger series Art in Pictures produced by Jena publisher Eugen Diederichs. It is Heidrich's relationship to this enterprise that is the focus of Eveliina Juntunen's introduction, and her lively account of the freewheeling world of early 20th Century German book publishing eclipses the primary text, which is perforce somewhat formulaic.

Of these scholars of fin-de-siècle and pre-war Austria, Switzerland, and Germany, Burger is probably the most neglected. In this respect "Expressionism and Empathy: Fritz Burger's Theory of Art", Elena Filippi's preamble to an excerpt of Burger's Cézanne and Hodler: Introduction to the Problems of Contemporary Painting (1913), is brilliant in every sense, giving extraordinary illumination to the cultural and intellectual life of modern Berlin and Munich and their interlocking artistic and academic circles.

This abundance of local detail animates the chronicle of Burger's progression from his formative "transcendental" consideration of 16th Century Venetian sculptor Andrea Palladio via Wölfflin's Prolegomena to a Psychology of Architecture (1886), enabling Burger "to see buildings as living organisms." (103) Advancing this movement, and inspired by his friendship with Wassily Kandinsky and Franz Marc, Burger infuses Cézanne and Hodler with "a metaphysical irrationalism" (108) tempered with precise "instructions" for looking at and interpreting modern art - a tactic the Blaue Reiter artists were in favor of and often indulged in themselves.

In describing Marc's depictions of animals ("The doe in visionary white is like a dream image in the dazzling dark") (109), Burger seems to fully inhere, and in turn successfully externalize, the "expression" in "Expressionist art history". Burger's colorful, poetic idiom is especially difficult to render across languages, a nod to the skill and delicacy of translator James Gussen.

Carl Einstein's writings were until recently similarly all but unknown outside the German-speaking world. Einstein's prickly essays on Kandinsky, Ernst Ludwig Kirchner, and George Grosz (all of whom he befriended personally) from his Art of the Twentieth Century (1926) are far more than rote encyclopedia entries. Einstein's descriptive passages employ the short sentences and jumpy cadence of the manifesto. Of the painter he concedes is "a daring adventurer", Einstein declares: "Painterly egoism, broken open vertically; centripetal inbreeding. Kandinsky smashed a few windows." (309)

Charles W. Haxhausen's companion section indeed focuses on Einstein's problematic relationship to Expressionism. While Einstein jauntily dismissed the new German painting as "a debased variety of French arts and crafts" (273) he was at the same time crucially aware of the need to address and comprehend modern art - which to Einstein meant Cubism - and to explain its synthesis of abstraction and primitivism.

Over the past decade Einstein's legacy actually has undergone a thorough disinterment owing to the efforts of Maria Stavrinaki of the Université Paris I-Panthéon-Sorbonne, whose research and translation projects on the historical avant-garde in general and Einstein in particular are meticulous, abundant, and innovative. [2] It is a bit disappointing not to see her body of work referenced even in a footnote in this otherwise generously international-minded project.

Despite this small oversight, this book is a treasure for all who are interested in the complexities and contradictions of the emergence of German Modernism's interpretive mode. Given the contemporary relevance of the need for a drastic change in art historical perception and practice, it is high time for an Expressionist revival, or at least arrival, in the Anglophone world. The Expressionist Turn in Art History does much to pave the way.