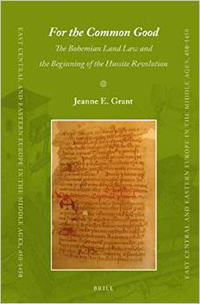 This is an original contribution to our understanding of the early Hussite Revolution. Jeanne Grant sets out to explain how the Hussite Czech nobles justified their rejection of the hereditary heir to the Bohemian throne. She concludes that Sigismund was deemed unsuitable as a result of a confluence of legal, political and religious thinking. By 1420, these factors had coalesced with sufficient force akin to a powerful river behind a dam which could no longer sustain the pressure and that dam eventually burst into rebellion and crusade.

Jeanne Grant accurately points out that in matters of authority, much attention has been devoted to the struggles between kings and nobles but the legal foundations for these conflicts have seldom been explored or properly interrogated. This revised doctoral thesis provides a very reliable point of entry into an examination of the legal basis for Hussite resistance to Sigismund. It is useful to underscore that Czech legal tradition was neither isolated nor especially unique. This book shows without doubt that the western legal tradition is reflected in late medieval Czech law and there is plenty of evidence for the influence of German and canon law and, to some extent, one can also find traces of Roman law. By the fifteenth century, customary law in Bohemia had absorbed all of these legal traditions. By the beginning of the Hussite revolt, land law and royal law had evolved into separate legal systems. The focus of the book is on the former.

For the Common Good is divided into five major sections. In chapter 1, we find a delineation of the relations between the king, the land, the law, and issues of authority. Chapter 2 examines the legal tradition in relation to revolution and representation. Chapter 3 analyses the lawbook of Ondřej of Dubá. Chapter 4 looks at the Hussite Revolution and integrates Grant's thesis of a confluence of legal, political and religious beliefs which formed resistance to the royal claims of Sigismund. Finally, chapter 5 examines the nature and extent of legal continuity as maintained by the Czech nobility.

The heart of this book can be located in chapter three. Here, we are introduced to the life, work, and especially the lawbook of Ondřej of Dubá. Composed between 1394 and 1412, the Bohemian Land Law is a high water mark in the legal history of the Czech lands. Ondřej of Dubá may have been a self-taught jurist and his lawbook is based clearly on precedents and rulings from fourteenth-century land records. The perspective is unswervingly pro-royalist. Ondřej of Dubá held a very long tenure as the ranking judge on the land court during most of the reigns of Kings Charles IV and Václav IV. His lawbook may be evaluated as the first comprehensive Czech lawbook in terms of land law and as such is of seminal importance. Jeanne Grant uses an early twentieth-century edition of the lawbook which divides the text into 155 articles and sixty-eight printed pages. We learn from Ondřej of Dubá that his motivation for composing the lawbook was to witness to truth and order. The scope of the lawbook provides vital and useful information about the duties of governmental officials, the function and process of judicial procedure, the prevailing types of law in the Czech lands, and it is reasonable to conclude that the work of Ondřej of Dubá represents an effort to standardized land law. It is not possible, however, to make any definite determination about how or in what ways the lawbook was used.

"Ondřej z Dubé had many reasons for writing his interpretation of the land law, but one permeates them all. He professed that he wanted to support law and order by recording the laws, clarifying the rules of justice, and replacing the outdated old ways" (63). In sum, Ondřej of Dubá wished to advance and facilitate the common good of the land and the people.

Ondřej of Dubá died before Jan Hus was executed and prior to the outbreak of hostilities which led to war and also to the rejection of Sigismund's ascension to the throne following the death of King Václav IV. An examination of Hussite political documents, especially the widely-disseminated manifestoes, reflects the confluence of legal, political and religious thinking which, as Jeanne Grant argues, formed the justification and legitimation for a formal repudiation of Sigismund which occurred during the Diet of Cášlav in 1421. The fifth chapter of this book is a useful supplement to the 1978 study of the Hussite nobility by John Klassen. Jeanne Grant fully integrates the legal question into her analysis of the barons and uses this vital element to explore the obscure line of demarcation which existed between the defenders of official religion and the heretical Hussites. Her delineation and explanation of the actions and decisions of the nobility through the crucial years between 1415 and 1421 serves to illuminate the motivations of the nobles who favoured the Hussites but also provides nuance with respect to the law which has not been adequately addressed previously in the historiography of early Hussite history.

Sigismund was clandestinely crowned in Prague Castle in the summer of 1420 following the defeat of the first crusade armies at the hands of the Hussite military commander Jan Žižka. Immediately thereafter, he absconded with the land records. This had the effect of rendering that court unable to function. Jeanne Grant argues that Sigismund did not intend with his action to overturn existing Bohemian law but rather the taking possession of the records was intended to preserve the law. This is an interesting proposition. The court ceased to function and was moribund for the next fifteen years. After Sigismund was finally enthroned in 1436, and the land records restored, the court resumed its activities. Jeanne Grant points out that the removal of the records had the immediate effect that the land law was temporarily subverted and rendered ineffective. Of additional importance, is the observation and conclusion that there is no evidence in the lawbook of Ondřej of Dubá, or in the Hussite manifestos, or yet in the proceedings of the national Diet of Cášlav to suggest that anyone was considering an alternative authority basis in the kingdom. A discussion of the additional pro-Hussite Czech political documents written by Vavřinec of Březová and preserved in the so-called Budyšinský manuscript only reinforce this argument.

This is a short book but one which may be highly recommended for its incisiveness, and its contribution to our understanding of the early Hussite movement and the legal history of Bohemia. There are three suggestions. First, the rejection of Sigismund as a legitimate heir in 1420 does not necessarily vacate the legitimacy of the coronation itself. The enthronement was not repeated in 1436. Issues around the relationship between legality and legitimacy might be explored further. Second, while Jeanne Grant specifically excluded an examination of radical Táborite doctrine from her analysis, it might be useful to look at the nature of law and the extent of legal thinking in the Táborite communities between 1419 and 1452. There is some evidence to suggest that alternative authority theories were contemplated then and partially implemented. Third, it is hoped that another volume on Czech legal history might appear extending the examination contained in this book deeper into the changing worlds of fifteenth-century Bohemia. If Ondřej of Dubá wrote his lawbook for the common good of the Czech world at the end of the Middle Ages, then Jeanne Grant's study may also be considered a labor of solid scholarship for the common good of scholars interested in understanding better one of the compelling chapters in the history of medieval Europe.