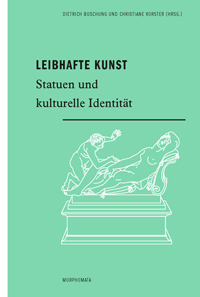 Still today, more theoretical discussions of sculpture are scarce, particularly when compared with discussions of painting. This is even more so the case, it seems, in German-language publications, maybe because of the strong two-dimensional leaning of German Bildwissenschaft. The present volume, originating in a workshop organized by the editors at the Staatliche Kunstsammlung Dresden, in the context of the Morphomata International Center for Advanced Studies, Cologne, is accordingly a welcome addition to the growing literature dealing exclusively with sculpture.

The question the editors pose is, with images of the destruction of sculptures in the Middle East freshly imprinted on the collective mind, very much pertinent, namely: in what ways does sculpture shape and is shaped by cultural identity, and why is it sculpture in particular that has played such an important role in these processes? The latter part of the question, the editors argue, has everything to do with sculpture's physical presence; sculpture has the capacity to literally embody something, be it a person, deity, or personified concept. If these perspectives should provide ample material for wide-ranging discussion, it is maybe typical to realize that only a small number of the contributors has taken seriously the questions posed by the editors. Moreover, it appears that none of the authors has taken note of more recent theoretical debates in the field of art history and neighbouring disciplines that deal precisely with the questions here posed. Somewhat unexpectedly, after reading the introduction, another common theme becomes much more apparent, that is, the continuing reception of antique sculpture in later periods - a question that, though not uninteresting in itself, brings little in terms of rethinking the significance of sculpture as an art form.

The notable exception, here, is the excellent contribution by Tonio Hölscher, in which the author basically attempts to rethink the early history of Greek sculpture in terms of its social role. In doing so, he explicitly distances himself from the question of aesthetics or style: "In light of the question of social praxis, that of aesthetic production is secondary." (19) Though Hölscher speaks of a time where terms such as museum, artwork or viewer are but anachronisms, many of the insights in his paper have their significance beyond its chronological restrictions. Indeed, also in the era of the museum sculptures are a part of "social spaces and their social practices" (42), a connection that, here too, is reciprocal.

Where the archaeologist has only the scattered traces of long lost cultures to work with, the explosion of available sources since the Renaissance allows scholars to reconstruct any number of contexts in which sculpture could make sense. Unfortunately, this often results in a loss of attention to sculpture's specific qualities, particularly when it boils down to a comparison with other, arguably less "bodily" forms of art.

In her thorough discussion of Giambologna's bronze Venus / Fiorenza, Doris Lehmann situates the sculpture within the frame of the so-called paragone-debate, thus presenting it as an a priori failed attempt to trump Apelles' long lost Aphrodite anadyomene painting. And yet, the one time a sculptured depiction of this subject matter makes explicit its source - a reference to Ovid's Ars amatoria on a relief attributed to Antonio Lombardo - an allusion is made not to the art of painting, but rather to that of sculpture. In describing the transformation of "rough, uncut stone" into the nude figure of a Venus, "wringing out her spray-wet hair" [1], reference is made to the materiality of sculpture as well as the artist's technical feat in the material's radical transformation. One wonders what a discussion of Giambologna's Venus, which had real water running from her braid, could look like when considered from this perspective, rather than from that of the old cliché of the paragone.

Till Förster's critique on the tendency to project western divisions between art forms on other cultures is unquestionably to the point, though, while he certainly discusses the social role of images, one could, in light of his critique, ask if it still makes sense to relate these images to the conventional notion of sculpture. Where he sets out to show that, in his own words, "African sculpture [...] lives" (254), his argument focuses for a significant part on photographs. And yet, the author refuses to accept that, by some reference to visualised "mental images", the mediality or materiality of these images is irrelevant to tradition. Rather, he claims, "new material possibilities change existing practices." (258) Still, what this means for sculpture as an art that can make something or someone physically present, and what is lost or gained in the process of its replacement by the medium of photography remains largely obscure.

The remainder of the contributions to the volume present rather conventional topics. Of course, that doesn't make them without merit or interest and at least a handful of contributions will certainly be of interest to specialists in this or that field. In terms of the questions posed by the editors, however, they have little to offer, apart maybe, from illustrating that the study of sculpture still has a long way to go.