Ido Israelowich: Patients and Healers in the High Roman Empire 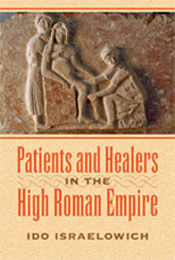 This is an ambitious and provocative study of medicine in the world of the Roman Empire. After a general introduction, two chapters discuss the identity of physicians in the Roman world and patients' understanding of health and disease, which are then illustrated by a look at three foci of their interaction, in the home, in the army, and at a shrine, spa or baths. A wide range of different sources are used, many unfamiliar to the general reader, in order to show that there was a common language and common assumptions about health care in what is considered a "unified health system" (134).

But such broad formulations, buttressed by appeals to Kleinman and Geertz, are a tempting snare. Often they merely repeat long familiar conclusions. Much healing took place within the home (alas, there is no reference to Véronique Dasen's work on the health of babies and children), few healers rejected the aid of the gods, and many physicians played leading roles in the cult of healing deities. Recent discoveries at Rhodiapolis and Allianoi (mis-spelled and wrongly located on the sea coast) show an interesting symbiosis, see Early Christianity 5, 2014, 371-389, that extends Dr Israelowich's observations considerably. Other generalisations, as the author occasionally acknowledges, are undermined by the varied nature of the evidence, which is far more diverse and fragmented than is allowed for.

There are, in addition, three major problems. One is simply terminology, which frequently lacks rigour at crucial points. 'Health tourism', the subject of the final chapter, is an odd phrase to describe attendance at the baths, and there is the implication that many sufferers would travel great distances to a suitable shrine or a famous healer. Paradoxically, few such tourists are known for Cos, Ephesus or Alexandria, a failure of our evidence, and the massive 2005 study of Asclepius cult by Jürgen Riethmüller is not mentioned. Such formulations as (128) "the civic landscape ... should be understood as a powerful agent of the health care system" and "the general understanding [...] that (cities) were designed to meet the requirements of public health", will appear confusing at best.

A second assumption running throughout the book is an apparent belief in deliberate agency by a range of individuals, including the emperors, and even concepts and things. Pliny, Vitruvius and Galen are "prominent agents" of a "pre-existing network that encouraged the sick to take to the road" (124). Legal decisions are seen as imposing new duties rather than reacting to events, and, despite the caveats expressed about what was involved in professional education, it is still assumed that a centralised empire must have existed that imposed rules and regulations. So a decision that, in cases of disputed pregnancy, the midwives must be chosen by the judge rather than either of the contending parties implies "a certain level of state regulation of midwifery". (82) Disputes over tax-immunity, which show the frequent eagerness of local councils to dragoon as many tax-payers as possible, become a sign of imperial interest in promoting medicine (and, although the term is never adequately analysed, often 'Hippocratic' medicine), although the case of Psasnis (34-44), hardly proves this. The governor of Egypt allowed his claim as a doctor for tax immunity, even though he joked that his patients may have thought him incompetent. This dokimasia seems at most to have been an individual's declaration of his occupation, whether or not accompanied by the testimony of others.

Dr Israelowich lays greatest stress on the army and its role in not only forming an "imperial medical corps" but also in spreading this medicine throughout the empire. Little attention is given to what happened during the Civil Wars of the Republic, and most credit is given to Augustus (93), who "probably dedicated a whole section in his Disciplina Augusti to the administration of health care in the army, [...] but the motive behind it must have been the constant need for military physicians." (The author rightly notes that no fragments of this rulebook survive.) Physicians "were granted a monopoly over the provision of heath care" (93), and "a fully qualified veterinary surgeon was in charge of the men looking after the animals."(104) The Roman army "improved the quality of health care", (106) especially by treating the local population. While this may have been true for some regions, and there is evidence for ex-army doctors moving into civilian practice, as for example the doctor from Rimini, numbers can never have been substantial. The example of Longinus, a young man aged 23, doctor in the Seventh Legion, and honorary member of the town council of Drobeta (106), hardly indicates a doctor who had retired from service, but rather that the council wished to make use of his (family?) wealth, even if he was serving in a fortress many days ride away from his home. The "form of the military base [...] advocated a Greek type of health provision", (104) although the evidence that each century of the legion was assigned a cubicle in the hospital, "part of an imperial design" (103), is far from clear. Page 99 offers an excellent example of this exaggerated style of argument that moves from a simple piece of evidence to an unlikely conclusion. Daily and weekly rosters show men sick or absent, a drain on resources and fighting capacity. It is likely that some, if not most, were signed off by a unit doctor, but to go from there to assume that "the Roman army sanctioned an official magistrate with the responsibility for distinguishing the fit from the unfit" is a strange use of the term magistrate, which is applied on the next page to the officer in charge of the hospital.

This book contains lots of challenging ideas, but often they are the result of deductions made on the basis of a handful of texts and on the assumption of a largely static and uniform Roman Empire. The author is aware of the diversity of medical practices and ideas, as his footnotes and some of his comments show, but by trying to find a single "health care system", in Kleinman's terms, he either repeats what is obvious or builds an overarching theory that takes little account of the gaps in our evidence, the bias of the sources, and the differences between the regions of the Empire. Far too often statements are couched in language that is at best ambiguous and at worst misleading, especially for a beginner at whom this book is aimed. A social history of medicine in the Roman world is still to be written.