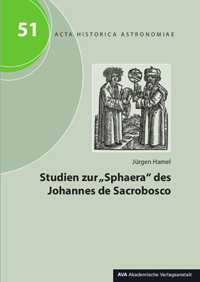 This book is the first full-length book on the Sphaera of Sacrobosco other than Lynn Thorndike's The Sphere of Sacrobosco and its Commentators (Chicago, 1949) which suffered from being published during the war. It deals only with the printed editions of the Sphaera, not the numerous manuscripts (this restriction should have been indicated in the title). Altogether the work was printed 222 times between 1472 and 1650 (compared with over 300 manuscripts). Several translations into the European vernaculars were made, of which the earliest was into Old Icelandic.

Hamel discusses all the the printings of the Latin text, and devotes a separate section of the book (151-99) to the German translation by Konrad Heinfogel and its printings. The commentaries of Hertmann Beyer, Sebastian Theodoricus Winshemius, Thomas Blebelius, Caspar Peucer and Henricus Brucaeus, were also printed several times between 1549-1629. Hamel illustrates the text richly with reproductions of pages from printed editions. These give some idea of the different formats of different printings, and of the quality of the diagrams (sometimes in more than one colour). The subjects include the concentric spheres of the cosmos, eclipses, the roundness of the earth and the armillary sphere (symbolising the title). The different formats of commentaries (dialogue, a series of questions, continuous narrative, etc.) are discussed.

The heart of the book is the description of the 222 printings of the Sphaera, in Latin and then in European vernaculars. These are arranged in strict chronological order. Commentaries are included when they contain the original text as well. A separate list of 'works on John of Sacrobosco without passages from the Sphere' is provided (134-136). The last part of the book consists of a transcription of the German translation of the Sphaera made by Konrad Heinvogel and printed in 1516. It is debatable whether such a transcription is necessary when the book itself is freely available on the website of the Bayerische Staatsbibliothek. But it does add to the comprehensiveness of the cover of this book which documents in a clear and pleasing way the importance of John of Sacrobosco's work in the teaching of cosmology in the early modern period.