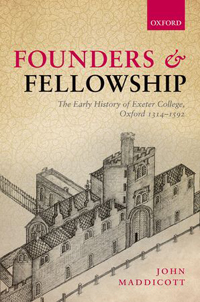 Histories of individual Oxford colleges are not a neglected genre. In addition to accounts written in earlier centuries, which were of interest mostly to archivists and alumni, there have been a number of studies in recent years that attempt to place the early history of a specific college in the context of the development of the University of Oxford and the church, state, and society in late medieval and early modern England. Timed for the 700th anniversary of the founding of Exeter College in 1314, the fourth oldest college at Oxford, this book is the first modern account of its early development.

The book begins with a detailed account of the life of the founder, Walter Stapeldon, covering his educational preparation, his ecclesiastical and political career, and his founding of Stapeldon Hall, which became Exeter College. The approximate date of his birth as well as the steps in his education are calculated on the basis of the late John Fletcher's description of the Oxford undergraduate program in the first volume of The History of the University of Oxford. There are problems, however, with Fletcher's interpretation of the arts curriculum at Oxford and with Maddicott's interpretation of Fletcher's description. The Oxford program in arts was based on that of Paris and operated according to demonstrated knowledge of certain texts acquired through ordinary and cursory lectures far more than a specific number of years in the classroom. Depending on the qualifications of the candidate, studies leading to bachelor in arts usually took three years (Fletcher, 384). Determination, in which the bachelor lectured on a text, took place during and after Lent in the fourth year, but did not continue into the following year. Licensing and inception as a master in arts took place after a further year or more of study and residence, dependent again on qualifications and financial resources. The entire process could be completed in five or six years, shorter than Fletcher outlined, or take much longer. As Maddicott admits, we simply do not know what the situation was in Stapeldon's case. Moreover, the degree program, contrary to Maddicott's description, was not divided into studies in the trivium of logic, grammar, and rhetoric for the BA and studies in the quadrivium of arithmetic, geometry, astronomy, and music for the MA. Although the curriculum in arts continued studies in the trivium and quadrivium, which along with Latin proficiency were to be acquired before university study, the university arts program was principally based on Aristotelian texts and concentrated on logic, natural philosophy and the art of oral disputation throughout the entire arts program.

Chapter two of Maddicott's book is devoted to the college itself between 1327 (the year after Stapeldon's death) and 1500, with a description of sources (especially the rectors' accounts, which are similar to the proctors' records for a nation in the arts faculty at Paris), the regional and social origins of early fellows, their academic careers, an excellent discussion of the growth of the college library, and the structure and administration of the college. The following chapter extends the account of those factors into the sixteenth century up to 1560 and the impact of the Reformation on the college. Chapter four concerns the financial crisis of 1561-1565 that threatened the survival of the college, the role of William Petre in re-endowing and refounding the college in 1564-1566, and the Catholic conservatism of southwestern England, the Petres, and the newly refounded college. A final chapter brings together Maddicott's conclusions.

There is much in Maddicott's book that expands our knowledge of late medieval and early modern Oxford as well as the role of its fellows in the educational, political, and ecclesiastical life of that time. As a detailed and thorough history of the early centuries of Exeter College it is excellent and draws on a wide variety of manuscript and edited sources. By concentrating almost exclusively on those associated with the college as fellows, rectors, and donors, however, some dimensions of its history have not received as much attention as they might have. For example, little attention is given to sons of noble families from southwest England, Devon in particular, who attended Oxford but were not fellows of Exeter College although they apparently had some affection for it. As was true of many colleges at Paris, Oxford, and Cambridge, fellowships by statute at Exeter College were limited to those of modest financial resources, which in turn meant an absence of sons of wealthy families until a few exceptions were made in the sixteenth century.

The additional restriction of fellowships to those studying in the faculty of arts, as distinct from colleges that granted fellowships to those studying theology, canon law, civil law, or medicine, meant that Exeter had fewer alumni who had prominent intellectual or administrative careers at Oxford or later in their post-university life. Both these points are repeatedly acknowledged in the book. However, although Maddicott mentions donors and benefactors of the college who were not alumni of the college, that category of 'friends of the college' was larger than it appears in the book and constitutes a dimension worth study in order to place the college in a larger social and intellectual context. In addition to fourteenth- and fifteenth-century bishops of Exeter, a category of benefactors discussed by Maddicott, there were other medieval graduates of Oxford who had not been fellows of Exeter but who, perhaps because of their Devonshire roots, donated to the college. For example, John Northwode, the nephew of John Grandisson, bishop of Exeter, who had Richard Fitzralph as his tutor and later became chancellor of Oxford, apparently donated or bequeathed his copy of Innocent IV's Apparatus in Decretalium libros (Exeter College, ms 29) to the college. The case of Grandisson may be another example of a donor and benefactor whose affection for the college stemmed from his Devonshire roots and not simply because he later became bishop of Exeter. The association of such figures with a wider intellectual world that included Paris and Avignon, the college's commissioning works of John Dumbleton and William Heytesbury for their library, and William Rede's gift of books in theology to the Exeter College library that would be useful for post-arts training in theology or the priesthood, suggest that those studying at Exeter were not as isolated from the intellectual currents at Oxford and Paris as might seem to be the case.

Founders and Fellowship is a welcome addition to the literature on Oxford colleges and, indeed, to our understanding of education and college life in late medieval and early modern England. It is strongly recommended for reading by those interested in that field of study.