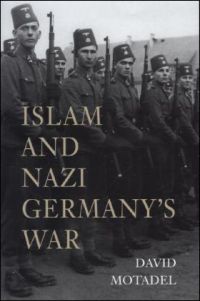 The relationship between Islam and Nazism, or the Arabs and the Third Reich has increasingly become a topic of interest for historians and the broader public in recent decades. Pictures of the mufti of Jerusalem, Amin al-Husayni, together with Adolf Hitler are used as a compelling example of a similarity between Islam and Nazi ideology based on a "mutual contempt" for Jews.

David Motadel subtly but surely debunks this narrative by showing that German Islam propaganda mostly failed, especially in the Middle East and North Africa; and that the motivations of those Muslims who allied with the Nazis were often not ideological. As 150 million Muslims lived under French and British rule, and 20 million in the Soviet Union and as the Germans entered Muslim territory in the Balkans, North Africa, the Crimea and the Caucasus, Islam was considered strategically important. In 1941-42 Berlin intensified its campaign to present the Third Reich as defender of the Muslim world. The Foreign Office, Wehrmacht, and East ministry were involved in this policy, but eventually the SS took the lead.

In this meticulously researched book Motadel makes use of more than 30 local and national archives, in fourteen countries but mostly in Eastern Europe and Germany. The book is split into three parts: the first traces the background of Germany's engagement with Islam before WWII, the second analyses German Islamic policies in the war zones, and the third the role of Islam in German policies towards Muslim soldiers in the German army.

Motadel demonstrates that German Islam propaganda focused on anti-Bolshevism, anti-Judaism and mainly British anti-imperialism. In the Crimea, Caucasus and the Balkans, the SS and the Wehrmacht successfully created Muslim legions, but often Muslim soldiers' motivations for enlisting were directed by material and practical concerns as the conditions in the German army were more favourable than their previous ones. Motadel places the Nazis' Islamic policy in context by analysing it as one of the many non-Muslim empires that attempted to use Islam for its own benefits.

Muslims were recruited into the Wehrmacht and the SS. Most of the Muslim soldiers came from the Soviet Union and only a few originated from the Middle East, which further undermines the notion of a strong link between the Arab World and Nazi Germany. Moreover, Motadel presents the mufti of Jerusalem very much as a tool in the hands of Berlin with no real influence in decision-making circles. For instance, when he was sent on a propaganda tour in March-April 1943 in the Balkans, he had very little control over his schedule or even the tour itself; "the SS Head Office planned the tour down to the minutest detail and prepared the mufti" (189). It is striking that the Muslim leaders that Motadel discusses in the Balkans and the Crimea, for instance, have a much stronger agency than al-Husayni as the author demonstrates.

Motadel argues that Nazi Germany's Islam policy was strategic rather than ideological, and that it signified a pragmatic shift on behalf of German officials. By 1942 more Muslim territories were in the hands of the Germans, and simultaneously total mobilization became more important rallying the Muslim world was part of this. The fact that racism was an essential part of Nazi ideology, made it at times difficult to justify the drive for an alliance with the Muslim world, as many Muslim peoples were considered to be racially inferior. According to Motadel, pragmatic strategy trumped ideology at this stage of the war. Even though this line of thought holds, it would have been interesting to see this question of racism and Germany's Islam policy more explicitly explored.

The goal of rallying the Muslim world was twofold: mobilization and control. The Wehrmacht and the SS wanted to recruit Muslim soldiers, and to incite uprisings in British and French Muslim territories. Motadel clearly argues that mostly, Nazi Germany's Islam policy did not succeed. In the Middle East and North Africa the propaganda had a mixed reception, and no major uprisings in Allied territory were incited. In the Balkans and Eastern regions there was some degree of success, and many Muslim soldiers fought in the German army, but they often had lived in horrible conditions and national aspirations also played a role in their decision to enlist, not Islamic propaganda.

According to Motadel, an essential strategic mistake in trying to establish a Muslim alliance that German officials made, was that they saw the Muslim World as one; and they had too much faith in Islamic unity, not taking sufficiently into account tribal, national, family and ethnic ties and defining a Muslim only by his religion. At times, a paradox emerges in the book as Motadel also argues that German propaganda policy was adapted to local conditions resulting in different administration practices: "the Germans encountered very different political and religious landscapes in the diverse war zones and that they adapted their policies and propaganda toward Muslims accordingly." (314) However, this could also be read as another indication that Nazi Germany's Islam policy was complex, not in the least because of its wide and ambitious geographical scope.

An interesting topic that Motadel mentions is the issue of the imam schools. In November 1944 the Wehrmacht and the SS founded an educational religious institute within a German institutional framework for their regimental imams: the SS mullah school in Dresden. Interestingly, this imam school during WWII was established within a European country's institutional framework, which is noteworthy and deserves more extensive exploration. Certainly, the Nazis' imam school emphasized political propaganda against Bolshevism, Britain and Judaism, yet examining the history of Islamic education in Europe and its relationship to the state could provide a historical context that is overlooked in current discussions on the topic.

Overall, the book hints at the relationship Nazis and Islam being the result of practical and strategic considerations, propaganda, and local conditions, not the result of a shared all-surpassing animosity towards Judaism. Moreover, although figures as Hitler and Himmler wished otherwise, Nazi Germany's Islam propaganda did not convince many Muslims. Motadel convincingly demonstrates that the motivations of Muslims who joined the Wehrmacht or the SS were to a great extent directed by national and anti-Bolshevik feelings, material, and familial motivations rather than Islam.

Motadel's excellent analysis of Nazi Germany's engagement with Islam begs the question of other countries' engagement with Islam in the Second World War. He shortly discusses other countries' propaganda, but integrative or comparative analysis of Islamic propaganda by the Soviets, French and British could have greatly enriched this book, or even better, be the topic of a book in its own right. As Motadel states, his book is part of a bigger story on how non-Muslim empires have tried to use Islam for their own benefit. This perspective moves the focus away from discussions (sometimes infused with contemporary political agendas) in which either authors are trying to prove a strong link between Islam and Nazism, or discredit it. Through his perspective, Motadel contextualizes Nazi Germany's relationship with Islam as part of a greater historical narrative on religious propaganda. Analysing other (colonial) nations' relationships with Islam could integrate the story of Nazi Islam policy even more in a greater framework of states' structural use of religious propaganda in violent conflicts.