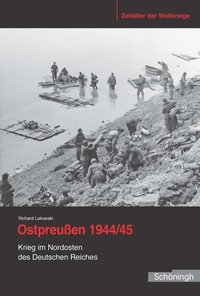 In the current debate about the final year of the Second World War, the military narrative still mainly follows a traditional line: Within the grand strategy of the Allies, Berlin was the final objective, and especially among the ranks of the Red Army, its capture was an idée fixe. But whereas the Allies could think in terms of grand strategy, German defensive conduct was largely limited to small operations that did not venture beyond tactical level. For many soldiers of the Wehrmacht, "Berlin" was far away, and survival was the only imminent concern. To understand the fighting in the different parts of Germany, these notions should be considered, and therefore, Richard Lakowski's local study of the military operations in East Prussia during the final year of the war offers a welcome contribution to the historiography of the final year of the Second World War.

In Ostpreußen 1944/45 Lakowski examines a theatre of war, of which our understanding has so far above all been shaped by former commanders and amateur historians. Research into the fighting in the province effectively ended in 1960, when General Horst Großman published the manuscript prepared by the recently deceased Major Kurt Dieckert, Der Kampf um Ostpreussen. Lakowski has used this half-century gap as an opportunity, as it enabled him to develop original research that is less constrained by some of the current conceptions of the final fighting for Germany. Lakowski provides a fresh view into the battles on one of the most important Nebenfronten (battle grounds that were not part of the main axis to Berlin), by drawing parallels to earlier battles that took place in East Prussia, assessing, for example, how the defensive positions dug during the previous decades, and the traditional fear for the Slavic East, impacted the fighting in 1944-1945.

Importantly, also the troops' isolation during the province's defensive battles, which became even more insular in nature after East Prussia was cut off from the rest of Germany in January 1945, is heeded in this work. Lastly, Lakowski steers away from presenting the standard narrative of a Nazi Party-led descent into violence and chaos, instead opting to stay close to his findings from the military archive in Freiburg. As a result, the section on the evacuation measures on Reichsgebiet restores agency to its multi-faceted nature, particularly addressing the role of the army and the Kriegsmarine. The friction between the evacuation of civilians and the supply of military materiel is fully appreciated, and as such Lakowski reaches conclusions akin those of Heinrich Schwendemann, whose early 2000s research the author - somewhat surprisingly - disregards. Nevertheless, Lakowski correctly places the Wehrmacht in close proximity to the population, drawing attention to its place in the Total War, which "auf seinem Höhepunkt in Ostpreußen auf Heimatboden geführt wurde." (49)

It does, however, go too far to consider this work a study into the interplay between the military and the "verheerende Begleiterscheinungen des (...) totalen Krieges", as the back page suggests. Too much of the recent Anglo-American research into the different facets of Total War has been ignored to maintain this claim, with standard works on Nazi rule in Eastern Germany in 1944-1945 (Alastair Noble), on the Volkssturm (David Yelton), or the role of the Kriegsmarine (Howard Grier) notably absent. The largest oversight of this work is therefore the lack of analysis of the role of the different Party organisations, which, leading up to the final battles, played a significant role in evacuation measures and defensive preparations, thereby profoundly shaping troops' behaviour on the battle field. Moreover, the ruthless calculative behaviour of commanders, who assured the safety of their troops before that of the population, could have been stressed stronger. Although Lakowski at times does discuss some of the different aspects of Total War, and mentions the civilian Trecks, the death march of Jews from Stutthof concentration camp, and the maltreatment of German civilians by Red Army troops, they are not part of the research's larger argument. Yet, by including various aspects of Total War in his work, Lakowski does open the door to a debate in which social and military history are much closer connected than is done so far.

Of course, since Lakowski is first and foremost a military historian, this work's focus on East Prussia's battle fields rather than on the developments in their rear is understandable. Indeed, it is in the analysis of the numerous smaller offensives in the province, many of which up till now have received little to no attention, where this work excels. The examination of the different operations in the province, such as the "Gumbinnen Operation" (the first Soviet incursion into East Prussia in the autumn of 1944), "Unternehmen Tarnkappe" (the Fourth Army's westward thrust during the last week of January 1945), or the subsequent "Schlacht um die Kessel von Heiligenbeil", provides an in-depth view of German military conduct during times of defeat. In early February 1945, with the times of large operations in an all too distant past, the Chef des Oberkommando des Heeres, Generaloberst Heinz Guderian, lamented that, due to the lack of trained staff officers and the fights in tiny villages, the "Studium der Tagesmeldungen der Heeresgruppen mühseliger [war] als die Lösung eines Kreuzworträtsels". Even as East Prussia is littered with hamlets and small villages where the fighting waged with great intensity, Lakowski's clear writing style, combined with more than thirty tables and full colour maps, assures that the work never loses sight of the bigger picture. Moreover, due to his efforts to include Soviet commanders' memoirs, the reader is given a much clearer insight into why the front line moved - or came to a halt - the way it did. Ostpreußen 1944/45 should be appreciated as a necessary military history of a province that saw some of the most severe fighting of the Second World War, and cements Lakowski's reputation as one of the best military historians of the conflict.