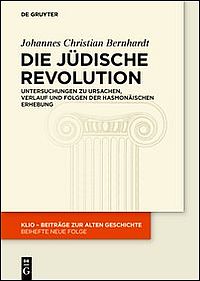 As indicated in the subtitle and spelled out in chapter 1 ("Problemstellung"), this massive work attempts to determine "wie es eigentlich gewesen" in an epoch-making generation of Judean history, 168-140 BCE. That period saw the Judean revolt against the Seleucids, led by the Hasmonean ("Maccabean") clan - a revolt that culminated in the establishment of the Hasmonean state and, in 140, popular recognition of Simon's dynasty (1 Maccabees 14).

Given the fact that the story was recorded in two detailed books (1-2 Maccabees) that survived thanks to their inclusion in the Christian canon, and given the fact that the standard narrative focuses on heroic defenders - as soldiers or martyrs - of religious freedom and as such served as a canonical model for experiencing and describing such clashes for more than two millennia, Bernhardt's questions have often been asked. He is well aware of that and very familiar with relevant scholarly literature (although, unfortunately if understandably, not with that written in modern Hebrew). But his approach is quite innovative.

To understand this, we should note that, whatever the numerous debates and doubts, it is usual to tell this story in some five steps: (a) Already in the 170s BCE, intensified Hellenization in Jerusalem, which led to the foundation of a polis, created tensions between Hellenizing Jews and those more devoted to Jewish traditions. The former were naturally more devoted to the Seleucid king, Antiochus IV Epiphanes, and the polis they founded in Jerusalem was named, accordingly, Antioch-in-Jerusalem. (b) Rome's humiliation of Antiochus in Egypt, in the summer of 168, provided an opportunity for Jews to rebel. (c) That rebellion either responded to, or elicited, Antiochus's edict that prohibited the practice of Judaism and was cruelly enforced (1 Maccabees 1; 2 Maccabees 6-7). (d) The Jews' rebellion was started by one Mattathias, the head of the Hasmonean family; after his death it was led, in turn, by his sons Judas Maccabaeus, Jonathan, and Simon. (e) Judas defeated the Seleucids a few times, Jonathan was recognized by them as a vassal ruler of the Jews (with the title "high priest"), and Simon eventually attained real independence and his dynasty was established. A generation later (beyond the scope of this volume), his grandson would even take the royal crown, thus creating a kingdom that lasted until the Romans annexed it in 63 BCE.

That is, the events began as a combination of a clash of cultures and religious persecution, and turned into a story of power politics. Bernhardt, however, eliminates or marginalizes the first two factors and tells, essentially, a story that is only about power politics. This is done in several steps, which may be compared to those listed above.

After chapters 1-2 set out the problem and his own approach ("kulturwissenschaftlich mit positivistischer Grundierung"), and chapter 3 reviews the relevant ancient sources, Bernhardt devotes chapter 4 to the period that precedes 168. But rather than focusing (as above) on Hellenization in Jerusalem, for Bernhardt the story is one "unter der Überschrift judäischer Sippen- und Machtkämpfe," each clan striving to bolster its power. And it is within that context that Bernhardt sees the establishment of the polis. Namely, rather than a project of the Hellenizers in general, it was a clever move by one of the clans to cement its status by putting itself at the head of a city that the king simply had to support.

The next two chapters come together. First, chapter 5 offers a detailed account of the first years of Antiochus's reign, down to his humiliation by Rome in Egypt in mid-168, emphasizing his need for legitimation (he was his predecessor's brother, not his son!). Bernhardt sees Antiochus's predilection for the cult of Zeus as part of his quest for legitimation, and that sets the stage for his establishment of this cult all around his realm, including in Jerusalem. In chapter 6, correspondingly, on the king's measures in Jerusalem, Bernhardt argues that, from Antiochus's point of view, the establishment of his cult was not meant as a persecution of Judaism: "Da die Anordnung des Königs nicht das Eingreifen in bestehende Kulte beabsichtigte, war sie unter polytheistischen Bedingungen an sich wenig problematisch" (245). True, the ancient Jewish sources, which were not polytheistic, viewed it as very problematic, and claim that it came along with a royal decree that forbade the practice of Judaism and was cruelly enforced - but Bernhardt argues that that is only a retrospective and self-serving myth. We shall return to this below.

Beginning with chapter 7, it is smooth sailing to the end. All we have to do is assume that the Hasmoneans were one of those families seeking power in Jerusalem, and that now they had a chance - supplied by Antiochus's humiliation in Egypt, the delegitimization of the incumbent high priest due to his association with Antiochus's cult, and the Seleucids' internal troubles - to take control. This happens first under Judas (chapter 7) and then under Jonathan and Simon (chapter 8). Q.E.D.

The volume, which began as a Freiburg dissertation, is quite readable, its prose quite lively. Its orientation around power is especially underpinned by a pronounced cynicism about other possible values, such as religion or family. Note, for example, Bernhardt's cynical arguments that Antiochus's Kulteingriffe were fortuitous for Judas, because "sie öffneten Judas die zuvor nicht absehbare Möglichkeit, sich in der theologisch aufgeladenen Politik Judäas die Rettung des Kultes auf die Fahnen zu schreiben" (327); that since we hear of no effort by Jonathan to rescue his brother John, who had been kidnapped and eventually killed after Jonathan sent him out on a mission (1 Maccabees 9), we should realize that Jonathan "ihn schlicht in seinen Untergang geschickt hat" (338); and that, in turn, when Jonathan was captured by Trypho in 144 BCE (1 Maccabees 12) Simon took advantage of the situation to execute a "Putsch" and take over the high priesthood, however much the pro-Simonide author of 1 Maccabees attempted to hide that fact (383).

This is a very detailed and up-to-date volume, and to a significant extent can serve as a useful guide to the period, whatever one thinks of its assumptions, methods, and conclusions. About those, however, there is much to debate. In the limited space available here I will focus on two central cases that illustrate a fundamental methodological issue: Bernhardt assumes that the more something works as literature, the less likely it is to be true, historically. Thus, in §7.1 a prominent argument among those he mobilizes against the historical truth of 1 Maccabees 2's long account of Mattathias is the that fact that it is "mit Abstand" the most literary chapter in the book (276), and in §6.5 his arguments against the thesis that Antiochus forbade the practice of Judaism include, prominently, the fact that the martyrological narratives in 2 Maccabees 6-7, which illustrate the severity of Antiochus's persecution, are "literarische Gestaltungen" (256-259). Rather, both points - Mattathias's initiation of the rebellion and Antiochus's persecution of Judaism - are to be understood, he argues, only, as part of the Hasmoneans' Gründungsmythos: Simon and his sons needed (a) to point to a direct ancestor (Simon's father) who legitimated their succession to the throne (1 Maccabees 2:65; 14:29) and (b) to explain to their subjects just what was so terrible about Seleucid rule, and these stories did the requisite tricks.

True, all will agree that it is important for historians to recognize that their sources may be good literature and might serve their authors' interests. Readers of Bernhardt's volume might ask themselves here and there, however, what justifies the rule that such stories should be read only as literature and/or as evidence for the authors' interests; whether the rule is applied consistently in this book; and what would be left of this book, or of any work on history, if it were.

Obviously, application of the rule is most warranted when there are positive reasons to doubt the historical truth of some claim that is made in good literary form and/or suits its author's interest. In the cases mentioned above and many others, Bernhardt is aware of that, just as he is willing to admit the veracity of a literary narrative when it is supported by epigraphic evidence or fits what seems to be an appropriate model. Moreover, he is not as doctrinaire as he sometimes sounds; he too, for example, is willing to admit that there might have been incidents that correspond to religious persecution (262-263). Thus, to some extent this argument is like one about whether a cup is half empty or half full.

So it happens that, despite numerous details along the way that will interest or even fascinate (and at times infuriate) specialists, the big picture Bernhardt presents remains conservative, and is convincing: there was a Judean rebellion against Antiochus's rule after Rome humiliated him in 168; the rebellion did succeed in overcoming the Seleucids and setting up a Simonide Hasmonean state in its stead; that state did put out a dynastic history, 1 Maccabees, that was meant to mobilize popular Judean support for the dynasty, and requires, therefore, careful and critical reading in order to supply "what really happened"; just as 2 Maccabees had a religious agenda that requires proper interpretation and, at times, discounting. That Bernhardt's critical, suspicious, and detailed reading of the sources, while relating to much scholarly literature that focuses on cultural and religious history, focuses instead on power politics, makes this volume a refreshing addition to the bookshelf.