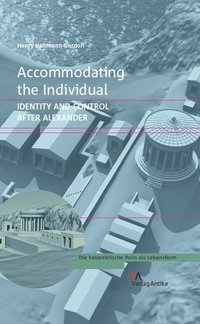 I find it difficult to summarise exactly what this book is doing. This is in part, I think, because I find its theoretical framework and language somewhat dense (which reflects my own weaknesses, I suspect). But it is also, in part, because the author is attempting to do something rather ambitious (which I think he does quite successfully). Perhaps a few quotes will set out some of what this book hopes to achieve. In terms of methodology, it aims "to bring contingency and control into focus as relevant aspects of socio-political and cultural history...[by]...applying network theory at the level of discourse to assess and compare imaginary societies" (417-18). Heitmann-Gordon applies research on "norms and identity to the study of socio-political power in the Diadoch period...to combine concepts of identity and power by means of a reflected conception of 'network'" (35); his argument here is characterised by "its nuanced interest in the cognitive web that underpinned the realities of socio-political life in the Diadoch period" (36).

Looming large throughout this ambitious study is Network Theory, specifically its application to questions of power and identity. Heitmann-Gordon refreshingly eschews the agency-heavy biographical focus of studies of the big powers - the 'Big Men' - of the early Hellenistic period and examines instead how early Hellenistic society responded to the rise of these powerful individuals on a societal level. He approaches the period neither from a purely top-down perspective (how did the ruler achieve control) nor a bottom-up one (how did subjects accommodate the ruler), and therein lies the strength and originality of this book.

This book (2017) developed out of the author's PhD (2016), and it bears the hallmarks of a lightly-revised PhD dissertation - a reference to "in this thesis" on page 421 appears to have missed the author's eye. Its 419 pages make for a long read and could have been trimmed down quite substantially. The book opens with two long introductory chapters outlining the argument and focus of the book, including an overview of scholarship and a discussion of the book's theoretical foundations. These are long, dense methodological outlines and while they offer useful overviews of modern scholarship, theoretical models (networks, power-relations, Actor-Network Theory, identity and legitimacy), and their application to the fields of Classical studies and ancient history, these chapters should have been edited quite substantially. An 80-page introduction is too much, no matter how theoretically informed the book may be; the reader is swamped before the actual analysis begins.

The core of the book consists of four chapters, some quite long: Theophrastus' Characters (85-179), Xenophon's Cyropaedia (181-303), a short analysis of royal philoi (305-339), and the city-state of Rhodes, specifically the siege of 305/4 and the construction of the Colossus in the late 280s (341-409). The connections between these diverse chapters are not immediately obvious - and I was initially sceptical as to their coherence - but Heitmann-Gordon's analysis hangs together surprisingly well because it blends literary sources, socio-cultural institutions, Hellenistic history, and epigraphic sources. It traces the growth of inter-locking networks - social, economic, literary, political, cultural, etc. - at both macro (external relations) and micro (internal) levels and examines the development of agency - elite and non-elite, individual and communal - within early Hellenistic society. Heitmann-Gordon benefits here from his methodology and theoretical approach which allow him to piece together the thematic unity underlying these different selections and draw some very interesting and new observations on the development of early Hellenistic society, offering as he puts it "fresh engagements with texts that have been repeatedly squeezed for most of the 'factual' information they can yield" (417).

Chapter 3 traces in Theophrastus' Characters the tension between the collectivised polis and its individual members - its "main interest is in the polis as a constructed community of citizens" (85). Theophrastus' Characters is indeed a good source for thinking about networks of control between individual and collective in late fourth-century Athens and Heitmann-Gordon uses the text to argue for a "lived discursive reality" that is "rendered as snapshots of interaction...the bones of a theory of society" (176). Heitmann-Gordon fruitfully uses the text to consider what it is that makes someone Athenian, how that collective identity is formed, debated, and lived at a period of intense socio-political stress due to both external (wars of the Successors) and internal (civic stasis) factors - in short, "a socio-political discourse under stress." I enjoyed this chapter, but there is a tendency towards jargon that I found tiring. Consider Heitmann-Gordon's discussion of the creation of collectives from groups of individuals: "These collectives become institutionally reified via political interests and directives, and thereby take clearly identifiable form for the individual. The structure of these figurations becomes normative and their dynamics are collectively obscured as a means of reducing perceived contingency" (87). Over the course of a 100-page long chapter this style of writing can become quite draining.

Chapter 4 turns to Xenophon's Cyropaedia as a parallel to the "network construction and power dynamics" (181) seen in early Hellenistic Athens. In the absence of literary sources discussing the development and organisation of the early Hellenistic court, Heitmann-Gordon turns to the Cyropaedia as a model narrative, a paradigm for "[looking] at the literary sources relating to the emergent court societies of the Diadoch period with an eye towards their potential societal impact as story-telling in their potential lived reality" (131). One might question the degree to which an early fourth-century fictionalised historical biography of a sixth-century Persian monarch offers a paradigm for Hellenistic kingship, but earlier scholars have examined the relationship between the Cyropaedia and Hellenistic kingship (Faber, AJP 100, 1979), so Heitmann-Gordon is not entirely in terra incognita. Heitmann-Gordon's wide-ranging analysis focuses on concepts of kingship and friendship, individual and collective, networks, contingency, philia, religion, and economics, which allows him to draw similarities between the court society of the Cyropaedia and the social-society of the Characters. He argues that court society is a closed social system and that network theory allows us to explore how individual and collective identities are constructed at court. Heitmann-Gordon has a strong interest in the power of story-telling to "enable the social network of the court to persist through change, thus allowing for the continuous creation of collective agency and at the same time naturalising the court as a social system" (186-7). A very useful comparison of the Cyropaedia with Hellenistic court society (267-301) examines agency, philia and communication, communal feasting, royal self-representation, gift-giving, the royal body, knowledge and communication at court, the idea of the 'mender king', restoration and healing, not to mention an illuminating reading of letters, dreams, portents, and omens in early Hellenistic historiography and their literary function as showing changing agency and the creation of new "collectivised selfs."

Chapter 5 examines the issue of control between court and city. It "investigates how the interactive 'biographies' of intermediary individuals might be understood to have functioned within the web of discourse between court and city as negotiations of control between these larger collective narratives of world organisation" (305). Drawing on Yuri Lotman's concept of the semiosphere, Heitmann-Gordon explores court and polis "as semi-entangled systems of meaning in the contested narrative nexus." This chapter is short - the shortest of all in the book - but it provides illuminating discussions of the royal hetairoi and philoi, their agency between city and king, and the social function of the monstrous imagery often used to describe them, what Heitmann-Gordon neatly terms "a discourse of monstrosity and otherness."

Chapter 6 offers a study of Rhodian identity in terms of networks and network analysis, tracing societal responses to individual agency, most notably Demetrius Poliorcetes' siege of 305/4. Heitmann-Gordon begins by offering useful background on Rhodian colonisation, mythology, and identity, before examining the synoecism of 408/7 and Hecatomnid rule in the fourth century. He argues for a pan-Rhodian identity from the Archaic period onwards that contributed to later Rhodian contingency-control on an inter-polis level. Importantly, Heitmann-Gordon identifies Alexander's campaign as "the trigger that allowed for the unification of the Rhodian socio-political network and resulted in the self-confident inter-collective agency it exhibited in the late fourth and third century BC" (407-8). The main focus of the chapter is on two events. The discussion of the siege of 305/4 examines Rhodian and Antigonid contingency as well as the various networks of collective agency that each party could mobilise - in Rhodes' case on both macro (inter-state) and micro (intra-polis) levels. The discussion of the creation of the Colossus of Rhodes details how Rhodes turned the detritus of the Antigonid siege into a monument celebrating Rhodian glory. Heitmann-Gordon raises some astute points regarding the royal-connotations of the solar imagery, Doric descent claims (especially Heracles), claims to rule land and sea, and the reference of freedom detailed in the Colossus' dedicatory epigram - all barbed comments designed to undermine Antigonid royal propaganda and advertise the growth of Rhodian hegemony in the third century. The Colossus acted as "part of a larger mnemotype of spatially correlated Rhodian mytho-history...an amplifier and embodiment of the benevolent inter-state policy pursued by the Rhodian polity in the third century BC" (405-6).

The volume is rounded off with a useful appendix on terminology, a full bibliography, and a solid though somewhat sparse index. It is very well-written and produced with very few errors, either typos or formatting. Overall, this is a strong and insightful addition to the bibliography on early Hellenistic history. Heitmann-Gordon's chapter selection is somewhat surprising initially, but the diversity of topics allows him to craft a genuinely interesting and illuminating analysis of the development of the early Hellenistic period through the prism of network theory. And while I found the language difficult at times - ideas and arguments could often have been explained more clearly in a more straight-forward manner - I would recommend it to scholars of early Hellenistic history as an original and thought-provoking contribution to our understanding of this period.