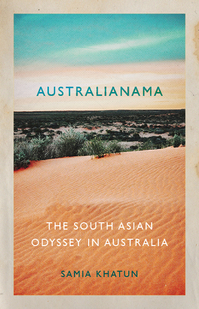 Samia Khatun's brilliant first book begins with the collapse of her world. Her mother, Eshrat, a first-generation immigrant to Australia from Bangladesh, is hospitalized in a psychiatry ward in Sydney. Eshrat's room-mate is an Australian soldier returned from Afghanistan, a woman who imagines herself to be trapped at the battlefront. As Khatun struggles to convince doctors that her Muslim mother and a uniformed soldier should not be "imprisoned overnight" together, she realizes (p. xvii): "Western states cannot bomb, exploit, drone, invade and kill South Asians and have us as part of their citizenry at the same time. The migrant story I had inhabited for much of my life buckled, and eventually collapsed." Australianama is the riveting account of what Khatun's subsequent search for a new story meant for her understanding of the discipline of history. As such, it raises difficult questions which go to the very heart of what it means to write history in a globalized world - questions too often only addressed in general terms in global history's "what is?" literature.

At one level, Australianama is an intellectual history of a text. As her migrant story collapses in 2009, Khatun reads a book about Australian history. In it she finds a photo of what seems to be a Bengali Quran, preserved in a tiny mosque in Broken Hill, some 1000 kilometres inland from Sydney. When Khatun travels there, she discovers that the text is in fact a 500-page book of Bengali Sufi poetry, the Kasasol Ambia (Stories of the Prophets), itself a compendium of eight volumes published in Calcutta between 1861 and 1895. Which leads to the question (3): "How, then, did a book published in Bengal find its way to an inland Australian mining town?" In chapter 2, Khatun begins to suggest some plausible answers: perhaps it was brought by a spiritual guide, or a lascar; perhaps by a lover, a trader, hawker, or a female migrant. In this first iteration, Khatun layers each hypothesis onto a particular tale from the Kasasol Ambia; in six further chapters, she explores the migrant histories of some of these actors in more detail. As a consequence, Australianama itself takes on the form of an epic narrative, literally a "Book of Australia," populated with a rich list of individual characters who emerge from Khatun's extraordinary archival excavations.

But Australianama goes further. It is also a "methodological contribution" to historians' understanding of South Asian and Aboriginal knowledge systems. Khatun proposes (8) "that texts belonging to South Asian historiographical traditions are underpinned by, and sometimes theorise, knowledge relations that we can step into today to create true narratives about the past." On its own, this would make the book required reading for global historians: Khatun's "we" is unambiguously not the Caucasian male scholar - pace most of the authors of the other books reviewed in this special issue, and the majority of their reviewers (myself included) - who sees fit to define what global history "is". Her need for "true narratives" - in the plural - comes from a place more visceral than the lecture halls of Zurich (or Munich, Oxford, Berlin, Konstanz, etc.), and the "we" of those institutions would do well not to undermine that need by categorizing Australianama into the genre of "personal," "autobiographical," or (with the provocative final chapter in mind) "dream-like" history-writing.

Indeed, the methodologies employed in Australianama are exhilarating in their audacity, and bring to mind Minoru Hokari's 2004 Radikaru Ōraru Hisutorii (translated posthumously in 2011 as Gurindji Journey: A Japanese Historian in the Outback; Khatun acknowledges that Hokari "kept appearing in my dreams even though I never met him"). In chapter 3, Khatun defies the reader's expectations that she may uncritically reify "South Asian historiographical traditions" by carefully deconstructing the various autobiographical narratives of Khawajah Muhammed Bux, a lascar, trader and consummate storyteller. Bux's recollections, Khatun notes, "contain no traces of an Aboriginal presence, thereby systematically reproducing settler myths of emptiness" (80). This is but one example of "the complicity of elite South Asians in buttressing the most brutal regimes of contemporary violence across the Indian Ocean arena" (87). The challenge is therefore to counter this Aboriginal erasure from stories of South Asian migrants to Australia, a challenge which Khatun takes on by writing a juxtapositional history of "tracks" (chapter 4, published in an earlier form in the interdisciplinary journal, Transfers); and which she then then extends in an extraordinary chapter entitled "The Book of Sand". "Aboriginal-language stories," she argues, "can reveal glimpses of the epistemological ground on which Aboriginal people narrated the past" (127). And so, through present-day Aboriginal guides, Khatun makes the sand her archive and offers a radical new reading of a particular Aboriginal-South Asian encounter which occurred in 1895. Meanwhile, in Australianama's penultimate chapter ("The Book of Marriage"), Khatun examines a "brideprice" story from 1904 in order to challenge a narrative that features "at the centre of many histories of Muslim women in Australia" (142). She does so by countering colonial epistemologies of South Asian women and instead constructing what she calls multivocal "marriage archives" - that is, "a new framework to house feminist histories of women across the Indian Ocean" (25).

Like Hokari's Gurindji Journey, Khatun's Australianama may provoke its readership. Two months on from my first reading, I still am unsure what to make of its final chapter, beautifully crafted though it is. I also feel unsure about the book's subtitle, which seems to compress the complexity of Khatun's storytelling into a narrative frame - the Odyssey - so redolent of European storytelling traditions that it runs the danger of undermining her search for "another story to inhabit" (p. xviii). And yet, in her concluding insistence on hearing history - and there is a wonderful twist here which I shall not spoil - Samia Khatun's scholarship speaks to a wider body of new literature which engages with indigenous sources in ground-breaking ways (see, for example, Noelani Arista's insistence, in her recent The Kingdom and the Republic [2019], on historians learning the art of ear-witnessing in their readings of Native Hawaiian sources). As Khatun argues, this is not just a case of using non-European languages (in her case, particularly non-English sources) in order to append hitherto unknown stories to established accounts of, say, the birth of the modern world. Rather (4), "non-English-language texts render visible historical storytelling strategies and larger architectures of knowledge that we can use to structure accounts of the past. They have the capacity to radically change the routes readers use to imaginatively travel to the past." Thus, as a step towards pluralizing global history, perhaps scholars - and funders - in the Global North could do more to encourage the writing of global histories through indigenous historical forms and languages; and perhaps, in our imaginative travel to the past, we could also begin to answer the question, "what is global history?" by directing our students to texts such as Australianama.