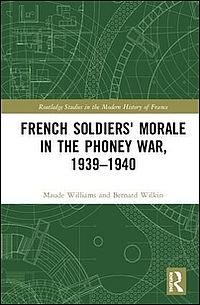 The book French Soldiers' Morale in the Phoney War, 1939-1940, written by Maude Williams and Bernard Wilkin, proves that the French defeat of 1940 did not originate in a lack of morale in the French army. Using postal control reports, front newspapers, memoirs and administrative archives, the authors show the difficulty of analyzing the morale of the French army during the "drôle de guerre". The authors' approach contributes to the recent renewal of the historiography of the "drôle de guerre" and the French campaign [1], successfully abandoning the overdrawn Franco-centric tilt of the preceding studies on the morale of the French army. Composed of five chapters, the book contains 15 illustrations and 2 tables, a bibliography, a chronology and an index.

The first chapter looks at the organization and daily life of the French army on the German border from September 1939 to May 1940. After studying the French order of battle on the Maginot Line, the authors look at the soldiers' difficult living conditions, covering food, alcohol, clothing, stewardship and cantonments. The second chapter describes how the difficult living conditions affected soldiers' morale. The mobilization re-invoked the specter of the First World War in soldiers' minds. From October 1939 to February 1940, despite its desire to fight for peace, the French army experienced a form of "winter depression", which was due to routine, inaction and the difficulty of mainly urban French soldiers to adjust to military and rural life. With the end of February 1940, and the return of spring, the army's morale lifted up. The third chapter explains the methods used by the military authorities to fight the "cafard", a slang term for "blues". Soldiers' messes, theatre shows, cinema, sports, and visits to the Maginot Line were all activities designed to keep soldiers occupied. Similarly, front newspapers appeared in the different units at the front. All these activities, created to maintain good spirits amongst soldiers, were a legacy of the First World War. The fourth chapter explores the impact of communist and German propaganda on the morale of the French army. By placing the "drôle de guerre" in the context of modernity, the authors show how the methods implemented to demoralize the French army, by radio or banners, resulted in mediocre outcomes. Just as the German propaganda, the propaganda carried out by the Communists also remained unsuccessful. The fifth chapter seeks to show the interaction and coexistence at the front between French and British soldiers. First, it presents the composition of the British Expeditionary Force. Then it discusses the relationships and representations of British soldiers among French soldiers, showing that there was no Anglophobic sentiment among the French throughout the period, despite some entrenched stereotypes and even a certain mistrust.

Maude Williams and Bernard Wilkin's book is a gateway to French soldiers' daily life during wartime. The battle itself only appears in the epilogue and is little (but relevantly) commented upon, which makes it possible to focus on the period from September 1939 to 10 May 1940, and to give it a historiographical weight now detached from the battle. This study on morale, while adding to previous research in the first three chapters [2], reintroduces the international aspect of the "drôle de guerre" in its last two chapters. British soldiers and German propaganda give the study an interesting and innovative European flair, going beyond a French-centric framework in which most studies on the subject are usually confined.

However, some nuances can be added to this work. The main source used, the reports of the "contrôle postal", criticized in the introduction, could have introduced a central theme into a study on the morale of the French army: the issue of authority between French soldiers and officers during the period. The question of the authority in the French army seems to be one of the key elements to an analysis of soldiers' morale, at a time when its legitimacy was no longer created in the heat of battle, even though its coercive power weighed on soldiers' morale through discipline and censorship. Oscillating between an acceptance of this authority justified by war, the rejection of superfluous discipline in the absence of combat and a re-composition of the relationships between soldiers and officers, the question of military authority seems central to the understanding of the morale of French soldiers.

It is also possible to discuss the use of the term "phoney war" instead of "drôle de guerre". The introduction of a European dimension must not, however, deny national particularities: the "drôle de guerre" refers to a French particularity, that of a mass mobilization at the German border. Underlining the French specificity here allows us to question the perceptions soldiers had of the war in which they were engaged and which they barely understood.

Maude Williams and Bernard Wilkin's book opens up a field of research that has remained focused on national perspectives for too long to a European dimension, and provides an interesting, but sometimes shy, fresh look at the "drôle de guerre".