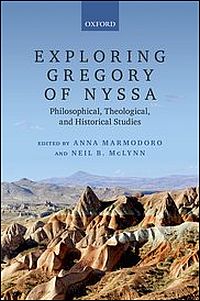 This new volume, edited by a metaphysicist (Marmodoro) and a late antique Roman historian (McLynn), offers a collection of essays linked by their common subject, the theologian and bishop Gregory of Nyssa (ca. 335-395 C.E.). Its uneven feel is the consequence of its origin: each chapter began its life as a presentation made to a serialized seminar at the University of Oxford, one in which each contributor was not necessarily aware of the others' work. Indeed, the loose structure of the volume highlights both the virtues and the vices of employing authorial identity (especially one whose biographical and political context is not as well-known as that of his many of his contemporaries) as the organizational theme: yes, readers get a sense for the breadth of Nyssen's writings and the avenues of inquiry that scholars have explored, but few if any intellectual souvenirs, so to speak, can be taken away from here because the chapters' respective arguments feel so compartmentalized. The absence of volume-wide cohesion, of course, cannot be held against the contributors; it is the editors who shied away from giving the volume what it really needs, namely, "any attempt at synthesis" (2) and "a conclusion to the volume" (6). What readers will find here is an assortment of arguments pertaining to Nyssen, some of which overlap with other arguments in the volume, some of which stand alone. Space prohibits any detailed analysis of all the arguments, and so here I provide a brief overview of each one.

John McGuckin surveys Nyssen's life and writings, providing an important foundation for the other chapters. Particularly illuminating is the brief discussion modern scholars' reluctance to approach Nyssen's corpus; most his writings went untranslated due to the poor critical editions published before Jaeger's Gregori Nysseni Opera, and from the Byzantine period onward, his intellectual legacy was suspected of Origenist tendencies. At any rate, McGuckin provides crucial orientation toward Nyssen's life and legacy as an ascetic, exegete, and bishop.

Neil McLynn's chapter spotlights the oft-neglected relationship between Nyssen and Gregory of Nazianzus. The two Gregories, McLynn argues, exploited each other and their relationship for professional purposes. In fact, Nazianzen even attempted to draft off of Nyssen's ascent to new heights within the international society of bishops during the mid-380s.

Susanna Elm's piece encourages readers to approach the two sections of Nyssen's famous Life of Moses - the narrative (historia) and the contemplative discussion of the narrative's beauty (theoria) - in new ways. She argues that, despite the historia's brevity relative to the theoria, Nyssen intended for Christian elites reflect on the historia's presentation of Moses (and his garb) as a model of how civilians, not just clergy and ascetics, could attain virtue.

Employing essentialist understandings of "Platonist" and "Christian" (the latter determined by whether or not an author holds up the Bible as the "sovereign text at all times"; p.74), Mark Edwards argues that Gregory of Nyssa can indeed be classified a Platonist (unlike his intellectual forebear, Origen of Alexandria) on the basis of an examination of his Commentary on the Song of Songs. Whether such a conclusion is groundbreaking or even interesting, I will let readers decide.

Christopher Beeley argues that Nyssen held a systematically consistent Christology and Christological exegesis than previous scholarship has recognized. Throughout generically and chronologically diverse texts, such as Contra Eunomium, anti-Apollinarian tractates, homilies on the Song of Songs, the Life of Moses, and the Catechetical Oration, readers will encounter the same pre-resurrection dualist scheme in which divinity and humanity are distinct agents and exegetical referents, and post-resurrection scheme in which humanity and divinity are the one agent of reference.

The next three chapters comprise a thematic unit in which each piece explores Nyssen's thought on the relationship between body and soul. Ilaria Ramelli tours early Christian expositions on the soul and uses Nyssen's De anima et resurrection (and a few other texts) as a touchstone to which she frequently returns. She identifies Nyssen's influences and innovations with respect to theological anthropology and the resurrection-restoration, as well as the influence that Nyssen had on later Christian thinkers. For his part, and with more focus, Johannes Zachhuber argues against a strictly Platonist reading of Nyssen's psychology, as if one could analyze the soul's nature and habits without considering its relationship to the body. Indeed, by Zachhuber's reading, the soul's connection to the body in some part determined its function as a dynamis, a "power" or "energy," that animated the body. Morwenna Ludlow tracks the metaphors and images that Nyssen employs in three lesser known texts - De professione Christiana, De perfectione, and De instituto Christiano - to show how his notion of spiritual formation and Christian perfection, seen as the result of divine agency working with human receptivity, are built atop a theological anthropology structured on an intimate marriage of soul and body that Christ himself revealed.

In another chapter pertaining to spiritual formation and theological anthropology Sophie Cartwright examines Nyssen's De opificio hominis and De anima et resurrection on the complicated relationship between the freedom to choose virtue or vice (self-determination or freedom, as she terms it) and an embodied vulnerability that requires assistance to exert its dominance over creation. She argues that an acknowledgment of human weakness is the first step towards human beings achieving self-determination.

The final two chapters comprise yet another thematic unit dealing with Nyssen's Trinitarian theology as expressed in the Ad Ablabium. Andrew Radde-Gallwitz posits that Nyssen's basis for Trinitarian unity is activity rather than nature. Indeed, the single quantitative nature of God articulates into three persons by distinctive operation, or activity; the Trinitarian God is thus simultaneously one and many, and thus he refutes any tritheist confession. Anna Marmodoro scrutinizes Nyssen's Trinitarian theology within the context of the history of metaphysics by identifying points of overlap between Nyssen and his predecessors, Plato and Aristotle, as well as points of departure. She argues that, ultimately, theologizing the triune God was a philosophical exercise for Nyssen, even though, to my mind, such a distinction would have surely been meaningless to Nyssen and other patristic theologians, for whom the modern categories of theology, religion, or philosophy did not apply in the late antique context.

This volume houses several strong individual pieces (particularly those by McLynn, Elm, Beeley, Zachhuber, Ludlow, and Radde-Gallwitz), but the book's lack of thematic consistency or overarching argument (which an edited volume can certainly make, its multiple authors notwithstanding) is disappointing. Additionally, infelicities plague the volume. Typographical errors abound and there are too many to list, but among the more irritating are p. 11's "Nektarios" (the successor to Gregory of Nazianzus at Constantinople) used for Gregory of Nyssa's brother, Naucratius; p. 23's "Theodore Mopsuestia" instead of Theodore of Mopsuestia; p. 71's "παιδείᾶ" instead of παιδεία; the frequent mis-accentuation of αὐτεξουσία as "αὐτεξούσια" in Chapter 9. Additionally, several authors, notably McGuckin and Ramelli, engage in the frustrating (to readers) practice of citing their previously published work rather than those primary sources that are directly pertinent to their argument. The volume would have also benefitted from authors using the same titles for each of Nyssen's texts, and a standardized way of referring to them. In the end, I would not recommend that students or scholars purchase this book. Surely several libraries around the world will acquire it, and so let me advise that readers simply request the piece they want to read through Interlibrary Loan.