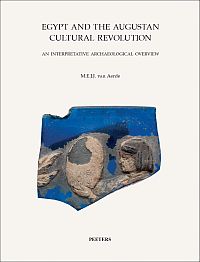 Responding to many years of scholarship on Egyptian material in Roman Italy, M.E.J.J. van Aerde's book challenges several established assumptions and suggests a new way forward. Van Aerde argues that Egyptian imagery was both more flexible and more integrally incorporated into Roman art of the Augustan period than has been recognized so far. This was no marginal phenomenon, she claims, nor an "exotic" interloper, but a central element of Augustan culture. And like other elements of Augustan culture, Egyptian imagery was fundamentally polysemous. Egyptian material in Roman Italy did not refer to one monolithic concept, van Aerde emphasizes, but to a variety of context-dependent ones. This very flexibility, long recognized as a hallmark of Augustan culture [1], applies just as much to the Egyptian as the non-Egyptian material in Augustan Rome. In addition to this nuanced argumentation, the book is useful as an overview of Egyptian monuments in the city of Rome under Augustus, otherwise lacking in the scholarship. Especially useful in this respect is its inclusion of several obscure or even unpublished objects (fresco and glass fragments).

The study begins with two short chapters introducing the previous scholarship (1-10) and the present work's theoretical basis (11-26) before transisting to the core of the work, a series of case studies (27-166). A short conclusion (167-173) and appendix of Augustan chronology (174-175) follow. The core section examines Egyptian material in Augustan Rome grouped into four categories: two Augustan buildings on the Palatine; Augustan coins and monuments elsewhere in the city; three buildings belonging to the Augustan elite; and a selection of precious items including cameo glass, two gems, and a gold ring. While some of these monuments and objects come as no surprise in a study of this topic - such as the House of Augustus or the Pyramid of Caius Cestius - others are a less common addition, such as the Ara Pacis, Forum of Augustus, and cameo glass. This selection, as indeed van Aerde's project as a whole, can be seen in line with the recent movement to take a more holistic view of Egyptian material within the canon of Roman art, rather than artificially isolating the Egyptian elements. [2]

Chapter 1 lays out both the history of work on this topic and the theses noted above. One aspect of the thesis introduced here deserves particular attention. Van Aerde notes that the use of Egyptian imagery in Augustan Rome began as a visual tool of the princeps, subsequently developed into a "language of luxury" for the elite, and then broadened in popularity among all social strata (4). This mechanism is, van Aerde argues, exactly parallel to the cultural "revolution" occurring at the end of the Republic and the early Augustan period: the elite classes were undergoing changes, expanding in certain ways - in short, becoming cosmopolitan, as seen too in the visual culture drawing on Greek as well as Egyptian traditions (5-6). This at first alarmingly top-down theory derives from van Aerde's observation that the contexts and object genres of Egyptian imagery in Augustan Rome shift over time, suggesting that the patrons change over time too - from the princeps to the inner circle and finally to the rest of the populous (8). While I agree that this trend generally obtains, I believe it was primarily motivated not by "propaganda" or displays of allegiance as argued by van Aerde, but rather by a passion for this new artistic material introduced by the princeps after his conquest. [3]

Chapter 2 situates the methodology of the work in terms of five highly influential methodologies in the field of Roman art: Kopienkritik, Tonio Hölscher's semantics of images, entanglement, objects-in-motion theory, and cultural biography. Van Aerde's overview and critique of all of these is skilled, but to my mind does not shed much light on the project at hand. Perhaps it reflects the origin of the book as a dissertation, in which situating the work methodologically was central.

Chapter 3, the heart of the book, argues for the integration and flexibility of Egyptian imagery in Rome via a series of case studies. First we turn to the Palatine, where the Upper Cubiculum frescoes in the House of Augustus set the tone. Van Aerde argues that the "highly stylized" Egyptian motifs here are not meant to broadcast an Egyptian message, but point to the Roman use of Hellenistic decorative motifs, including those from Hellenistic Alexandria (35, 44-45). Here van Aerde makes an important point, since Egyptian imagery in Hellenistic art has not yet been sufficiently recognized to have inspired Roman art with Egyptian motifs. At the same time, the argument here is not supported by specific examples or pictures of Hellenistic comparanda, and I am unsure what the term "uraeus motif" refers to in either the frescoes or the Hellenistic corpus (35; also 116). Later too, I could not find the lotus and "uraeus pitcher" borders among what I recognized to be egg and dart and bead and reel borders from the Forum of Augustus. Nonetheless, van Aerde succeeds in throwing into question the simplistic interpretation of Egyptian imagery as a reference to Octavian's conquest, instead encouraging us to think about artistic and cultural catalysts.

The flexibility and pervasiveness of Egyptian imagery on the Palatine is also seen in the black marble Danaids and mysterious Aswan granite blocks. Including these monuments represents an unusual and laudable decision to show the breadth of Egyptian imagery in Rome. Meanwhile, the Ara Pacis and architectural decoration in the Forum of Augustus serve to show that Egyptian motifs could be so integrally incorporated into Roman monuments that they were nearly invisible to viewers. Here the Egyptian motifs, van Aerde posits, refer not to Egypt or the conquest, but to Augustus himself, or to Rome (103). While the idea is intriguing, I do not see that it is backed up by the analysis presented. Indeed, separating out the motifs' intended referents would seem not only difficult but even contrary to the argument about flexible meaning-making.

Unmistakably Egyptian are of course the obelisks in Rome, which van Aerde emphatically situates within the cityscape: they are not simply foreign or "exiled" objects, as they have often been treated, but objects whose significance evolved as they were recontextualized. She is quite right to stress this point, even if other studies of obelisks seem to me to cover similar ground. [4] In any case, including them here is necessary for a holistic overview of Egyptian monuments in Augustan Rome.

Moving to residential contexts, van Aerde proposes that the frescoes in the Villa Farnesina and the sculpture in the Gardens of Maecenas reflect how elite Romans "expressed their allegiance to Augustus' rule" by adopting his imagery (108). This seems inconsistent with the greater argument stressing flexibility in meaning-making, which should allow for the notion of patrons displaying Egyptian objects without intending to express allegiance. Indeed, van Aerde considers the Apis bull statue perhaps from the Gardens of Maecenas to be flexible in its potentially religious or decorative significance (126). One valuable although tangential point that piqued my interest concerns the blue panel adorned with a white figure in the Farnesina frescoes, which Van Aerde suggests may imitate cameo glass technique (112, 138). If so, it is not only another testament to the cross-pollination among media in elite Roman art collections at the time, but may also require redating the paintings to within the window proposed for cameo glass (15 BC-AD 25) - at least ten years later than the currently generally accepted date.

A section on cameo glass, gems, and jewelry concludes the chapter. The cameo study draws on van Aerde's work with several British Museum pieces, itself a very thorough and necessary study on an undervalued genre. [5] The book contextualizes these cameo fragments bearing Egyptian motifs, noting that the Egyptian imagery is mixed with Hellenistic imagery and executed in a quintessentially Augustan artistic technique. This melange is not only typical of Augustan culture, van Aerde writes, but asks to be valued as an integral whole rather than for just one of its characteristics. As the leitmotif of the book, this proposal is perhaps the most convincing part of van Aerde's project. If at times redundant or unclear, the book more than compensates with its very modern and worthwhile exposé of the polysemy of Egyptian imagery in Augustan Rome.

[2] Strongly argued for the Beneventum sanctuary by K. Bülow Clausen: Domitian between Isis and Minerva: the dialogue between the "Egyptian" and "Graeco-Roman" aspects of the sanctuary of Isis at Beneventum, in: Egyptian Gods in the Hellenistic and Roman Mediterranean. Image and Reality between Local and Global, ed. by M. J. Versluys / L. Bricault, Caltanissetta 2012, 93-122.

[3] S. Pearson: The Triumph and Trade of Egyptian Objects in Rome. Collecting Art in the Ancient Mediterranean, Berlin 2021.