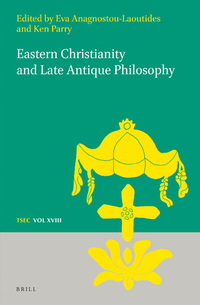 Both Eastern Christianity and late antique philosophy have often suffered from a bad press when compared with earlier classical thought. The present volume, consisting of fourteen articles by different authors, challenges this negative assessment. After an introductory section on "Identity and Terminology", the subsequent twelve articles are grouped in four further divisions, proceeding from "Greek Christian Thought" through two contributions on "Proclus the Neoplatonist" to "Pagans and Christians in Byzantium" and "Syriac and Arabic Christian Thought". In the first of these four sections, Eva Anagnostou-Laoutides examines the ideas around the drinking of wine, finding its Christian expression in Pseudo-Dionysius to be ultimately Socratic but mediated through Proclus. Matthew Crawford envisages Cyril of Alexandria's "Contra Julianum" as a riposte mirroring in some ways Julian's "Contra Galilaeos". Michael Champion examines the idea of assimilation to God in the work of Dorotheus of Gaza, whose writings share with the philosophical tradition an interest in texts as transformative but have a special Christian emphasis, shared with Stoicism, on humility. Dirk Krausmüller argues that the "Tree of Porphyry" played a prominent role in the use of philosophical concepts in the Christological disputes of the sixth century and later, while Vasilius Adrahtas contrasts John of Damascus' theory of icons with Proclus' use of symbolism.

Under "Proclus the Neoplatonist" Dirk Baltzly looks at the relationship between personal and public virtues in Proclus' commentary on the "Republic". He finds that while Plato himself did not argue for the priority of one or the other, Proclus gave priority to the former. Essay twelve in this commentary is examined by Graeme Miles, who particularly notes the omission of discussion on "the descent back to the cave". He considers the reason for this omission to be the nature of the essay's addressees, whom he takes to be those at an early stage of philosophical education.

Moving on to "Pagans and Christians in Byzantium", Han Baltussen sees Eunapius' "Lives of Philosophers and Sophists" as a dossier of outstanding pagan intellectuals deliberately set against the Christian Lives of Saints. Given the religious character of late Platonism and the claim of Christianity to be a philosophy, convergence in their agendas is natural, but equally so is a divergence in their way of implementing them. One pagan philosopher, Pamprepius, is presented by Meaghan McEvoy, who highlights the striking fact that neither his paganism nor his efforts to gather pagan support for Illus' rebellion against Zeno appears to have damaged his standing among the Christian military elite of the late fifth century. Pagan and Christian dream theory is the theme of the final contribution in this section by Bronwen Neil. She envisages Maximus the Confessor's ethical theory as a combination of Aristotle's division between voluntary actions and those dependent on nature with Nemesius of Emesa's theory of providence. Maximus could thus argue in his trial for treason that involuntary dreams were not sinful. In the final section on Syriac and Christian Arabic, Nestor Kavvadas illustrates the problem in applying syllogistic logic to inter-ecclesiastical disputes. While the "jargon of logic" was popular among East Syrian leaders in the early Islamic period, Kavvadas surprisingly attributes this at least in part to the allure of Byzantine culture, rather than late antique Alexandrian Neoplatonism. The versions of Neoplatonist "Prolegomena to Philosophy/Aristotelian Philosophy" known in Armenian and Arabic are identified by Elvira Wakelnig as the sources of arguments against philosophy found in Ibn Bahrīz, an anonymous Tehran manuscript, and ?unayn, Arabic writings revealing acquaintance with the scepticism of Pyrrho and Sextus.

The individual contributions can thus appear somewhat detached and diverse, but several significant threads run through them. The influence of Proclus, for example, on subsequent Christian writers emerges in Pseudo-Dionysius' interpretation of the eucharist in the article on drinking wine, and on the use of symbolism by John of Damascus. Assimilation to God as the aim of philosophy both among pagans and Christians crops up both in the articles dedicated to Proclus and in that on Dorotheus of Gaza. Equally striking is the common perception among Neoplatonists and Christians of texts as transformative, to be read and interpreted within the context of a "school", evident here in the contributions both on Proclus and on Cyril and Dorotheus. Related to this is the production by both sides of literature both of polemic (in the contribution on Cyril) and praise (in that on Eunapius). Together with Christian use (indirectly) of Plato, there is also the direct use of Aristotle and Porphyry's "Eisagoge" in Geek Christological controversy and Syriac ecclesiastical disputes. The Neoplatonic Prolegomena to Philosophy and Aristotelian Philosophy are shown in the final article to be still influential in Abbasid era Christian Arabic.

For a synoptic view of the book's subject, historical and conceptual, the reader may turn to the first two contributions. Ken Parry outlines developing ideas among all the confessions here brought under the label of "Eastern Christianity", not only the Byzantine but also the Armenian and Syriac. These developments during the sixth to eight centuries paved the way for the famed efflorescence of philosophy in Abbasid Baghdad. Johannes Zachhuber confronts an issue at the heart of the volume's theme: what do the terms "philosophy" and "theology" really mean in this period, and how should contemporary scholarship use them? Despite the modern division of the academic disciplines, Christian thinkers of the period thought of themselves as exponents of "the true philosophy", while late antique philosophy culminated in a pagan theology. Nevertheless, the kinds of philosophy established by each group were different, and Christian thought constituted not a single school along the lines of earlier philosophy, but an "oversized" school ultimately bursting earlier scholastic norms.

It is surprising that John Philoponus receives only an occasional mention in the volume, since he is the major thinker of this period with the clearest claim to have been both a theologian and philosopher according to the conventional understanding of the terms, and that despite his epithet of "Grammarian". The opinion of Rashed and Chiaradonna is cited (on page 71) that "a general ideological framework" encompassing a plurality of divine entities, belief in the eternity of the world, and non-belief in bodily resurrection prevented any Christian thinker in antiquity thinking of himself as a philosopher. Yet all these ideas were rejected by Philoponus (and by the acknowledged head of the tenth century Baghdad philosophers, the Syrian Orthodox Yaḥyā ibn 'Adī). Still, no single book can cover all aspects of a broad subject. The individual articles are all informative and well researched, and taken together they, demonstrate that there is much of intellectual interest in the philosophy and theology of this time and place.