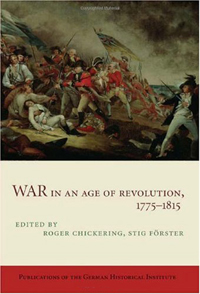 The inclusion of social, cultural, and gender approaches to the study of military history has produced new understandings of war and its impact on humanity. Whether narrow terms such as "old" and "new" are employed, the result is a broader understanding of military history. Nowhere is this represented better than in the collection edited by Roger Chickering and Stig Förster. Chickering provides an explanation of the genesis of the work: "The essays are a prequel to a series of volumes that have [...] taken up the problem of total war." (11) The five volumes that he cites are works edited by himself, Förster, and others that are derived from "five conferences that surveyed the growing purview of warfare from the American Civil War to the end of the Second World War." Chickering tells us that at these conferences, "a sense of discomfort" reigned over the definition of total war because "conventional understandings of total war rested on narrative assumptions about war in the early modern era, which we have not studied." (11) To address this problem, the Chickering school decided to hold a final conference. Thus, the present volume, a tour de force of the most current trends in military history, seeks to reinterpret the Revolutionary Wars from 1775 to 1815: were they based on a military revolution, the evolution of ancient regime practices, or the birth of apocalyptic total war?

The work is divided into three sections that follow a general introduction by Professor Chickering. Part I: "Perspectives on a Military History of the Revolutionary Era" contains six essays (Azar Gat, Beatrice Heuser, Ute Planert, Dierk Walter, Stig Förster, and Günther Kronenbitter). Part II, titled "The Growing Dimensions of Battle," likewise contains six articles (Timothy Shannon, Matthew Ward, Alan Forrest, Michael Broers, Jeremy Black, and John Tone), while Part III, "Civil Institutions and the Growing Scope of War," offers eight chapters (T.H. Breen, Jörg Nagler, Wolfgang Kruse, Donatus Düsterhaus, Karen Hagemann, Marion Breunig, Katherine Aalestad, and Mary Favret). Whether a conscious decision by the editors or an issue of space, the work does not end with a concluding chapter or final word. In his introduction, Chickering provides generous summaries of how each piece relates to the broad questions that the whole seeks to address. Thus, with some exceptions, this review will not attempt to do so.

Continuing the debate Chickering raises in his introduction, the authors who contribute to Part I wrestle with the question of whether the Revolutionary period represents a true "revolution in military affairs," at least in Europe. In particular, Gat challenges what he sees as the narrow arguments made by Michael Roberts and Geoffrey Parker concerning the issue of causation for a revolution in military affairs. Gat counters that military developments alone do not account for a military revolution. Instead, he provides the explanation that the centralized state's ability to harness its resources and field mass armies presents the actual revolutionary change. In her piece on the French military theorist and reformer Jacques Guibert, Beatrice Heuser rejects the idea that Guibert's ideas on warfare, particularly his Essai général de tactic, had a direct influence on the warfare of the French Revolution. Her main goal, however, is to investigate whether "Guibert's thinking presaged total war?" Settling on a definition of total war that includes genocide and the annihilation of the enemy nation, she concludes that Guibert did not prophesize total war, but instead a defensive war based on the lev&#233e en masse. Ute Planert picks up the contentious question of whether the French Wars represent innovation or evolution in military affairs. She concludes that "the wars of the French Revolution arose less as a revolutionary caesura than as a stage in an evolutionary process." (71) Planert insists that those who believe the French Wars offer an example of revolutionary changes in military affairs have overlooked the issues of compulsory military service and the relationship between the military and civilian population. Moreover, she argues against the idea that the French Wars saw the mobilization of entire societies for war. This provocative essay has much to offer, and while some will reject Planert's arguments and conclusion, they are well conceived. Dierk Walter's article on the Prussian military reformers plows a field thoroughly exhausted by overplanting. Walter asks questions that have long since been answered. Perhaps as can be expected from a social historian, he does not find anything "revolutionary about the organizational and tactical changes in the Prussian army" (98). A thorough understanding of the military campaigns of the Prussian army in 1813 and 1814 is necessary before making such a judgment. However, he recovers by offering the generally accepted conclusion that the Prussian people did answer the call to arms in 1813 so that "Prussia entered the era of nationalism and embarked on the road to modernity." (99) Stig Förster's article offers a definitive answer to the question if the French Wars represent the "first" world war. Arguing that the Seven Years War holds this honor, Förster maintains that the "fact that the French Wars turned into a World War was not due to revolutionary changes in warfare but to European expansion, which served as a catalyst for global war as most parts of the world became interconnected." (115) Countering Heuser and Planert, Förster proclaims that "this world war could end ultimately only in the complete defeat of the force that drove it. [...] [I]t is not surprising that all world wars in history tended toward total war." (115) The final essay of Part I, Kronenbitter's piece on Friedrich Gentz and the lessons of revolutionary war, while interesting, has no place in this work.

Part II offers a hard-hitting line-up of scholars who offer more than simple historiographic revisionism and pontificating by analyzing changes on the battlefield. Shannon's excellent piece on Native American warfare in North America from 1754 to 1814 adds to the discussions about the origins, impact, and legacy of colonial warfare debated by scholars such as Guy Chet, Stephen Brumwell, and John Grenier. Shannon finds that white settlers and Native Americans borrowed from each other's way of war to produce an "indigenous version of la petite guerre." (138) He argues that the struggle spawned a racialized radicalism that increasingly targeted civilian populations. Matthew Ward also explores the issue of la petite guerre in an interesting article on the use militias during the War of the American Revolution. Ward finds that American militias blurred the boundary between civilians and combatants to an extent never before seen in European warfare. He concludes Continental Army commanders such as George Washington and Nathanael Greene "made it increasingly difficult for the British to develop a military policy to reconquer the colonies and contributed to the final American victory." (174) Alan Forrest takes on the monumental task of debunking the idea that French revolutionary armies dispensed with eighteenth century logistical practices. Although a student of Napoleon's campaigns will know that he delayed the commencement of his First Italian Campaign in Spring 1796 for as long as possible to complete the organization of his supply trains, the myth that the French army lived off the land persists. Forrest concludes that the French revolutionary government remained well aware that battlefield success depended on supplying, feeding, and caring for the men. In fact, he finds that the ability of the French to overcome logistical challenges was due to the national effort in which everyone played a role. Michael Broers returns to his dissertation subject of Napoleonic Italy in an essay explaining the brutal impact of French rule. Terming the French conquest a "baptism of fire," (216) Broers makes the point that the progressive, modern advantages and institutions offered by French domination "were generally alien to Italian soil." (216) Broers's piece is a must read for French and Italian scholars. In an article titled "Naval Power in the Revolutionary Era," Jeremy Black again unveils his unrivaled skill of making historical connections and tying events on one side of the globe to those on the other. While the age of sail was not impacted by any revolutionary changes in naval technology, Black argues in favor of a naval revolution in military affairs because the scope of naval warfare was "total," not to be equaled until the war in the Pacific during the Second World War. Black offers an erudite explanation of the reasons that made the Royal Navy "modern" and superior to other navies. John Tone's essay on partisan warfare in Spain offers a convincing counter-argument to Charles Esdaile's revisionism concerning the role and impact of the Spanish partidos. Tone provides an explanation of the differences and results of urban and rural partisan warfare. He identifies who the guerilla was, why he fought, and who led him. Finally, he reminds us that the War of Spanish Independence does not qualify as a total war because the majority of the population did not participate.

Part III offers some of the finest examples of the "new" military history. At the forefront of this group are Katherine Aalestad ("Lost Neutrality and Economic Warfare: Napoleonic Warfare in Northern Europe, 1795-1815"), who sees the French Wars as the beginning of true economic warfare; Jörg Nagler ("Achilles Heel: Slavery and War in the American Revolution"), who finds that the mobilization of black slaves by both the Americans and British "left a paradoxical legacy" which in part challenged white hegemony and paved the way to emancipation in the North and the entrenchment of slavery in the South; and Wolfgang Kruse ("Revolutionary France and the Meanings of Lev&#233e en Masse"), who argues that the lev&#233e made "total" the claims of the revolutionary state on its citizens. </p> <p>As with all such works, the articles range in quality. The vast majority aim for historiographic revision and thus are mainly works of synthesis rather than original research. Missing from this impressive array of historians are the scholars who continue to revise what we know of the actual campaigns and battles. It is hard to believe that the historians of the "old" military history do not have something to contribute to a discussion on war during the Age of Revolution as well as a debate on the meaning of "total war." The question remains: while the editors have assembled a fine list of contributors with all genres from economics to gender, why are military historians of the traditional genre not represented?</p> <p class="italic" style="text-align: right">Michael V. Leggiere</p> </div> </div> </div> <div id="page_footer"> <div class="ie6_font_size" id="separator"></div> <p>issn 1618-6168 / www.sehepunkte.de <img height="10" src="/images/sp10.jpg" width="10"> </p> </div> </div> </body> </html>