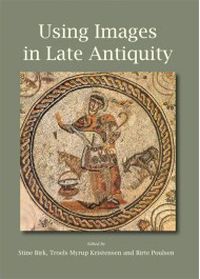 I am not really in favour of edited books that just bring a bunch of broadly unrelated articles together with little thematic purpose or argument. This volume is a classic instance of that genre - its introduction of 2 pages having nothing more to say than that images were important in late antique society and then listing the range of papers, all given at a conference in Rome in 2010. What is the point? How will anyone find anything written here in the long term? These are pressing questions in an era of ever more edited volumes (to what extent are they different from Journals in the field or from special issues of Journals?) and of the gradual move from print to e-publication. But the real point is that an edited book of different and sometimes contradictory voices can be a real theoretical as well as content-driven contribution to a field, but this needs careful theoretical framing and editorial packaging as well as a substantive introduction that presents the arguments at issue.

That said, it'd be a pity for this volume to be buried. It contains a number of very good papers by a very strong line-up of distinguished scholars, which are worthwhile in their own right although they have little specific to say to each other. This makes writing a review difficult - a ragbag of stuff can hardly be reviewed in anything other than a haphazard and rag-bag sort of way. The title ('Using Images') is entirely irrelevant and broadly meaningless, particularly given that a number of the articles collected here are not about images: Paolo Liverani writes about epigraphy, Ine Jacobs about architecture, Simon Malmberg about public monuments, Katharina Meinecke about architectural decoration; while Sarah Bassett and Lea Stirling deal with public or civic sculpture rather than flat art.

So here is a brief description of the contents. All but two papers are in English. The two in Italian, by Paolo Liverani on epigraphy and by Arnaldo Marcone on classicizing forms in early Christian iconography are both good, although the former is not about images per se. [1] The essays by Stine Birks on self-representation in Roman sarcophagi and by Troels Kristensen on column monuments as idols plunder their authors' larger recent book projects but effective summaries of some of their themes. Many of the other papers are excellent and informative. Eric Varner writes on recuttings of images of Hadrian into Maxentius and then Constantine (and takes in the arch of Constantine as well as statuary). Sarah Bassett addresses public honorific sculpture in late antique Constantinople (which must have been quite as full of such statuary as were Aphrodisias and Ephesus), although the survivals are a 'slim and battered' set of fragments: note that the bigger theme of late antique urban statuary has now been transformed by the online database on the last statues of antiquity. [2] Lea Stirling examines the important topic of late antique collections and canon-formation. [3] Trinidad Nogales Bassarrate supplied a very interesting account of late antique sculpture in Augusta Emirita in Spain, which rather whets the appetite for a more complete survey of late antique Spanish visual culture. Ine Jacobs contributes an excellent piece on temple demolition, adaptation and transformation in the history of the late antique city. Simon Malmberg discusses triumphal arches and gates of piety in capital cities - Ravenna, Rome and Constantinople. Hendrik Dey examines the theme of mosaic representations of urban centres, such as the Madaba Map - a very good topic. Birte Poulsen follows suit with a chapter on city personifications in late antique mosaics, also an excellent theme although one with significant sculptural comparanda. Katherine Dunbabin contributes a fine piece on mythology and theatre in the mosaic floors of the Greco-Roman near east. Finally, Katharina Meinecke, in the only paper to take the argument beyond the visual borders of the Roman empire into the east, addresses varieties of models (not only Greek, Roman and Byzantine but also Sasanian) in the decoration of the eighth century Ummayad façade of Mshatta.

Now this is in fact quite a good bunch of pieces. They do not make a collection and together they are less than the sum of their parts. This was not necessary. More careful thematic grouping by the editors and the commissioning of other pieces would have made a strong volume. Notably, in the light of Meinecke's venture east, one would have wished for more on Sasanian imagery and more on the interface of Sasanian with Greco-Roman (one thinks of the rich visual cultures of what are as I write those tragically afflicted cities in the Syrian desert - Hatra, Palmyra, Dura-Europos). Likewise, given the several pieces on mosaics in the Roman east, why were there not comparative papers on Islamic or Jewish mosaics or on mosaics in the west? The book is well produced and presented with a good number of colour illustrations at the back.

[1] Readers interested in the visual effects of the epigraphic in late antiquity should now consult Viewing Inscriptions in the Late Antique and Medieval World, edited by Antony Eastmond, Cambridge 2015.

[3] See now, for much more on the bigger theme, M. Gahtan and D Pegazzano (eds.): Museum Archetypes and Collecting in the Ancient World, Leiden 2015, especially the papers by Stirling and Bassett there.