Franz Posset: Marcus Marulus and the Biblia Latina of 1489 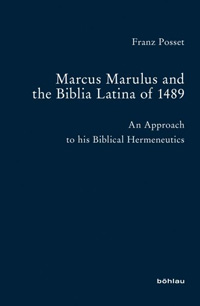 According to Franz Posset, Marcus Marulus (1450-1524) was "the Father of Croatian literature, the first Croatian Bible scholar, the catechist of the nation, and the lay pastor of the people" (210). He was born in the city of Split, received a humanist education there, and devoted much of his life to study and literary endeavors. Influenced by the Devotio moderna, this lay theological autodidact produced a number of works designed to promote good preaching and pastoral care in the region. Posset is quite familiar with Marulus' writings. This volume aims to demonstrate that Marulus' biblical studies were the foundation for most of his literary works in both Latin and Croatian. The annotations he left in the margins of his glossed Bible constitute Posset's primary evidence for Marulus' Christological hermeneutical approach. The volume includes a CD with very clear images of each page of the Bible so that the reader can see the marginalia firsthand.

The book is carefully organized with numbered sections in each chapter. Readers with a general interest in late medieval religious and intellectual culture will find the introduction, first two chapters, and conclusion of the book to be an interesting introduction to a figure not well known in the English-speaking world, as well as to his reading of the Latin Bible. Readers with more specialized knowledge of Marulus' work will find much detail in the intervening chapters to shed light on how the lay theologian's biblical annotations did or did not parallel his treatment of particular passages, persons, and themes in his own writings.

Chapter 1, "The Biblical Scholar in Context," presents Marulus as a humanist in the intellectually and religiously lively city of Split. Books printed in Venice were readily available. While there were a few ecclesiastical books offered in the local vernacular, the Bible was only available in Latin. Many of his writings aimed at the renewal of the church through good preaching and pastoral care. Although not ordained himself, he is known to have given some public addresses. Posset speculates that Marulus' efforts contributed to making a German-style reformation unlikely in Dalmatia.

Chapter 2, "The Latin Bible of the Lay Theologian," focuses on the Bible Marulus chose to purchase and annoted in study. It is a four volume Vulgate printed by Bonetus Locatelus in Venice in 1489. Importantly, the biblical text was printed with significant commentary: prefaces by Jerome, commented on by William Brito OFM, and postilla by Nicholas of Lyra OFM, with additions to Lyra by Paul of Burgos OP (often criticizing Lyra's openness to Jewish exegesis), and responses to Burgos often defending Lyra by Mattias Doring OFM. Posset stresses the high esteem for Jerome among many humanists and the cumulative wisdom of the interpretive tradition represented by Lyra and his respondents. Marulus seems to have read every page of these four volumes, leaving behind a series of annotations. The passages he found most significant received drawings of religious symbols, such as Jesus' initials, a cross, or a chalice and host. Moral lessons were highlighted with small hands (maniculae). Names of persons, places, and ideas were written as keywords in the margins. Underlinings, curly vertical lines, or hooks, are frequent, and are generally taken as the bottom tier of Marulus' hierarchy of markings.

Chapters 3-6 each take a volume of the Bible and offer highlights of both Marulus' annotations and the interpretive issues involved. Nearly all of Marulus' annotations are not on the biblical text itself, but on the commentaries. Posset presents what caught Marulus' attention as well as what he seems to have ignored. He further indicates which biblical insights Marulus used in his subsequent writings and which ones he discarded or replaced. He also illuminates how Lyra, Burgos, and Doring used various Jewish commentators on the Old Testament and the disagreements this raised among them. Posset's level of detail can be challenging for those who are not well versed in these materials, but it bears witness to the author's familiarity and very careful attention to his subject. The following example will illustrate the approach.

The book of Genesis was significantly annotated by Marulus; this is not surprising since it laid the foundation for a number of important issues for Christian theology in general and for Marulus' religious writings in particular.

Posset writes,
"In interpreting Gen 3 (The Fall of Man) Lyra introduced the concept of 'original righteousness' (iusticia originalis) which Marulus writes in the margin of f. 27. It is remarkable that the corresponding theological concept of 'original sin' is not mentioned here. Lyra only spoke of the 'first sin' (primum peccatum). Marulus enters a few more words in the margin of the comments on Gen 3: One is perizomata (loin cloths) of which he makes use in his Instruction (Book III, Chapter 8; on clothing for the body).
The topic 'original sin' is taken up in Burgos' Addition to Lyra's comments on Is 52; this merits Marulus' note pecc[atum] originale (volume three, f. 46v). When Marulus studies Saint Paul's Letter to the Romans (5, 12-14), he again comes across Lyra's notion of 'original righteousness' and the corresponding theological notions reappear: peccatum originale and originalis culpa (original guilt), but Marulus only enters the notions iusticia originalis and parent[e]m originalem (original parent) in the margin of f. 128 (of volume four). In his Euangelistarium, Repertorium, and Institutio Marulus appears to have neglected this subject as he has no entries on original sin. As difficult as it is to trace the impact of Marulus' Scripture studies in his literary opus, there is this surprising observation to be made: Although Marulus marked in his Bible for future referencing the notions of 'original righteousness' and 'original sin', he never appears to have returned to those theological deliberations." (74-75)

The volume's conclusion, "Summary, Desiderata, Outlook", helps to bring Posset's detailed discussions together. He stresses that Marulus read his Bible as an eager student, not as a polemical scholar asserting his own convictions and evaluating others' positions. He read in keeping with late medieval tradition, seeing Christ and the Trinity throughout the scriptures. Despite having learned some Greek as a young man, he did not pursue the humanist passion for original languages, but was reliant upon, and apparently content with, Jerome's Vulgate. History did interest him and many of the names and places highlighted in his Bible show up in his other works. Posset suggests avenues for further investigation, including following up on the connections he has indicated between Marulus' study of the Bible and his other writings.

Posset has also included a number of finding aids which will enable those with interest in particular themes or passages to make use of this volume. Appendices indicate the location of Christograms, Crosses, Maniculae, Eucharist/chalice and host drawings, and key theological terms via biblical passage, commentary text, and folio. The three indices cover names, scriptural references, and subjects.

The amount of careful detailed work that has gone into this volume is very impressive. Within the current scholarly interest in the history of reading and lay appropriation of religious texts, including the Bible, the evidence gathered here conveys a sense of a devout individual scholar at work without over-interpreting the sometimes enigmatic evidence.