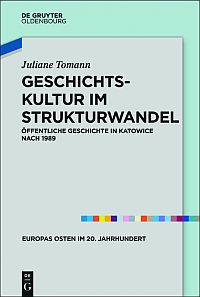 Applying secondary literature and seventeen interviews with local cultural and political figures, Juliane Tomann's newly published dissertation sheds light on how Katowice, infamous as an ugly working-class socialist dystopia, 'seems to be driven since 1989 by a reflex to catch up and wants to constitute itself with every means at its disposal to be as much a full-scale European city as the established Polish cultural metropolises Wrocław and Cracow' (2). To make the city attractive to investors and tourists, she argues, local politicians have rejected both the city's ethnically complicated history and its working-class industrial background. In this context, wherein prevalent German architecture narrates an urban history at odds with Polish memorial plaques and museum representations, Tomann promises to unfold an 'interesting example of public historical representation' (397).

Tomann spends her first five chapters on theoretical background with some historical context. In an early survey, she notes that after the economic upswing of the 1970s, locals took part in Solidarity protests and then suffered high unemployment after much industry closed after 1989. After years as an industrial city, Katowice was rebranded as a cultural centre; when Katowice's fine art museum became independent from Cracow, it was meant to imply to residents that the city was not just a playground for rapacious investors (31). A further and longer survey of Katowice as a contested Upper Silesian borderland in chapter 5 offers asides on architectural landmarks. While this section cites considerable literature, excellent English-language scholarship devoted to the city and region, such as by James Bjork [1] and Peter Polak-Springer [2], is absent; by incorporating findings from such work, Tomann might have transcended her use of the term 'Upper Silesian' as a catch-all for those in Katowice who have not historically identified as German or Pole; this category she reaffirms in the contemporary context using census data (38-39). In fact, identity in Upper Silesia was historically multifaceted with Catholic, localized, and overlapping, sometimes interchangeable national characteristics. Without deconstructing the term 'Upper Silesian', measuring its evolution, or furthering context on nationalizing forces, the author in many ways reinforces how a few elite political and cultural figures have projected 'Upper Silesian' as a category just as they have spoken for how 'the public' perceives architecture and identity.

The core of the work, chapters 6-8, examines the politics of identity in three major venues. Chapter 6 explores how museums interpreted urban history: both Katowice's city museum and the Silesian Museum generally repeated Polish national narratives and avoided German ones. Chapter seven, perhaps the most insightful part of the book, exhibits top-down identity formation and marketing in the context of Katowice's application to become European Cultural Capital, which the city initiated and financed in 2011. To challenge top-down marketing schemes of Katowice as a 'garden city' or 'city of modern architecture', Tomann infuses reflections from seventeen political and cultural elites. The slogan of Katowice as a garden city ignored the Germanness of early 20th-century garden suburbs, prompting interviewees to largely reject the garden city identity as being too constructed. Given that the slogan failed to suit the city, Tomann concludes, the authorities 'should conceive of a viable concept of the future' through a more 'serious' look to the past (410). More authentic for her was the city's marketing of its interwar classical modern architectural heritage as the artistic triumph of a supposed Polish Chicago. Finally, chapter 8 investigates how two prominent media figures, Michał Smolorz and Kazimierz Kutz, questioned nationalized official discourse and urged that greater attention be paid to 'Upper Silesian' (which the author refers to as an 'ethnie'), rather than just Polish or German identity (378). This was largely in agreement with positions taken by other leading cultural figures interviewed.

It is perplexing when Tomann claims that Katowice, spared significant wartime destruction, largely lacks the 'palimpsest-like' layering that affects most other Polish cities (163). Not only does Tomann herself raise exceptions like the central marketplace cleared of its 'German' architecture after 1945 or the Silesian Museum and Great Synagogue torn down by the Nazis: she opens her book with the brutalist main train station demolished in favour of a sterile shopping mall. Furthermore, she exhibits how monuments, inscriptions, and many structures have been imbued with new meanings. A building need not have been razed to fit the palimpsest metaphor coined by Andreas Huyssen [3] (2003), who is not cited here. The sheer mass of new monuments, street names, and encoding of urban space after 1989 makes Katowice a classic palimpsest with many buried layers.

In the attempt to make Katowice exceptional, this work also misses ways in which Katowice reflected trends in other Polish cities. Tomann repeatedly contrasts Katowice with neighbouring rival Wrocław, which apparently embraced German history after 1989 because it lacked Katowice's 'incomparably more complex' identity (398-399). This claim is hard to accept, given evidence by scholars such as Gregor Thum [4] that postwar Wrocław was resettled by an extremely diverse 'melting pot' from across pre-war Poland and since 1989 has been selective in affixing German elements to official identity. Like Katowice, Wrocław's post-war identity was imbued with a future-oriented striving toward modern 'progress', and Tomann's evidence clearly shows that, like other formerly German cities, Katowice's history was fused to an eternally Polish national mythos that sustains some staying power today.

Ultimately, this book illustrates how a few cultural elites have perceived and sometimes contested official marketing campaigns for a post-industrial city. Given the importance of assessing how historical imaginaries changed (and showed continuity) after 1989, as well as the rich findings from interviews, especially in its latter chapters, this book should be referenced by specialists on Upper Silesia and post-communist cities.