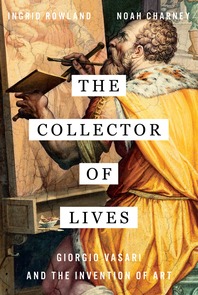 Nobody interested in Renaissance art and culture can ignore Giorgio Vasari. His Lives of the Most Excellent Painters, Sculptors, and Architects (and other texts) remain essential for art historical research, however much maligned the Aretine artist and biographer may have been during his lifetime. We are used to mining the Lives to find out about better and lesser known artists. We try to find out how contemporaries may have considered the artists and their œuvre. The biographies are also useful for tracing the background, chronology or afterlife of specific works of art. Vasari's own artistic works may be a different matter but his Lives continue to be successful to this day even though their contents are probably as close to real scholarship as Suetonius's Vitae. Likely, that is the reason why both are a great deal more captivating than most conventional history books. Although Vasari added his own biography to the Lives, a carefully considered modern biography still needed to be composed. Rowland and Charney attempt to fill this gap and manage to do it rather well.

Vasari came from lowly origins, his family had been producing pottery at Arezzo, and he became an artist quite by chance. He was disliked by a great many of his contemporaries and in response always tried to improve his own pedigree and status. He was not the only one to do so at a time when everyone - even the ruling houses - claimed noble or interesting ancestries that were largely imaginary. In Vasari's own modest case, he turned his Aretine grandfather, Giorgio the Elder, into a connoisseur and collector of ancient Etruscan and Roman pottery, bucchero and terra sigillata, and thus into more than a mere artisan. True or not, it was a sleight of hand that eventually helped the younger Giorgio with the ducal Medici.

Vasari was an artist and biographer of artists. He was one of the first art historians and theoreticians of art. He was court artist, architect and impresario at the Medici court in Florence where he settled after an eventful life spent largely outside Tuscany. He not only filled considerable numbers of commissions for the duke but - probably - gave advice based on the knowledge of his artist and antiquarian friends. Vasari also wrote to a great extent about people he knew. Some he even liked and admired, in particular Michelangelo. He worked with an agenda in mind, since he wanted to prove that Tuscan, really Florentine, artists were best. He was convinced that hard work made you a better artist and he appreciated the importance of drawings, since they expressed the creative power of design / disegno. Thus he was (one of) the first to preserve, study and collect what others used to neglect or were at great pains to destroy.

In fact, it was the young Giorgio's own talent and proficiency in disegno, his family's ambitions and the early connection to the Medici (Ippolito, Alessandro and Caterina) via Cardinal Passerini that provided the first entry to a world of art and patronage in Florence. Soon Vasari was being taught by Pierio Valeriano and Michelangelo Buonarroti, he eventually joined the workshop of Andrea del Sarto, back in Florence after a spell in France, and then that of Baccio Bandinelli. This life of diligent apprenticeship was crudely interrupted by war fought in Italy between France and the Holy Roman Empire, including the Sack of Rome in 1527 and affecting a great many smaller cities along the way. In Florence, the temporary absence of Ippolito de' Medici provided the opportunity for an uprising and ensuing return to a republican government. For young Giorgio the events meant the forced return to Arezzo and the temporary loss of ties of friendship and patronage he had been able to forge.

But not for long: his grasp of disegno made him noted by Rosso Fiorentino. Financial and familial pressures, however, as well as the realisation of his own artistic limitations, made Vasari consider a new career as goldsmith. Thus for a while he worked in Pisa and when he tried to get back to Florence or Arezzo, he found himself diverted to Bologna by the ongoing warfare. Thanks to this lucky escape he was at the right place in time for the coronation of Charles V and participated in the creation of triumphal arches for the event.

Thus, from the start, Vasari's life and career were based on his understanding of disegno, his familiarity with Michelangelo, his friendships and enmities with fellow artists, his connections to the Medici and plain luck. This pattern would continue to his end and give him the opportunity to show his mettle in many Italian cities and courts. Nonetheless, even the start of the publication of his Lives with the ducal press of Lorenzo Torrentino in 1550, did not suffice to let him settle in Florence. Driven out by his enemies and invited by Julius III, he went back to Rome yet again to enjoy papal patronage. Only from 1555, Vasari's itinerant life-style became more quiet, when he joined the court of Cosimo I as a high-paid artist and impresario. He was given important commissions at the ducal palace and earned appreciation for his teaching (Academia del Disegno) and writing (second edition of the Lives). Although he still travelled between Florence, Rome and Pisa, filling commissions there and in other places, the centre of his life was now at the Medici court in Florence. His long-time employment by Cosimo I meant that they became companions in their respective roles as patron and artist.

Rowland's and Charney's book on Giorgio Vasari as a "collector of lives" is a very welcome addition to what we know so far about the Aretine artist, architect and goldsmith. It follows to some extent the template of Vasari's own literary work by letting one story flow into the next, often taking side paths and only returning to the main narrative after many excursions. Indeed, one of the highpoints of this work is its serendipity that would most likely have been appreciated by Vasari and his contemporaries. It tells the history of his life and work, of his intentions, ambitions and goals, from the artist's and author's perspective and, most interestingly, takes him seriously. The only thing perhaps to be criticised, in my view, is that the book seems to be undecided whether to present itself as a scholarly or as a popular book. Both types of audiences will find plenty to engage, interest and amuse them but at times both language and tone are a bit irritating. Since the book opens many connections and perspectives on Vasari, the arts in sixteenth-century Italy and court life in early-modern Florence, it is much to be recommended to students of art history as well as to anyone wishing to find out more about "renaissance" arts and artists by full immersion.