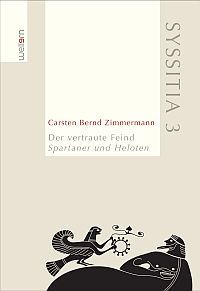 The prevalent notion that persistent hostility between Spartiates and Helots decisively shaped Spartan culture is contradicted in this book, a revision of Carl Bernd Zimmermann's recent (2018) doctoral dissertation. While Zimmermann agrees that tensions between Spartiates and Helots existed, he does not think Sparta was in a permanent state of alarm or in constant fear of the unfree rural population, nor that this fear strongly shaped Spartan customs and culture. This of course contradicts Thucydides' notorious statement at 4.80.3, αίεί γάρ τά πολλά Λακεδαιμονίοις πρός τους Eίλωτας της φυλακης πέρι μάλιστα καθειστήκει (11-15), a variously translatable phrase whose basic meaning is "Many matters for the Spartans had always been established with regard to security (or precautions) against the Helots". Zimmermann even goes so far as to suggest that that famous passage may be a post-Thucydidean gloss inserted into the manuscript by an editor (14, footnote), an audacious or at least bold suggestion.

Zimmermann's thesis goes against not only Thucydides but most scholarship, which sees persistent conflict (potentially visible as a Marxian class struggle) between Helots and Spartiates as the most crucial determinative factor in the shape of not only Spartan history but Spartan culture. This was de Ste. Croix's view, and one also expressed by Paul Cartledge in his remarkable 1987 book Agesilaos and the Crisis of Sparta. Cartledge based his view on sources such as Plutarch's Lykourgos 28, which gives Aristotle's claim that the Ephors (or perhaps the Spartiates in general) "were in other ways cruel and harsh toward the Helots" (καί τάλλα δέ τραχέως προσεφέροντο καί σκληρώς αύτοίς) such as the Ephors declaring yearly war against the them.

The argument that Spartan-Helot relations were not characterized by extreme fear and hatred had been argued forcefully by Richard Talbert in his 1989 article "The Role of the Helots in the Class Struggle at Sparta" (Historia 38, 1989, 22-24) and a few others before and after this. In this book, Zimmerman extends and amplifies the argument of the Talbert camp as thoroughly and meticulously as humanly possible. Whether one finds oneself in agreement with all of Zimmerman's conclusions or finds some of them perverse, one admires the painstaking depth and breadth of his research.

One of the first things that authors must do immediately in any work on Sparta is to situate themselves and their arguments vis-a-vis the so-called "Spartan Mirage," the notion that images of Sparta since antiquity are inaccurate due to our sources' admiring, hostile, or ideologically-laden distortions. Zimmermann directly addresses this set of issues early on in the Einleitung of his book, stating that we cannot simply dismiss our informants' statements as examples of a "Mythos Sparta" (3). On the other hand, he tempers this too much in a footnote on that same page, arguing that our desire to maintain and uphold the credibility of our ancient sources should not blind us to arguments against an all-dominating fear of helots in Sparta. Are we back to Square One? [For more on the Spartan Mirage, see Timothy Doran: Spartan Oliganthropia, Brill 2018, 12-18].

After the Introduction, the book contains five chapters, a conclusion, and bibliographies and source indices.

Zimmermann is at his best when (lightly, carefully, reasonably) challenging certain elements of any overly-crude form of the thesis of permanently negative relations between the Spartiates and Helots, and against the notion that Spartiate-Helots relations were the prime determining factor in the peculiarities of Spartiate culture. He argues that the relationship between the two groups fluctuated throughout time, and that each group was heterogenous to begin with. This is fair. However, he then argues that the individual cases in which something like a fear of helots can be ascertained among the Spartiates were not really related to each other, were structurally different from one another, and provoked a great variety of reactions on the Spartan side (6). The issue here is whether Zimmermann is seeing more diversity in response than there actually was. This question is related to a larger one in human nature: some people seem to be "lumpers" and others "splitters" when it comes to analyzing any phenomenon.

Several valuable, although not always convincing, analyses appear in this book. One is whether the Peloponnesian League and several of Sparta's supra-regional alliances were aimed solely or primarily at being able to demand aid from the contracting parties in the event of a helot revolt. Here Zimmermann shows a good attention to detail in the treaties, and makes his case well. His treatment of the Kinadon conspiracy of ca. 400 BC is also worthwhile to think with. He does interesting work on the Krypteia as well, arguing that its characterization as a helot-suppressing force is not entirely correct. At times, however, Zimmermann's arguments seem perverse.

Herodotus' passage noting that helots were obligated to mourn when one of the two Spartan kings died is, in Zimmermann's thought, evidence that the Helots were integrated into the Spartan state. Zimmerman uses this supposed integration to deny that helots were ready and waiting for opportunities to revolt (4). An obligation to mourn, presumably enforced by punishment, cannot be seen as "integration". As Jean Ducat detailed in his 1990 opus Les Hilotes (Supplement au BCH 20), a variety of cruelties were used to suppress the Helots. Forcing them to mourn cannot be reasonably defined as "Integration der Heloten in den Staat" (4).

Similarly, when Plutarch tells us that helots captured by Thebans in Lakonia in 369 refused to sing songs of Terpander and Alkman because their masters did not want this, Zimmermann sees this as a sign of Helot respect for their masters' wishes, rather than a sign of continuing trauma from coercion.

Another is Zimmermann's long, well-informed discussion of Thucydides' passage regarding the mass-murder of 2000 helots. Zimmermann's analysis is intelligent, yet the obvious necessity that a negation of the mass murder will be necessary for Zimmermann to support this book's overall thesis makes the section too programmatic, as well as methodologically unconvincing. Zimmermann argues that there is actually no suitable place for this crime to be found either before or after the Brasideioi were dispatched (21). Suitable to whom? This kind of logic does not work. Human and non-human history are full of events that seem, or have seemed, inexplicable only because we do not have enough information to understand their context. In ancient history, it is not sound methodology or epistemology to discard testimonia like these simply because they are not as fully-detailed as we would prefer.

A final problem I see occurs with Zimmermann's treatment of the Boiotian army nearing Sparta in winter 370/69. Xenophon 6.5.28 tells us that the Spartan government officials promised freedom to any helot who volunteered to join the Spartan army against the Boiotian-led forces. 6000 helots joined. This huge number scared the Spartans. The Spartans only became less afraid when mercenaries from Phlious, Pellene, Epidauros, and Corinth tipped the balance. Zimmermann's argument against this meaning for this passage is strained. He has taken Talbert's and others' argument to its logical conclusion.

Has he taken it into absurdity? Each reader must decide. I remain unconvinced. I see the helot revolt during the earthquake of the 460s as quite serious, Kinadon's conspiracy as deep and comprehensive, and the creation of the neodamodeis resulting from Spartan oliganthropia and inability to field an army, rather than as a sign of good Spartan-helot relations or desire to integrate helots.

Yet I am nevertheless impressed with Zimmermann's nuanced attention to detail, and his creativity in constructing such a thorough, comprehensive argument. This book will remain useful in the same way some of Erich Gruen's recent scholarship on ethnicity in the Ancient Mediterranean does [most notably, the chapter on Tacitus and the Jews in Rethinking the Other in Antiquity, Princeton 2011, 179-196]: as a deliberate provocation that some may regard as contrarianism, yet others as a refreshing foil against which to test one's suppositions regarding (what seem to be) the obvious meanings of an array of ancient texts. And in Zimmermann's view, detaching the peculiarities of Spartan culture from a monocausal explanation of "fear of Helots" allows the historian and anthropologist more freedom in determining causality for Spartan oddness. For these, we can be thankful.