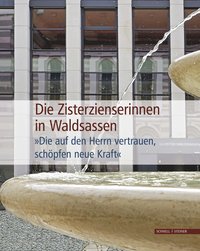 This fascinating volume contains twenty-two original scholarly essays with numerous illustrations and photographs, several forewords, an opening prayer, and a detailed appendix that includes information about the authors, several timetables, an index and more. The occasion for the impressive publication was the 25th investiture anniversary of Abbess M. Laetitia Fech O.Cist. in 2020, who was elected and consecrated as the fourth Abbess of Waldsassen in 1995.

The Waldsassen monastery, one of the earliest Cistercian houses in Germany, was founded as a male institution in 1133. It became an imperial abbey in 1223. Vacated under Protestant pressure between 1560 and 1661, it was re-established in 1661 with great splendor, as the remaining Baroque library and other architectural structures demonstrate. The monastery was abandoned once again in 1803 because of secularization policies. With great effort and the support of the Tirschenreuth district, Cistercian nuns took it upon themselves in the fourth era of Waldsassen's turbulent history to re-establish a viable female monastic community in 1864. Waldsassen eventually grew to become the largest Cistercian female monastery of its time. To support themselves financially and to contribute to the community at large, the nuns opened a boarding school for girls and young women.

The essays are organized chronologically with an emphasis on historiography and architectural design. Historical topics include detailed studies of Waldsassen's monastic life past and present, the relationships between Waldsassen monastics and secular authorities, the district and town of Tirschenreuth, and other monastic orders such as the Franciscans. Essays with a focus on architectural design offer meticulous discussions of the relatively new monastic church, the Baroque palace, basilica, and library, and contemporary garden designs.

While the book title suggests a primary focus on the Cistercian nuns themselves, only two essays deal explicitly with their presence in Waldsassen. Camilla Weber presents a broad historical overview in her chapter, "Die Geschichte des Zisterzienserinnenklosters Waldsassen seit der Gründung im Jahr 1864", and Peter Pfister's essay "Der Konvent der Zisterzienserinnenabtei Waldsassen 1864-1960" reveals new insights into the nuns' daily lives as gleaned from the extensive monastic archives, including rarely seen photographs. However, a closer look at the essays uncovers a steady presence of the community of nuns in several ways. To begin with, the striking architectural renovations of the monastery's golden Baroque era structures and artisanal details, which are discussed in such detail in this volume, are due to the remarkable leadership and vision of Abbess Laetitia Fech, who committed her abbacy to a long-term rebuilding effort with the assistance of local, regional, national, and international expertise and financing by private and public donors. Secondly, the collection as such represents an unusual synergy between religious and secular perspectives.

Whereas the scholarly articles follow established academic norms of scientific objectivity and discursive practice, Abbess Laetitia Fech insisted on including the book's sub-title, "Die auf den Herrn vertrauen, schöpfen neue Kraft" (Jes 40,31), a biblical quotation and personal motto that also decorates the monastery's fountain. For the Abbess and her community, a living spirituality expresses itself in and through architectural and historical frameworks. As the motto suggests, the remarkable recovery of Waldsassen as a vital destination point and economic hub for the region and beyond was made possible by faith in Divine guidance. For example, the new monastery gardens include an experiential section with a large glass installation of the world-renowned Benedictine Abbess and eco-visionary St. Hildegard of Bingen (1098-1179). The medieval roots of female Cistercian spirituality are also visibly manifest in some of the relics for the newly renovated chapel (completed in 2009), which include remains of St. Gertrud the Great (1256 - ca. 1302) and Bl. Ida of Louvain (d. ca. 1300). Peter Pfister's above mentioned study of monastic archives includes a detailed description of a female student's healing experience in 1887 that the convent understood as miraculous. The miracle led to the creation of a Lourdes grotto and increased devotion, including pilgrimages, to the Virgin Mary of Lourdes. For the Waldsassen community of nuns, the co-existence of secular scholarship and lived spiritual experience thus appears to be harmonious and mutually enriching.

The volume may also be approached as an invitation and baseline for further research on Cistercian women's history, spatial preferences, and spirituality in Waldsassen to unpack the promise of the title, which the collection does not keep as fully as it could have. Historiographical topics that deserve closer attention include women's monastic life during the Nazi regime and the Second World War. For example, as Camilla Weber notes in passing, eight nuns were suspended from teaching, because they refused to raise their arms in the "deutsche Gruss". Given that the concentration camp of Flossenbürg was only a little over forty kilometers away, it would be extremely important to research the context of the nuns' suspension. The convent also kept in touch with Therese Neumann (1898-1962), the controversial stigmatic visionary from nearby Konnersreuth, whose relationship with the Nazi regime was tenuous. The Waldsassen nuns provided detailed scientific data through close monitoring of Neumann's ecstasies to analyze the nature of her stigmata. Neumann's cult still flourishes today, but there is little research that explores the relationship between the convent and the seer; perhaps the newly available monastic archives can shed new light on this important chapter of Catholic women's spirituality in the modern era.

Remarkably affordable and thorough in its research, the volume will assist visitors to Waldsassen and experts in the field of Cistercian history, spirituality, and architecture to appreciate the site in its past and current configurations. As is true for any substantial scholarship, it also invites further study and reflection.