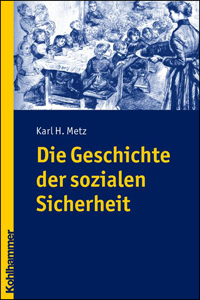 This is a most ambitious book. Metz surveys the history of social security from antiquity to the present and ends by peering into the future. His history is divided into an era of hunger and an era of consumption. In the first of these social assistance (soziale Hilfe) was directed towards security from starvation; in the second, in which we still live, it is directed towards a secure share of consumption. His concept of what is meant by security is highly sophisticated. In addition to the momentary security of individual physical existence or consumption, it includes a sense (Bewusstsein) of the future and the security of the social order on which all this depends.

The transition from the first to the second era is placed roughly at 1800, a little early one might think, but that choice makes it possible to deal with the preconditions, mental, technical and political, of the new era. The time covered is astonishing. Few writers have attempted so extensive an overview. Equally impressive is the range of different political systems, from Greece and Rome in antiquity, across western Christendom in the Middle Ages with an increasing focus on the areas of urban development. In the early modern era separate attention is paid to the territorial states of France, England, Scotland, and in the area of the Holy Roman Empire to Prussia and the Habsburg territories. In the nineteenth century the focus is on Great Britain, France, Prussia and the new German Empire, to which are added Sweden, Austria, Italy and the USA in the era since the First World War. After reaching the present the book returns to the beginning to survey the history of four highly relevant factors: work, health, old age and knowledge.

All this is achieved within 250 pages of text. It would be unreasonable to expect much detail of exposition or explanation from such a bird's eye view. There are bound to be over-simplifications and mistakes. However, in those areas familiar to me, mainly Great Britain and Germany, there is evidence that the author knows the details even if he does not mention them. With a few exceptions the mistakes are minor ones.

One exception is worth considering. The "Entstehung der Sozialpolitik" in the period 1800-1914 is structured round a British-German contrast with France as a late-comer of a different kind on account of its social and political structure. (127). That British-German contrast is expressed in terms of two kinds of state, a weak state and a strong state, meaning Great Britain and Germany respectively. On German Sozialpolitik Metz writes: "In Deutschland hatte die Authorität des starken Staates vom Aufgeklärten Absolutismus nahezu fugenlos zur staatlichen Sozialpolitik übergeleitet" (95). That overlooks the fact that the state that did most of the Sozialpolitik in question was the newly founded German Empire which lacked any authority from the past whatever. To make it function at all required complex diplomacy between the Reich and the federated states, in addition to the management of parties in the Reichstag, which were in turn dependent on elections. As Metz was to say later, the strength of a state depended on its control of material resources, in other words on its power of taxation. In those terms the Empire was particularly weak and Bismarck's successive efforts to increase its control were frustrated. That was why his ministers were to develop a Sozialpolitik that depended on social insurance, much against Bismarck's own inclination. One contrast between the German Empire and the allegedly weak British state was the far greater degree to which British social policy relied on taxation, both in the nineteenth and the twentieth century.

The reason for this misconception can be found in the systematic exposition of these concepts in a brief theoretical chapter towards the end of the book (238). That explains that states develop their strength or weakness primarily in war, but that the strong will attempt also to exercise strong control over society, and will apply the resources and bureaucratic institutions first developed in war for that purpose. To say that they would try is, however, not to say that they would succeed. Take the case of England. At the heart of English history in the seventeenth century, as it is usually presented, lies a conflict between King and Parliament over the control of taxation. Once that conflict had been resolved, the British State became very strong in war, as long as that war had the support of the major interests in society represented in the Parliament. That is a fact that the long eighteenth century from 1689 - 1815 repeatedly demonstrated.

Historians know a great deal about the control over taxation in the various states of Europe and its implication both for their strength in war and for their ability to pursue domestic policies. But these matters are not easily subsumed under the simple labels of a strong or weak state. Metz has much of value to say about Liberal theories of the market and of society. But the determination of Liberals to ensure effective control over taxation is passed over in silence, as is the similar determination of the champions of the German federated states.

Even more central than the contrast between strong states and weak is that between strong and weak technology (starke und schwache Technik) which serves as explanation for the division of the book into two eras. What characterised the many centuries during which mankind lived under the constant threat of hunger, aptly called the Überlebens-Gesellschaft, was its reliance on human and animal energy, and he might have added, that of wind and water. He dates the starke Technik, that characterised what he sometimes calls the era of consumption and sometimes the era of security, from around 1800. For Metz, starke Technik is essentially the tapping of new sources of energy, from coal for the production of steam and for the smelting of iron, to be followed by other sources of energy at later stages. This is the traditional picture of "the industrial revolution", with which economic historians have long been unhappy. Like all simple explanations it takes too much for granted, e.g. why the steam engine should have been taken up, why those concerned with production and transport should have regarded it as something that was needed. The problems to which it came to be the answer were themselves the result of recent innovation. If we take no notice of innovations in merchant practice and organisation, in the use of water-power for production and of horse- and wind-power for transport, we shall not understand why it was worth investing in this untried technology. Thus the book is strong on contrasts but weak on explanations of change both here and elsewhere.

A brief overview of this kind essentially relies on the appropriateness of its organising concepts. To express reservations about some of these is not to deny the fruitfulness of many others in this stimulating book. It can be expected to arouse interest in the subject among students who might have thought it otherwise too dry and complicated. But read on its own, it runs the danger of generating new and misleading orthodoxies. It is a good book with which to teach the interested student that on reflection things are not quite a simple as they seem.